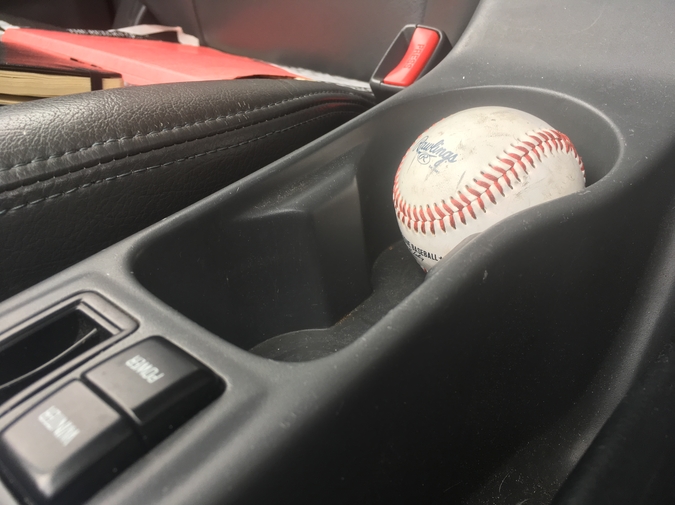 1. The movie makes it seem easy. Too easy. You say, “Hey dad, you wanna have a catch?” your voice wobbling like a quarter done its spin. He nods, moved by the mere suggestion, “I’d like that.” But when you try it after school, he won’t shirk work which sucks because you’re shirking homework. You thought there’d be much more father/son shirking. “Sorry, buddy,” he says, “gotta finish this.” This turns out to be one of his famous Rum Runners (tequila, Kool Aid mix, lemon wedge), a call with a client that sounds more like a call with a friend and a 46-minute nap. Disappointed, but you realize Ray Kinsella didn’t have that catch with his dad until the end of the movie and you’re at beginning of yours. There is much work to be done.

2. Your Little League team needs help so your dad, under heavy lashes of mom guilt, volunteers. He coaches third base, just like Riken’s dad. One game when you’re rounding third on a slow trot—a home run that’s mostly a playlist of errors—he doesn’t slap your hand or butt as you pass. He does shout, “Don’t forget to touch home plate.” Which is humiliating, a fierce rival to, “Don’t forget to wipe your ass.” Before each practice he asks you to squat behind home plate so he can get the pitching machine aimed in the strike zone. He pops balls through at 43 miles an hour. You catch them, most of the time, and roll them back. Catch, roll back. He adjusts until it’s close enough.

3. Orioles game, box seats at Camden with dad’s numero uno client. Free hot dogs, chicken tenders, popcorn and chocolate chip cookies. Dad and the client come outside to the seats to watch Ripken hit. With a full count Cal gets around on one and knocks a long loop into right field, one bounce and over the wall. “Ground rule double,” you say. “Actually,” the client says, “it’s an automatic double. Ground rule has to do with the actual stadium, like if a ball gets caught in the ivy at Wrigley.” Dad turns to you, “See?” he says. “You learn something new every day.” They go back into the box and do not come back out. When you’re leaving, the client tosses you a bag of peanuts and you’re not expecting it and your hands are close to full and it’s a bad toss. So you drop it. “I thought you said he played centerfield,” the client smirks at your dad. “I didn’t say he played well,” your dad says and you laugh with them because their gang outnumbers yours.

4. You ask him to have a catch the day before your birthday. You’re not one of these “I get the whole week to celebrate” assholes, but you figure it could count as a gift, kind of a shitty gift, but you remain optimistic there will be other things to unwrap tomorrow. When he says no (actually, “No can do, amigo” which makes it more of a punch than a pinch) you go to your room, lock the door and rip up the Cal Ripken, Jr. rookie card he gave you last Christmas. You hoped for a feeling of righteous revenge. But instead you’re flooded with embarrassment and shame. That card was worth $22 and going up every year. You just tanked your first investment. Happy birthday.

5. High school is about finding yourself, and even though you spent years tracking Waldo and Carmen San Diego, you remain elusive to your detective self, who smokes bummed cigarettes and can’t seem to wedge into the cool crowd. You get cut on the last day of tryouts for Freshmen baseball, first day of tryouts the next year for JV. By junior year, you’re over it the same way your girlfriend from the all-girls Catholic school is over you. But high school baseball is not having sex with Lucas Grabzy, only your ex-girlfriend is. When your dad gives you a ride to a friend’s house, you test the water, see if any friendship has metastasized. “Girls are such a pain in the ass,” you say. By the end of the conversation you imagine you’ll both be laughing and splitting a beer. But he just nods and twists up the radio—“Red Red Wine,” the UB40 version—which feels like he’s making fun of you.

6. Once in college, when you’re talking to your mom—lying to your mom really, because no mother needs to hear her son drank 11 beers and threw up on a sorority lawn and ran from campus security and passed out in a stairwell—she takes a break from gossip about your ex-girlfriend and addresses your father off-receiver. “Talk to him,” she says. “Can’t now,” you hear him say on the move, “gotta work.” But he’s semi-retired and it’s Sunday. Maybe he’s going to have a catch with a neighborhood kid. Someone better looking, more athletic, doesn’t steal his cigars or beers. It’s your fault, you’re a shitty, disappointing son. If you could just—but mom’s back in full swing, thinks maybe your ex-girlfriend has “the opioid addiction.”

7. In the original cut of the movie, Ray says, “You wanna have a catch?” But test audiences were disappointed with the complete lack of father-son acknowledgement. The word “Dad” was dubbed in during post-production. But at no point is there ever any outward recognition from the father. He never uses the word “Son.” You always have to watch the movie alone because this part makes you cry.

8. On your older sister’s advice, you go to HR and ask about the bereavement policy. There is none. So you take two days of vacation, leaving you with one day for the rest of the year. Your room at home now has a treadmill, which is what killed him. Well, it didn’t come after him or anything, dad didn’t sleep with the treadmill’s wife, but he was supposed to use it. Every day. Didn’t. Mom wants to add things to the coffin that he loved. You suggest his baseball glove and the embarrassment is quick, red coils in the toaster right when you push the lever down. Your mom’s look—grief chewing confusion—does not help. A thought plows through a Stop sign and crushes your brain: Dad doesn’t like baseball, didn’t like baseball. Never did. You don’t know what he liked. It’s too late to ask him and he won’t be walking out of a cornfield to tell you. You’ll have to try having a catch with your own son or daughter or best friend or co-worker or neighbor or mail carrier or maybe that part of your life, that part that once seemed so important, is just over. You’ll find something else to fill your days and your heart.

9. But you have a son. His main talent is destroying diapers, then taking six hours to put on a jacket, then confusing verb tenses, then talking for the entire dinner about…you’re not sure. It started off simple enough, school and recess, but then a huge gorilla got kidnapped and put in jail, but escaped because he knew the secret password, and then a bomb blew his penis off? Your hopes remain high. Maybe a musician (he requests Beastie Boys right when his butt hits car seat), maybe a screenwriter. More likely a Project Manager. Or a Loan Clerk. Or a Masseuse. Or a Realtor. “I did it,” he’ll say one day over the phone from a city where he’s trying to break in. “I did it. They made me Senior Account Manager.” Will you still be proud? You’ll say you are, of course, but will you be? Really? One spring weekend, your son finds you in the garage and asks you that same question you asked your dad. But it’s not nostalgic. Not beautiful or profound. It’s bad timing. You look down at the malfunctioning garage clicker in your left hand, which needs new batteries, the tiny kind you’ll have to spend the whole afternoon tracking down. “Can’t now, bud,” you say, “maybe later.” You’ve been using maybe as a shield and it’s worked for many years. But the look on your son’s face tells you he understands now that maybe means nope. And later, when you finally find the right battery—well, not in person, but you find out where to order it online—the feeling terrorizes you. Adult life is all mindless and menial errands designed to fatten your brain before the slaughter. One day it all changed, and it wasn’t even marked on a calendar. So instead of raising a beer to mark the end of an era, or running through grass barefoot, the air sweet as soda, the sun warm on your forehead, you were in a cubicle, you were in a meeting taking notes on Q3 projections, you were in the bathroom, again, trying to murder 10 more minutes. It’s like you’re in a different dimension. Kids try to pull you back into the good place. “Come to the light,” they shout, but adult activities are best done under cover of darkness. You finally understand your dad. Sorry, you want to say. I’m so fucking sorry. The two worlds, they’re not compatible. The only reason it worked in the movie is because the dad was a ghost, didn’t have to worry about little things, big things. Any things. You want to tell this to your son, but he won’t understand until later. Until you’re gone. Until he has a child of his own. And the cycle will repeat and repeat and repeat and none of us will live long enough to know the people who made us and even if we get a quick preview it’s usually not something we want to see and we can ask questions to a headstone or an ash-spreading spot, but the answers will be imagined and once they’re gone it’s done forever and isn’t that really something the movie should’ve mentioned?

Patrick Walczy is currently writing novels in North Carolina where he has worked very hard to earn the nickname, "Party Muffin." He's a stay-at-home dad to a daughter and spends 80% of his day as Prince Hans, which was tough until he learned that princes from the Southern Isles are permitted to get whiskey-drunk during the day and eat barbecue shirtless.