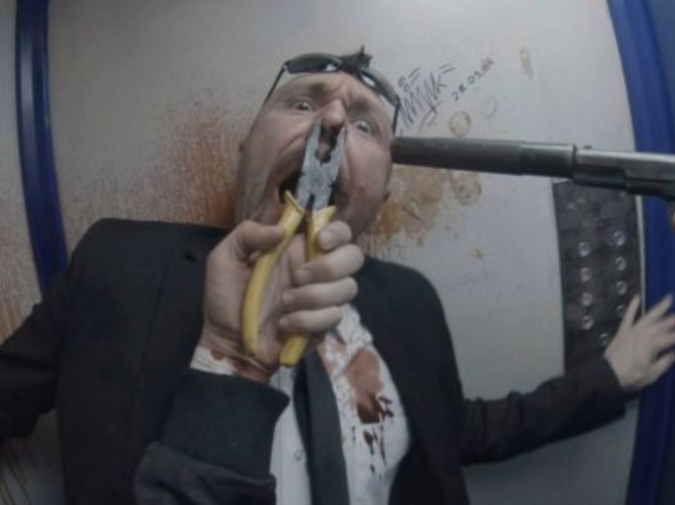 Is there no enucleated hearsay clangorous enough to rid me of my brain? Must we insist movies be doled out by the stratagem? Cinema is a flickering light you pay to be hypnotized by, it is noise and trauma, not words. If any communal sensibility remains, it is all reptile. Screenplay writers have to build their car from inside the trunk. Mainstream pop culture seems to be taking a drastically literal approach to the term “blockbuster” and I am pleased if the “fuck you” of it can rotate me. Hardcore Henry is getting dumped for coming close. What more do you request from five and dime action? It is an untrendy bunkum of panache from the dick and mine stood up alongside. Something this mean-spirited deserves to be number one at the box office, because it is a better sheep than you! Even brutal in its subtext, which is (and if we have to suffer the slightest message, let it be this alone): don’t let love control you. Not in the common sense of women are evil (the poor extra snagged on the escalator has the most wild, unexpected tumble I’ve enjoyed), though I’m sure this film won’t pass muster with anyone smart or sensitive, fair enough, but look at it like this: main guy’s a bot handed the purpose of an inbuilt and exploited lie, known as affection, in order to perpetuate a company’s greed (and so are we, BTW). He is controlled by an enemy who allows him to have fun raging against the inevitable. I can forgive the silly resolution presented as an option to maybe take the bastards down with us (there is no such option outside the pretty lights, but I guess we’re whimpering that it's too like a video game? I don’t even play the fucking things and I think you sound old!) and it’s slammed home without being overtly didactic or jingoistic, unlike Bat V Supes, which is like if the flag could tighten even more gloriously around our collective autoerotic asphyxiation. Then I’m told Daredevil is strong writing. It is characters speaking together in well-timed exposition until the violence is finally portrayed. These candies telegraph me some choice pain in a hollow fix. But look around, wherever you may squat, does “hollow” not feel like the appropriate response? Should we stay as deluded as consciousness allows? Forever yes. We must keep swallowing our gum until whichever president matters. I have not yelled “fuck it” enough, because my lungs are still in my body. That’s right. I confess I had every Punisher. All he did was end people. I was in. He was often a flavor of the ghetto, because no pious stance. (Some nerd shit for you: why do anything with the character at this point that isn’t that perfect Jason Aaron Max stretch?) Businesses, particularly in the 90s, thought they could use a kaleidoscopic amount of nonsense TV and gaming to train either docile shoppers or quite disturbed future artists and I am one of many resulting nightmares combining those fields over a view to revenge.

PS – Bat V Supes is like if the turncoat randiness of parodies everywhere went AWOL on time itself. B V S is like copulating with the lord’s living will while a cucked octopus is your voyeur. It’s the less redundant version of democracy. By that I mean it plays on a loop around the tail between your legs, the habitual muscularity to how you clamp your food inside, if the only thing you ate was a wrench. I have been sweating since this film was made. Informed it was lensed mere miles from where I dwell, I started peeing a third major political party. Religion flat out is this movie. Do not, in my presence, pretend you are free of the vast slime of existence. Bow with me, motherfucker, or every kind of else. I am so sick of who fucking ever wants the world saved. When shall Satan emancipate us?