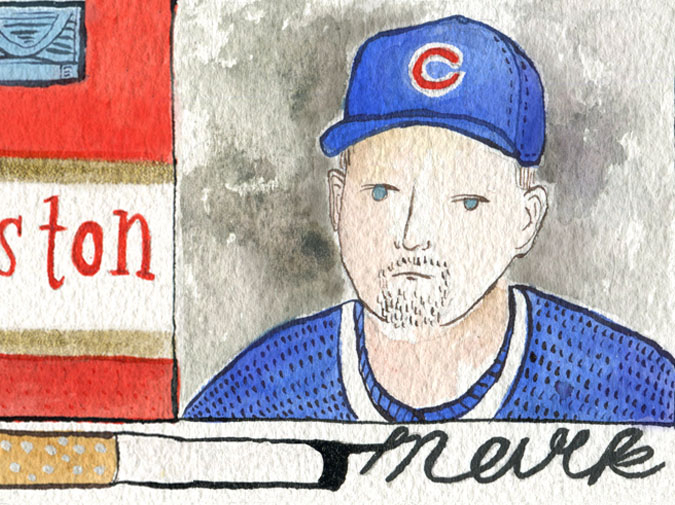 Murphy's was packed beyond any regard to occupancy regulations, and this made Evan both grateful and concerned. With so many people around him, it was physically impossible to stumble or fall down. But this made it hard to spot his man. He tried to scan the patrons and keep an eye on the entrance as well. Yes, there would be other chances. But the magic of the afternoon had morphed into an all-encompassing delerium. All Evan wanted was to meet him. He didn't know what he would say or do, but at the very least, good eye contact and a firm handshake would suffice. Definitely the handshake.

Earlier in the afternoon, Evan shook another Winston out of his pack, unable to take his eyes off the television. A magazine article mentioned Mark Grace's penchant for the brand, and Evan made the switch despite the noxious smoke that tasted like an industrial smokestack in Gary, Indiana.  The crowds inside and outside Wrigley with almost equal numbers cheered and yelled, but he was transfixed for different reasons. It was the bottom of the ninth. Grace was in the batter's box, glaring, looking so damn All-American with that crew cut and eye black, gripping his bat, taking a few practice swings as Eric Plunk got into his windup. Evan opened an Old Style with its quiet “pssst,” like the can was going to let him in on a secret. The crowds were frantic after hours in the Indian summer heat, the home run record, the back-and-forth between the Cubs and the Brewers. They all wanted to see Sammy Sosa. Evan had Grace all to himself.

Megan's keys jingled outside the door, and he sat up straight in his armchair. She walked in and made her choreographed Sunday movements, dropping her bag on the side table and taking a left turn into the kitchen. Evan heard ice cubes tinkling into the glass. She came into the living room and eased onto the loveseat, sipping her Jameson.

“I, just, how many times do I have to tell Mike to make sure my register is ready--”

“Fuck.” Evan grumbled as Grace swung and made good contact, but hit a harmless ground ball  to second base.

“--before I clock in. I mean, it wasn't that busy. Everyone's watching this game, but still.”

Sosa was up and everyone went apeshit. In the fifth inning, he hit his sixty-first home run of the season, a two-run shot out onto Waveland. Of course nobody would remember the two-run part. Grace had singled to right field before Sosa batted. The announcers kept going on about Sosa's RBI total. Hell, if Grace hit in front of him more often---

“Sorry, I guess you're busy.” She took another long sip.

“Well, you should talk to him about it.”

“I have. Many, many times. How many times have I complained to you about it?”

“Well, Christ I can't do anything about it.”

Sosa ran around the bases and into the dugout. The fans screamed and threw bottles and wrappers into the outfield, that American form of celebration. Play-by-play announcer Chip Caray went off on some ramble about history and emotions, momentarily distracted from his non-stop blathering about the day's Beanie Baby giveaway, while Sosa took two curtain calls and waved.

“He did it!” Megan clapped. She was the most casual of casual baseball fans, but everyone in the city was at least aware of the history being made.

Evan rolled his eyes. “Yeah, they just like the spectacle and home runs. They don't care about--”

Megan finished his sentence. “--the ins and outs of the game. The way Grace plays.” She stared at him for several seconds. He waited. Nothing. She turned back to the television.

He always touted Grace's undderrated prowess to anyone who would listen. Grace just looked like a ballplayer. There was his glare, but then his warm smiles. The tanned, blonde-haired forearms and no batting gloves. Evan wanted to shake and inspect the hands. They were probably sandpapery and callused. Working man hands, those hands of Grace. In the bottom of the third, he had slid hard into second base for a double and got his helmet knocked off. That was true effort, more than Sosa running into the outfield and doing his nonsensical heart and mouth tap.

The Cubs tied the game on Gary Gaetti's single up the middle. There was a chance Sosa would get another at-bat, a chance to surpass Mark McGwire. Evan finished his beer and opened another. In the top of the tenth inning, Greg Martinez hit a grounder to first. Grace grabbed it, lunged, and applied the out tag at the last second. Evan gasped. “Oh god.”

Megan finished her drink in silence.

In the bottom of the tenth, Lance Johnson grounded out to second. Jose Hernandez lined out to right field. Grace was up again, but of course nobody cared. Sosa was on deck. Al Reyes went into his windup.

Megan turned. “After the game, I was thinking--”

“You son of a bitch! You did it!” Evan staggered as he got up, toasting the television. “See? What have I told you? He's the best. Nobody gives two fucking shits about Grace. Now look. Look at him!”

Megan stood up. “As I was going to say, after the game I was thinking you could head down to the ballpark and suck him off.” She walked into the bedroom and slammed the door.

Evan left the apartment, managed to hail a cab, and got out in a tangled mesh of sweaty, sunburned fans. It took twice as long to get into the bar. He somehow got in past the bouncer, who was overwhelmed and outnumbered. Evan squeezed in, screamed “Old Style” over the din, and kept watch. Every handsome blonde crew cut was a false alarm. But he waited for Grace. And waited. Even if he never showed up, Evan would meet him in the future. It had to happen. He'd  walk over confidently, slap Grace on the back, insist on buying him a drink, and tell the man how he kept vigil. How he wanted him to show up at Murphy's, but knew he was probably getting mobbed and beer-showered in the clubhouse. As late afternoon turned into early evening, he found an empty stool and ordered another Old Style. He turned to face the entrance and waited some more.

James Yates is a Fiction Editor for Longform.org, works as a bookseller, and runs the literature blogChicago Ex-Patriate. This is his first fiction publication, and his non-fiction has appeared in The Chicago Reader and Treblezine. He lives in Chicago and will be starting an MFA candidacy in Creative Writing at Roosevelt University this fall.

An in denial Philadelphia Phillies fan living in New York, Katie Gross (illustration) is an avid baseball watcher, peanut cracker and fantasy baseball player. When she isn't secretly listening to baseball games at work, she can be caught drawing and illustrating her favorite baseball cards.