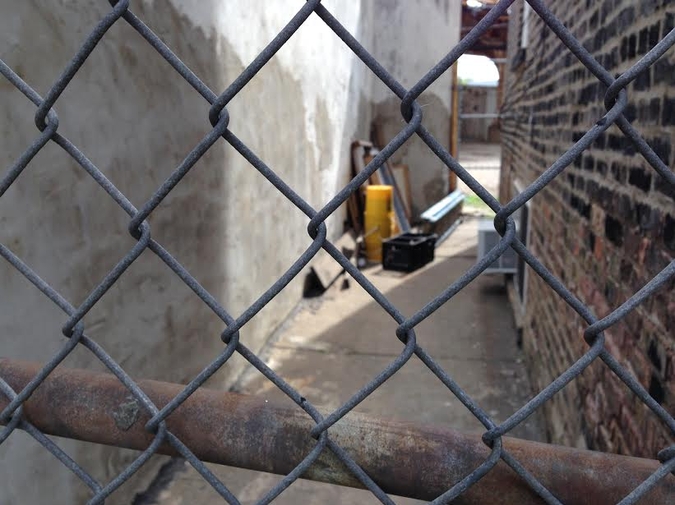 The tourists stand on the hostel balcony, shirtless, sun on their golden skin and hair or maybe their skin is the sun. More are coming, walking down the street laughing singing in other languages holding bottles of beer just purchased from the kiosk, coated in beach salt and sand, going to their rooms to change before they go back out again.

The hostel is behind a bus stop on ha-Kovshim street in Tel Aviv, where I am waiting for the bus to go home, to my parents' house. I am returning from the beach. It is a Friday and I have a day off. I have five shekels in my hand to pay the fare. I am a soldier and soldiers ride for free, but you have to wear your uniform, and who would do that, on a Friday.

The sidewalk where I am standing is separated from the hostel grounds by an aluminum fence topped with barbed wire, the type that gets set up temporarily to protect construction sites, but there is no construction. Over the years the fence has begun to sag so the wire touches sidewalk; I am not paying attention and it scratches my hand.

The street name, ha-Kovshim, means "the conquerors", a name that commemorates the members of the Irgun who conquered the Manshiyya neighborhood in Jaffa in 1948, leveling it, erasing all life there. A name that was selected when this was something we were proud of. The ruins pushed into the sea, a park built on top of them.

I am terrified of buses, of all closed public spaces, but you cannot just stop living, so I continue to ride buses. If someone gets on the bus with a coat too big or bags too heavy or leaves his bag on a seat and walks away, you just duck below the seat or head for the door to escape the explosion; but don't say anything because it's probably nothing and you'll just embarrass yourself.

The hostels in Tel Aviv are shutting down. I once read a magazine article that explained why this is happening: Tourists who travel the world like to find jobs in the cities they visit, stay there a while and earn money for room and board. But In Tel Aviv, the magazine says, the cost of living is so high the tourists can't earn enough to keep themselves in Heinekens, or Goldstars, rather. So they go elsewhere.

But I know that is not the real reason. The tourists are leaving because the light is being sucked away from this city. The light that, right now, still shines down from them onto me, touching my bare shoulders like a secret: Yes, it exists, this youth, this beauty, but not for you.

Karen Marron lives and writes in Tel Aviv. She has an MA in Creative Writing from Bar-Ilan University and edits creative nonfiction for The Ilanot Review. Her work has appeared or is forthcoming in Drunken Boat, Word Riot, Blunderbuss, and Beeswax Magazine. Follow her on Twitter @marronglacee.