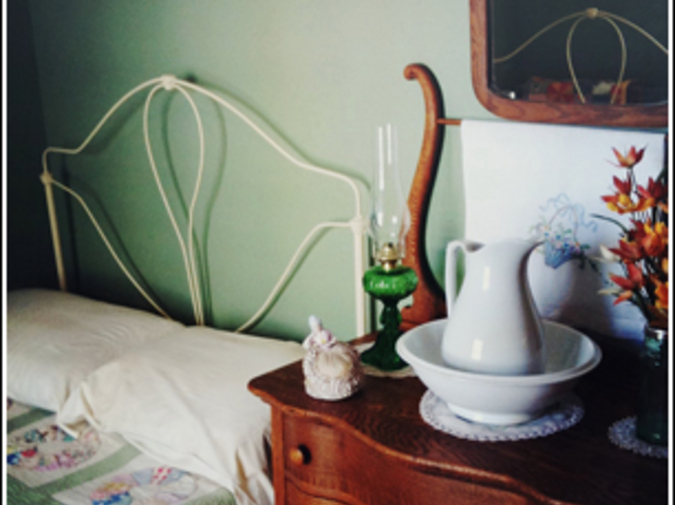 I know a lot about the way a body grows in bed. I know a lot about sleep, which takes place inside the bed. I know about the dreams that swim around and the sweat that slips out. I like to watch this while it’s happening, but I never break into a house to see it; I break into rooms. I break into the rooms of my house, but this is my house anyway. I’m the oldest of seven. We all share two bedrooms and I get one with my Grandma who goes to sleep before me.

I know a lot about Grandma. For example, there is a powder brush on her dresser that she uses every night as if she is preparing for a great banquet, even though she goes right to bed. Before getting into bed she pats down the front of her T-shirt to check for food stains. Doesn’t she think I would tell her if she had sauce on her shirt? Or maybe she does this to see if her boobs are shrinking. I’m not sure if this what old women want or not, to be shrinking. When she’s asleep I come in with a flashlight to find my pajamas and toothbrush and to take the extra pillow on her bed that she always forgets to give back to me. I’ve gotten very good at being quiet.

I stopped growing when I was eleven, but it’s not like I was at a good height. Grandma tells me that I’m right where I should be, but it just doesn’t make sense to be shorter than my twin sisters who are only fourteen, and my quadruplet brothers who are ten. Luckily I’m taller than Grandma at least, who has extremely bad posture and walks around in socks. I used to wonder about my sisters and how they got to be so tall; so one night when I was thirteen I walked into their room and peeked under the covers of their double bed to see where their feet reached. Georgia, one of my sisters, has smelly feet. If I told her that she would probably pinch me. If I told her when she was eleven she would really pinch me, because she was still really nasty to everyone because she hadn’t grown boobs yet. Georgia has only had boobs for a year now.

I take measurements every night after they’ve all gone to bed. I write down what position each person is sleeping in. My sister Georgia sleeps like a dead mouse curled up in a wastebasket, which I guess is what some people call “the fetal position” but her version of it is strange.

Her twin sister Liz sleeps in an almost-fetal position, except her arms don’t tuck in at her chest but clap over the pillow as if she’s making a nose dive into a pool.

Grandma is the one that worries me. My numbers for my brothers and sisters show that their growth is gradual yet present. And what about Grandma? Her shirts always look too big and her nightgown spills out around her feet like a puddle. I have to hold her hand going down the stairs so she won’t slip. I used to be afraid to take measurements of her, but one day I just did it. I was fifteen. I gently lifted the covers and marked where her feet ended. Night by night I did this, gathering courage from her snores and the fact that I could just leap into my bed across the room if she woke up. But she didn’t, and here is what I found:

She is getting smaller. Not every night, not even “gradually” like her grandchildren, but eventually. Over the past two and a half years her height has been decreasing and her back has become soft and doughy. When I give her back rubs I feel as if I’m rolling play dough under my palms, and when she reaches up from her bed to say ‘good night’ I find myself hugging more of the pillow than her. I can’t find a sturdy part of her to hold. At night, the only way that I know she’s still under the sheets is because she’s begun to hum in her sleep. I look over from my bed, half-dreaming, and believe the sheets are rustling like wind chimes. But it’s only her. What secrets does her body know? If I knew I could find out why this is happening, why lately she’s been sleeping propped up against pillows, letting her dreams digest so her body can slip out.