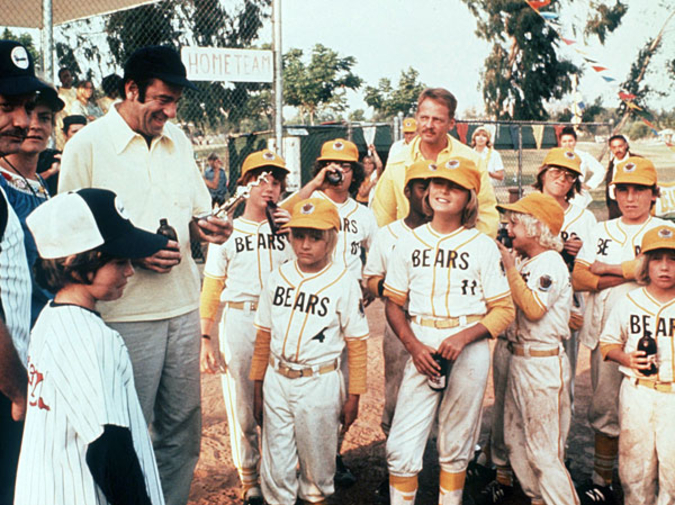 Walter Matthau, we assume, has had a bad day. Or a bad night. Or both. Hell, back it up as far as you want to go:  Week. Year. Fucking life. Drinking a beer in a Pizza Hut a few minutes into the movie, complaining about having to order uniforms for the team, Matthau says “I have a lot of pools to clean, I don’t have time for this.” Throughout the first act of the movie, he’s always asking after his check, making sure his check is signed, wondering when he’ll get his next check. How much could they possibly be paying him? The fact that for this man, coaching a little league baseball team is not a hobby or a passion project, but a chance for a financial windfall, tells you everything you need to know about where his life has gone. He used to be a baseball prodigy, a bright prospect in the minor leagues, but he never made it to the majors. By the time we meet him, he’s cleaning pools for beer money.

Which brings us to the opening scene of 1976’s The Bad News Bears. It’s a sunny day in southern California, the mountains rising in the background, hazy from either the distance, the smog, the sublime graininess so common in films of the 1970s, or all of the above. Here in the valley, men in tracksuits are doing calisthenics while the sprinkler system refreshes the field. A coach with a moustache is yelling baseball words at boys doing drills in the field, telling them to hustle, choke up on the bat, keep their eyes on the ball. The field is all lit up in the gold of the late afternoon, something you appreciate from having watched so many movies. (Is there anything worse than the protagonist rubbing her eyes groggily, asking “What time is it?” incredulously while the 1:00 pm sun blazes in the window like a searchlight? Or the hero saying, “We better hurry if we want to be there by nightfall,” while the size of his shadow and the quality of the light make it clear this was filmed just after lunch?)

Matthau—his character, that is, Morris Buttermaker—pulls up to the baseball field in a rickety old Cadillac convertible the color of an over-boiled egg yolk. He reaches across his seat to a cooler he keeps in the back, and he pulls out a can of Budweiser. (Is it possible the cans were bigger then? It doesn’t have tapered ends like a modern day beer can—it’s short and squat, and you can see a big seam down the side as if it were welded by hand or closed up with rivets). He pops it open, holds the can out over the parking lot and pours a little onto the ground. He takes a bottle of whiskey out of the glove compartment and uses it to fill the empty space in the beer, spilling most of the whiskey in the process, his hands shaking with a mix of expectation and delirium tremens. Holding the can in place, moving his face forward to meet it, he takes a sip.

Matthau’s performance here is brilliant, because he perfectly captures the hunger, the thirst, the need, the all-out-lust for another drink that possesses the face of a real alcoholic. Every crease in that weathered face of his, every fold of his leathery skin tenses in anticipation, and then is released. The look on his face after he takes the sip is not pleasure, so much. Obviously, Morris Buttermaker is the kind of man who has had enough drinks that he takes no real pleasure in it. The look, instead, is a look that says, “That was a close one,” like he’s just made it through the desert on his last gallon of gas, or plunged the much-needed shot of insulin into his stomach just in time. He needs the beer. It’s as simple as that. He takes the can with him, has it in hand almost constantly as he cheers the Bears on, or swears at them for fucking up, or shows the occasional glimpse of ungrizzled sentiment. It’s an interesting moment, the whiskey in the can, betraying as it does a sort of misguided concern with appearances. “I can’t walk around drinking from this fifth of gas station rye,” Buttermaker thinks, “but if I carry around this oil drum full of Budweiser, I’m a regular Santy Claus.”

It’s not an unusual hero to have in our movies. The lovable loser. The washed up drunk who chose the bottle when the weight of the world became too much. We’ve seen the story before. Morris Buttermaker, as the tottering father figure, is certainly familiar to me. I don’t have many memories of my father—or maybe it’s more appropriate to say that the memories don’t have much variety. The curtains closed against the heat, raiding the fridge, those empty bottles of Budweiser piled beside the sink. But that wasn’t all. He taught me things, too. How to bait a hook. How to position your hands on a ball when shooting a basket. A third thing, and a fourth, and fifth, certainly. They’ll come to me, I’m sure. It wouldn’t be fair to say that my father was a drunk. Did he drink? Absolutely. But I don’t remember many men who didn’t in Lansing, where I spent my first 6 years and first 16 summers. Unemployed or underemployed, manual laborers or service workers, how in the hell could you possibly begrudge them as many beers as they needed working thankless jobs like that?

But the question I always find myself asking is at what point the difficulty of one’s circumstances becomes grounds for forgiveness. At what point is an explanation just an excuse? The overwhelming memory I have of my father is absence. Coming up for the summer, staying with my grandmother for two weeks before he showed up to visit. Staying at his place, him coming home from work and falling asleep on the couch. “I’m tired.” “Leave me be, I’m tired.” Always so tired. His whole life spent just sleeping on a black leather couch, a Spuds McKenzie banner hanging on the wall, a beer sweating on the coffee table. He worked hard, yes. But who doesn’t? Is every person who has ever had a job a shitty father? Is life being complicated a reason to just throw up your hands and be terrible at it?

It doesn’t take long for Morris Buttermaker to remember his conscience, to feel downright awful for what he’s done (rather, what he hasn’t done) for the Bears. Standing in the dugout, a pile of uniforms in his hand, begging the kids not to quit the team, he yells, “I’m an asshole. Go ahead and yell. Get it off your chests. I deserve it.” Speaking with Tatum O’Neill on the side of the road, trying to convince her to join up—she’s the daughter of an old girlfriend—he takes his lumps. “Yeah,” she tells him, “but when you weren’t saving lives you were sitting around the apartment drunk. You made my mother sick.” Buttermaker is able to channel his abject failure into inspiration, is able to show these misfits, asthmatics, and losers (and, in an admittedly disturbing equivalence, racial minorities) that coming from behind is no reason to give up. It’s the classic snobs vs. slobs storyline, and the defining moment comes at the film’s turning point, when Buttermaker stands in the state senate, his plaid shirt collar hopelessly rumpled above his non-matching tie, and stares down at a check offered to him by the immaculate politician who is trying to buy him off, convince him to disband the team. To our surprise, to our relief, he doesn’t.

“This quitting thing, it’s a hard habit to break once you start,” Buttermaker tells the Bears, and it’s such a cliché that it would be easy to scoff at, if not for all that lies underneath it; for the image of Walter Matthau, lips flapping in grotesque anticipation for a sip of cheap whiskey floating on top of a lukewarm pool of foam; for the image of this man, older than your father, whinging and begging for his measly seventeen dollar check; for the image of this pool cleaner begging a little girl to help him; for the image of my father, falling asleep mid-Budweiser, telling me to put down my book, turn off the light, go outside, and play.

The Bears don’t win, because that’s what the world is like, but they have a consolation prize. Buttermaker throws open his cooler, glass bottles of beer floating inside, and tosses them out to the players, who are (maybe) 12. (Interestingly, the brand of beer is impossible to make out in this scene—not Budweiser, and not any other recognizable label. The product placement people at Anheuser-Busch were apparently okay with Matthau pouring whiskey into one of their cans and sucking at it like a plaid leach, but the kids getting their hands on the beer was too much). They’ve worked hard. They deserve a reward. And I’m no prude, I’m not the state senator with the gleaming face stopping his kid from having a drink. It’s a joyous moment, these kids trying on the real uniform of adulthood:  not triumph, not trophies reaching skyward, but disappointment, doing your best and losing, and beer. But there is that part of me that thinks of my father, of my six-pack inheritance, my beer belly rounded like his always was when I would watch it rising and falling in the dim light of the living room while he slept away the day. And I wonder about the Bears, about what Buttermaker taught them, whether they’re better or worse off than he was, wherever they are now. Who are they swearing at? What jobs are they working? What are they drinking? What are they coming home to? How do the wins and losses stack up?