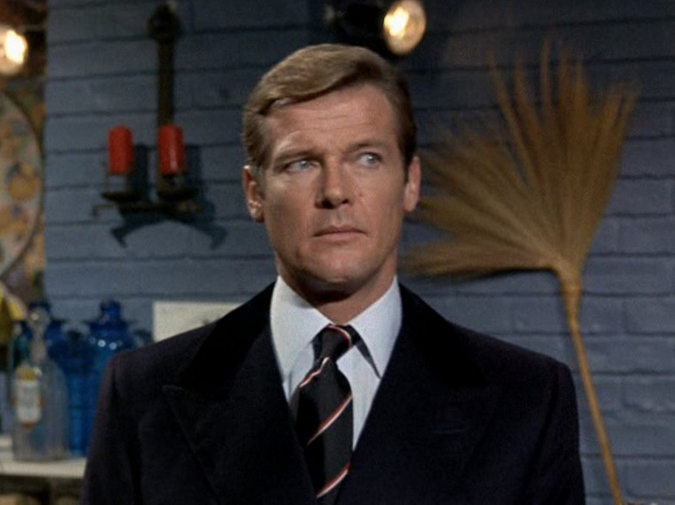 All Roger Moore wants is a drink. He’s had a rough couple of days. He’s Bond—James Bond—but nobody seems to believe him. He’s not in the mood for a martini, doesn’t care to micromanage the ingredients and the method of preparation. He doesn’t have time for any of that. He just wants something simple. Bourbon and water, no ice. He’s spent much of the action of Live and Let Die trying to order one, only to be thwarted time and again. The first time, he orders it in a Harlem bar—“No ice? That’s extra, man,” the server tells him, just before a false panel in the wall turns, delivering Moore into the villain’s secret lair. He does what always serves him best in these circumstances: he drops his name. But it’s the strangest thing. No one seems to care. Solitaire, the mysterious fortune teller working for the criminal mastermind, Mr. Big, tells Bond that she has been expecting him. She already knows why he’s there and what he intends to do. She’s seen it all before.

There must be some mistake. He says as much. “There must be some mistake.” This is the trick that has always worked. He says his name, and it transfixes everyone around him like a kind of spell. He says his name and they begin to wax nostalgic about the first time they saw Dr. No. He says his name and they remember when their fathers took them to the theater, bought them Goobers and cheered like little kids as the man on the screen sent a bullet down the barrel of the camera. All he ever had to do was say his name, and women would look him up and down, grab him by the shawl lapels of his double-vented tuxedo and whisk him away to a penthouse suite. And villains? Forget it—all he had to do was say his name and they would order his favorite drink for him, for Christ’s sake. They would try to kill him, sure, but they’d do it with respect. But now, everything is different. “Names are for tombstones” the henchman says when Bond tries to charm him in typical Bond-James-Bond fashion. Even the method of execution—thwarted at the last minute, of course—is unceremonious. They lead him into a back alley, stick a gun in his back, and attempt to shoot him dead beside a pile of yesterday’s garbage.

The second time Roger Moore tries to order a bourbon and water, his old friend and CIA contact Felix Leiter thinks better of it. They’re in New Orleans, and Felix wants him to get into the spirit of things. “Two Sazeracs,” he tells the server. Once again Moore is unable to get what he wants. He’s captured by the villain this time, as well. A trap door in the dance floor—bush league stuff, really. Does he defeat the villain in the end? It’s not so much a question of that. Of course he wins. The formula sees to that. But it’s a pyrrhic victory at best. It doesn’t feel right. Something is off. Roger Moore doesn’t feel comfortable holding the gun, taking the woman’s virginity, ordering his drink. Sean Connery, for all his faults, was comfortable in the role. Moore, at least in this first movie, isn’t quite right. He clashes with the scenery. He’s the sip of orange juice you take immediately after brushing your teeth.

It’s the summer of my Freshman year of college. I’m 19 years old. Like James Bond, I have a drink, and I order it with every bit as much affectation as Sean Connery at his scene-chewingest. Vodka, straight, room temperature. Three fingers, poured into a coffee mug. This drink has several advantages for an insecure young man such as myself. A great party drink—you could feel hardcore when people asked you what you were drinking. People would mistake your naiveté  for experience. Anything to make sure they didn’t see who you actually were, how terrified you were, how little you really knew yourself. This is what a drink, in many respects, is good for; it’s a quick shortcut to a personality. I’d spent most of my adolescence desperately flailing for one, disenchanted enough to know I wanted to rebel, but unable to give that urge a coherent expression. The prefabricated rebellious postures available to me didn’t quite fit—Punk, Goth, Emo—so I mixed my own acrid cocktail of Beat poetry, Ska music, cheap hair dye, questionable wardrobe choices, and insufferable behavior. It’s what you do when you’re young. Try on personalities for size.

I wasn’t alone. I had found the right group of friends to hide in. New people who didn’t know me well enough to see through the identity I was trying to project. The basis of our entire social circle—the foundation of our relationships—was, inevitably, drinking. It occupied our every conscious thought. Whether we could get alcohol, how much we’d have to spend, who could scrape together a few dollars, where we might be able to find some, who might have a hook up or a fake ID or some wine they stole from a catering gig or parents in the suburbs with an unlocked liquor cabinet.

Most nights we’d gather at someone’s apartment—invariably a filthy little box with a second-hand sofa and a Fight Club poster tacked on the wall—drink whatever we’d managed to scrounge up, fill a tin flask with the rest and drive drunk to an all ages dance club. If it wasn’t that, we’d end up at some party of a friend of a friend’s, drain the plastic bottles of whatever industrial grade vodka or gin was left while complaining about how the people there were assholes. Or we’d never make it out of the apartment, play poker or try to get TBS on the rabbit ears and keep drinking until we ran out, mixing with 10 for $10 cranberry cocktail and falling asleep on the couch or the floor, wet with the vodka-infused perspiration of an endless Atlanta summer. Often, I’d end up walking home alone in the middle of the night, stumbling around drunk and peeing on the sidewalk like I was cosplaying Charles Bukowski.

It’s not particularly hard for me to think back on this time, or to relive it. A little embarrassing, but what do you expect from a 19 or 20 year old? What’s difficult is thinking about how many years of my life I spent looking back on those drunken, oblivious times as if they were the glory days. Once I graduated college, my friends began to drift off in separate directions, as they do. I settled down to my first terrible office job, started going to bed before twelve. It didn’t take long for me to feel trapped. I felt incredibly lonely. I felt like I’d lost out on something, like my best times were forever behind me. It was easy to look back and mistake the feeling of not knowing who I was for freedom. It took me longer than it should have to figure out that I like myself more now, no matter how boring and adult I might seem to that younger self. It took me even longer to begin to understand who I really am. And only just now am I beginning to appreciate how hard it is, how much work it actually takes just to be yourself.

It’s 1973, and the producers of the James Bond films are worried. They are more than aware of the considerable risks of moving forward with the series without their star, without Sean Connery. They tried it once before, and it ended in disaster. In 1969, they hired an Australian model with no acting experience, George Lazenby, to take the role of bond in On Her Majesty’s Secret Service. In retrospect, Lazenby did okay, buoyed up by one of the better scripts in the franchise. But at the time, the change was reviled. Lazenby was considered a disaster. He had the look, but his acting left much to be desired. They ended up bringing Connery back for one more film just to repair the damage to the franchise (they paid him $1 million in 1971 dollars). They weren’t eager to repeat such an expensive mistake. They wanted to protect Roger Moore from being compared unfavorably to his predecessor. They knew, wisely, that he had potential to redefine the role. But the transition would be tricky. They’d have to win people over on the idea that this man—this genteel, soft-spoken, blonde-headed, cigar-smoking bourbon drinker—could be Bond-James-Bond. They decided that Moore would say as few of Bond’s (i.e., Connery’s) iconic lines as possible. If he doesn’t order a martini, the thinking went, people couldn’t complain about how he did it worse than Connery.

It all sounds funny in retrospect, writing from an era in which we pick a new Spider-Man more often than we pick a new President. They truly didn’t know if they could sell people on the idea that Roger Moore and Sean Connery were the same man. But James Bond, they would soon learn, is an irreducible constant. He expands to fill his container—like gas, like the Holy Trinity, like the ice in which he insists on shaking those terrible martinis of his. In Live and Let Die, Moore is still getting his sea legs. By the end of his twelve year tenure as Bond, he will completely reinvent the role, audaciously moving the goalposts from savagery to camp, from cynicism to frivolity. A UNICEF ambassador and a pacifist, Moore was always uncomfortable with the violence of the Bond films. By the time the ‘80s roll around, his Bond would be begging his sidekick not to kill the bad guys and dispatching with villains by gently sliding them across ice hockey rinks.

George Lazenby, who publicly admits that he quit the role because it was 1970 and he wanted to grow his hair out, at least has the decency to be reviled. Moore is not so much reviled as Bond as he is dismissed with a roll of the eyes and a condescending chuckle. He is taken lightly precisely because he took the role lightly. It’s clear by now that we like our Bonds the way we like our Batmen and our Transformers and our Star Treks. Darker. Grittier. Edgier. We want them, in other words, to take themselves seriously. To stop messing around with puns and get down to business—to the killing, the fucking, the drinking. But Roger Moore doesn’t work that way. He wears paisley ties. He winks at the camera. Personally, I think he’s underrated. I don’t think he gets the credit he deserves for the impossible task of following Sean Connery, for the way that he doesn’t pull it off so much as ignore the assignment completely. For all the grief that Moore gets, this much is true: we wouldn’t have the Bond we have today without those awkward middle years. Everything since (for better or worse) has been a course correction for this dopey blonde man struggling to fit himself into a role that wasn’t quite his. Fumbling for his lines. Straightening his tie. Ordering the wrong drink.

Matt Sailor was born in Lansing, Michigan, and moved to Atlanta, Georgia as a child. Today, he lives in Portland, Oregon. He has an MFA from Georgia State University. He is an associate editor at NANO Fiction and the fiction editor of The Mondegreen. His fiction and essays have appeared in PANK, Paper Darts, Necessary Fiction, Bring the Noise: The Best Pop Culture Essays from Barrelhouse, and elsewhere. His website is mattsailor.com. His favorite drink is bourbon in a wide-bottomed glass.