Grand Army of the Republic Highway 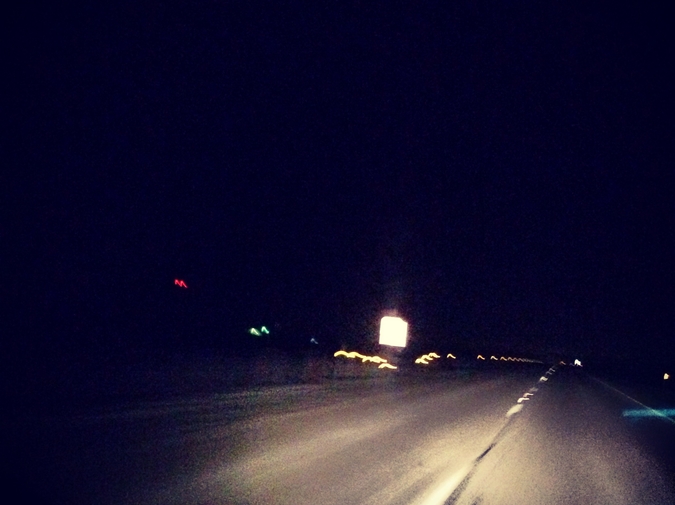 I am driving through the hill country when I spot up ahead, in the dip between two hills, this young buck with his thumb out, sleeveless, flaunting the white underside of a supple tanned bicep. He squints into the sun, upper lip pulled off his teeth, privately bemused.

I whoosh past. The sleeveless tee flags hard in the rearview. Privately bemuse that.

He looks over his shoulder at me. Mouths something.

God knows what he has just said about me. He might even have done the finger.

I imagine him doing the finger, then me locking up my brakes—letting him watch my car idle for a moment in the distance, not a soul for miles. Just highway, mountains, that eerie Vermont non-wind.  The car’s far enough he can’t hear the engine idling. Then, the white-pupil’d reverse lights . . .

But this would look wrong in my compact. I have seen a hundred teenagers do this in compacts and it’s comical—though usually scary, too, exactly because of the two-cylinder’s feral yowl, the thin skittering tires, the flimsy rattling shell. But I’m already a hundred and fifty yards on, and it would take the car forever to reverse that distance in screaming low gear. A U-turn would be more sensible. Also, whether forward or in reverse, the charge would have to terminate eventually, by which point the supple man-boy would have already sized me up, stepping over to the driver’s door to help me out.

Better if like that sniper I had a crawl-in shooting blind in my trunk: I could stop in the road, pull the parking break, and wiggle back there quick and poke my muzzle through the peephole behind the license plate and watch the boy’s obscene hand gesture vaporize from the top of his raised arm. I would then race back to the steering wheel, and no one—not even the boy—will have any idea whence the whistling hornet of retribution has come.

Or not vaporize, because we need the image of the boy swatting through the ditchweed to recover the hand, which he’ll hold in his crotch as he drives himself to the hospital, childishly hopeful that it can be reattached. The hand still maintains its blind obscenity, and the boy makes sure to unroll the fingers, holding the wheel with his knee as he pulls gently at the fingertips, so that the doctors will not see the crime that has caused this and refuse to help him out of justice.

“We call that street justice,” the doctor will say over his reluctantly lowered facemask, then spin and squeak down the corridor, a giant gold watch on his fine hairy arm.

What am I saying? Drive himself to the hospital? In what? No, he must run down the road, the unlaced Timberlands like luggage on his feet, his heart pounding double within his heart, the air thinning in his lungs—his stamina drained by the panic over his hand’s wilting ability to be reattached. Time is of the essence! But he does not even know what direction the hospital is in; he’s never paid attention. He prays for the sound of another car. He will forgo the imperious thumb and bicep show this time and instead plots a more humble gesture: leaning over hand-on-knee as the car approaches, obviously winded, then standing and softly waving with an unselfconscious sun-grimace on his face—the gory stump and hand rolled abashedly in his shirt: a stoic farmboy with puritanical troubles.

Which is what he was, maybe, before I sniped at him from my trunk blind. I have poisoned everything. Now he is confused, his face scattered by a slew of new understandings. I feel crummy now.

This is like the time I was made to play varsity lacrosse and felt it necessary to put the disasterously buck-toothed yet inexplicably imperious rich snot—who was two years younger but slightly farther than I from the edge of athletic incompetence—in his place by furtively drilling him in the nuts during a passing warm-up. A lacrosse ball is serious: he crumpled into ululation, then vomited, and it was only as the others rushed to help him (“Oh my god, he’s not wearing a cup!”) that I understood he was two years younger and that I’d brutally violated some kind of social trust—introduced a simply confused and struggling boy to a world of blind evil, thereby multiplying exponentially his confusion and struggle, and possibly the evil. That I’d done this on purpose occurred to no one except the crying boy, though perhaps not even to him. He remained thereafter, as before, unmoved by the sight of me. Lacrosse is for assholes.

I am now sad about the hitchhiker, already half a mile behind—sad about the thronging shock of bone-sheer, the thick, sour pinging feel where his hand used to be.  The justice is lost on him, so the retribution loses its value even for me. It fails as a corrective and becomes instead but a negative that yields further negatives. Even my effort now to advance the scenario, to finish the trial I have started, chokes on regret—that fine mischievous hand that cannot be reattached, the trigger that cannot be unpulled, the unretractable, mindless bullet. What is wrong with me? I am a reptile.

And then I’m more sad about myself than about the boy or his hand. I am suffering the trauma of loss—traumatic not because of the loss but because the loss can never be compensated. I get the twentieth century now. Loss can never be transformed into a gain. We always end with less. People will argue with this, but this life, this world, is defined more by loss than by gain—most of us are dead, each day whittled like the tip of a spear—and it is only mental gasses and new-age bromides that convince us otherwise. (When I told my wife of how, one night, right after the god-awful smell came through my vents, my headlights had brushed across the image of a skunk dragging a dead skunk off the highway, she said, “Well, that will be food for some other animal.”)  No injury is undone; thus all injuries must be forgotten if we are to stomach another day.

What I had not accounted for—not until just now—was the car parked just behind the boy. A beige Olds, a little broke-down maybe. His granny in there maybe, slurping the dregs of an oxygen tank. The boy had needed help. It was not the time for a teachable moment. He had just not known how to ask for it without flaunting his tan bicep.

A small rat has just run across the floor of this coffee shop. The young couple who own the coffee shop need to tone down their West Coast ideals here in the hill country. To report the rat will be a demoralizing blow.

But I have hazarded ten miles of non-cellular hill country for this cup of local-roast, which you might think would inspire them to tighten things up.

I have reported the rat.

It felt good to hit them with this, to see the earnest young couple’s latte-literate faces fall apart. But now my life feels crummy and more complicated. How many more poison darts must I fling at the world? How many misapplied correctives, inexplicable injuries?

How often have I waited for the rat with a sledgehammer—knowing, as a rat myself, exactly when and how he will come?

But it’s never this other rat that needs the correction. This other rat is usually getting along fine, or soon will if you stop staring so closely at it, give it time to work out its glitches or sanely inhabit them. In every case, actually, when left alone, the rat reveals within its infuriating lack of self-loathing a body of virtue that you yourself could never fathom, never possess—or it turns out they understand boat building or something—and how quickly he ascends to some station where you no longer matter, leaving you alone there in the hill country, patrolling, sniping at all of your demon shadows, while everyone else stumbles out into the open, squinting at the horizon, making their way mile by mile toward the kingdom.

Jacob White is the author of the story collection Being Dead In South Carolina. His prose has appeared, or soon will, in places like Shenandoah, Denver Quarterly, Salt Hill, and New Orleans Review. He teaches writing at Ithaca College in Ithaca, New York.