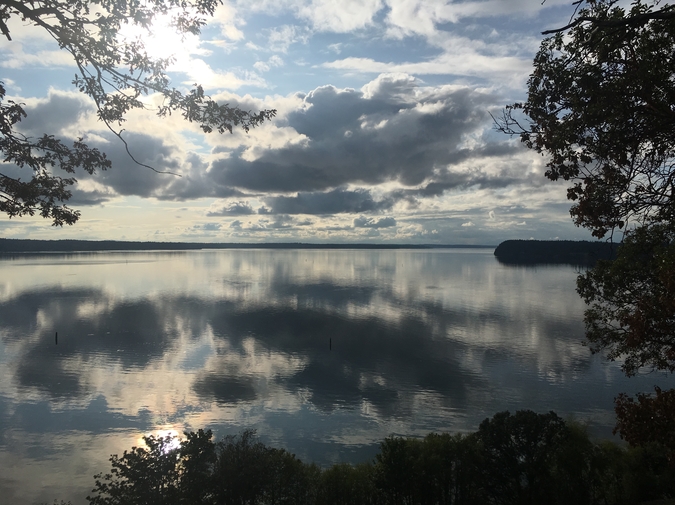 My mother once jumped off a boat into a swarm of jellyfish. Why did she think they would not sting? She said they felt like good company, squashing up against her with their jelly bodies.

The jellyfish swim close together, bodies squashing other bodies, squashing themselves. They swim up close, in tribes, along the Clyde. The Clyde is a mountain and it is a wide, wide river that is almost the sea.

My mother is almost the sea. But she’s sick, now, and it’s a secret. No one will tell me what’s wrong. Now, she is more like the lagoon at Mossy Point that becomes a creek down along the backs of the Mossy Point houses, that turns slowly into mud on either side, that no one goes near on account of the mosquitoes. The creek is very still. I am so curious about your life.

My mother doesn’t need any looking after. She isn’t the sort of sick that anyone can tell. No one knows except me. I don’t go near, on account of the mosquitoes.

Can I tell you how it was when my mother jumped into a river of jellyfish? They were soft and eager, like wet ghosts. They thronged around her like they had found a queen.

Where at the coast do you go?

The biggest difference in being sick is in the skin. There’s no way in, that way. It’s a strange feeling: your body a thickened skin you wear outside your inside one. Your body an object that is numb, that you carry. Your body turning jelly. My mother doesn’t speak now. She only sits and touches skin into skin. It feels like nothing.

I have only been stung by mosquitoes. Skin is meant to itch. My mother’s skin and mine. There is a whole world between one skin and the next. Inside my mother’s innermost skin, there is nothing. Outside, there is my mother. My mother is made of skin and nothing. How can that be sick? There is another skin, the skin on my coffee. There is another over the surface of the water. My skin is the hot thick air over the creek, the place the mosquitoes like. Is it near the Clyde, where you go? The river or the mountain? Or is it nearer to Mossy Point? Have you seen the swarms of jellyfish that come in from the sea? I wonder where they come from, out there. I wonder what it’s like to be a jellyfish swimming, a jellyfish swimming in a swarm of jellyfish swimming in the sea.

Eleanor is an Australian writer living in Minneapolis, where they're an MFA candidate at the University of Minnesota. Their work is published or forthcoming in DIAGRAM, New Orleans Review and Award Winning Australian Writing.