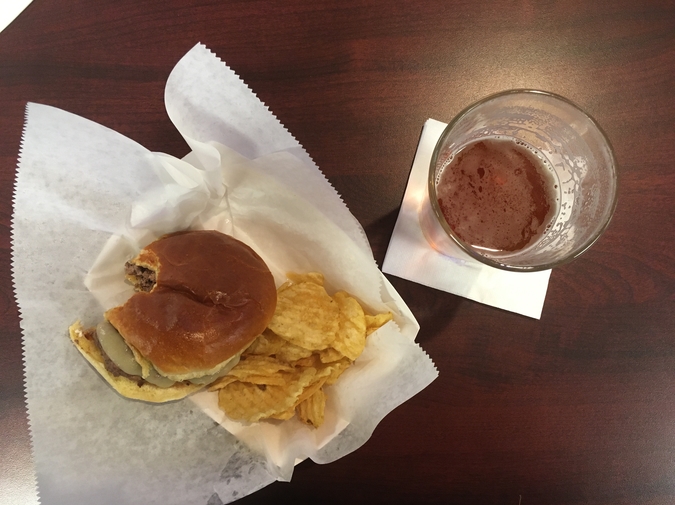 “Remember the first time you learned French fries come from potatoes?” I ask my friend Jase. We’re wasting time at the 7-Eleven, where we walked from his parents’ house, following the shoulder of a four-lanes-across road where SUVs rocket out of suburban Virginia into DC. We couldn't care less about the watermelon-lime Slurpees and Flamin’ Hot Cheetos we’re going to wolf, the Rolos and Reese’s minis for the way back, because it’s the walk we like—exhaust cramming our woozy nostrils, whirling tornados of dust and grit, gravel ping-pinging, the ground a glittery mosaic of broken glass, cups, wrappers, speckled with more mysterious items edging the treeline: one laceless Nike; fluorescent light tube; jean jacket sleeve; three stained, pink chair pads. The dead squirrels are deader here, and Jase brings a stick so he can roll them over, which I close my eyes for, which he calls girly, which since I’m a girl, why care? The walk makes us think we live in a real place, not this sanitized suburb. Next year maybe one of us will drive and no more walk.

We haven’t been yelled at yet, and we’re in our third aisle.

Jase keeps busy jerking Big Gulp lids out of the lid thingy, dealing them side-by-side across the counter, deck-of-cards style, so they end up looking like a field of flying saucers. He says, “What’s that? French fries come from potatoes?”

“Ha. Ha.” I shove out the words like two complete sentences, full pause between, like a real period sits there, because I try never to laugh for real around Jase. He doesn’t “condone” laughter. He’ll challenge even a snicker, his whole face shriveling to an icy sneer. “You think that’s funny, try being inside my head. That’s sure some funny.”

Now he says, “So on-topic, did you know hamburgers come from giraffes?”

"Hey!” the 7-Eleven guy shouts, no surprise, so we scoot over to straws. Part of me wants to collect up the leftover mess of scattered lids and tuck each back into the lid thingy or else dump them in the garbage, but also part of me wants to sweep them all with one fast hand onto the floor, to seize whatever Jase does and amp it worse. Like taking his flipped-over dead squirrel and stomping it. Barefoot. It’s like there’s a competition only I know about, which I’m losing, BTW.

He’s stabbing straws hard against the counter so the white paper rips off. The 7-Eleven guy’s busy explaining Powerball to some old lady with a fancy purse sagging off her arm. We’ve got time. All the time in the world, which is something my dad says at irrelevant moments, like when a waiter brings a check.

“You might’ve already,” Jase says. “Without knowing. You read every ingredient label? You know?”

It’s bad for the earth to waste so much plastic. To drive those SUVs. It’s tiring to think about that. We don’t have all the time in the world, I imagine informing my father. Not that he’d listen. He doesn’t much like me. It’s pretty clear.

“Barbecued giraffe ribs,” he says. “With zebra dipping sauce on the side, please.”

This is our thing, going hours this way, like nothing matters. People at school are afraid of Jase. “School shooter,” they hiss into megaphoned hands as he slinks by. He’s short and pudgy but walks like a cat. If I had other friends, they’d warn me away from him. If I had these other, imaginary friends, probably I wouldn’t need Jase, who scares me a little bit. Maybe part of me likes feeling afraid.

“Do you ever think about why we’re friends?” I say.

He stops with the straws, snapping his gaze straight at me, which he hardly ever does. His fullest attention. No one gets that. And here it is, steered onto me. He says, “Asking that is like getting on the down elevator when you want to go up.”

I’m nervous to break our eye-lock. His irises are “stippled” (my word from art class last year), blue and green and gold and grey, like the flecks decorating Easter egg malted milk balls, bulgy like them too. My eyes are only blue. I know he’s waiting for me to say ha-ha again, my familiar comeback. I repeat the question: “Ever think about why we’re friends?”

"I guess you do.” His hands abruptly go still. So weird because they’re always fiddling, ripping things, destroying. I striped that puke-green nail polish on both his pinkies yesterday. He wanted to do my toes but I said my mom would kill me for wrecking our stupid and stupidly expensive mother-daughter matching pedi she made us get. He mocked the color she chose for us; “diaper rash glow,” he crowed, “bedsore pink.”

“Easy,” he says. “I wanna fuck you.” His unwavering gaze strangles. My lungs claw for that next breath, like reminding me to remember their function. I clench and unclench and re-clench my hands as he goes: “Not now, but eventually. Sometime. Ideally, we’d be each other’s first. But I’m cool with any slight deviation in the plan, if that’s how it happens. As long as it happens.”

“Ha. Ha,” I say but screw up by laughing tensely. I decide he’s joking because he has to be.

He says, “It’s like potatoes and French fries. So obvious once someone tells you, right, so crystally clear.”

I’m only now back to normal breathing, resting my hands flat on the sticky countertop. The old lady’s swishing away with her strip of Powerball tickets, and the 7-Eleven guy’ll start yelling; we’ll pay for our Slurpees, which buys us ten more minutes, then Cheetos get us five more. Everything’s same as usual. (Not really.)

Jase says, “So now we’re at the point where the question is, why are you friends with me?”

It’s like time breaks for this pause in the action, where I should think over what he’s asking. His eyes trickle away from mine. His slouch shapes into a question mark. His question is like a question he’s scared of, that single thing he knew he’d never ask until he asked it. Jase is afraid. Of me. I think about the squirrel-turning stick outside behind the dumpster, where he hides it for the way back, how I never keep my eyes open when he pushes its tip under the matted, crusted fur.

In our silence, this surge pounds through my body, something like I’ve never felt.

I know. It’s what I feel when I’m with my angry father, meeting him Wednesday nights and every other Saturday, at a restaurant or play or craft fair, always sticking to public, boring, careful. I’m work for him. An obligation. Checking a box on a form. That perpetual item haunting his important-person to-do list. I’m direct deposit into a special bank account. I’m one-half of his D fucking N fucking A. Fuuuuuuck. Because also, mostly, maybe exclusively, I found out last year that what I am is the exact thing that obliterated his other life into iotas by me being born when he was married to someone who wasn’t my mother. That surge.

And look, Jase just handed it over to me, same as my dad did telling me all that. For the first time, here’s something I know I can win.

Leslie Pietrzyk is the author of the novel SILVER GIRL (Unnamed Press, 2018). Her collection of stories, THIS ANGEL ON MY CHEST, won the 2015 Drue Heinz Literature Prize and was published by University of Pittsburgh Press. (There's a story first published in Hobart in this collection!) Fiction/essays have been published in Ploughshares, Southern Review, The Sun, Arts & Letters, and more, and her short story "Stay There" received a 2020 Pushcart Prize.