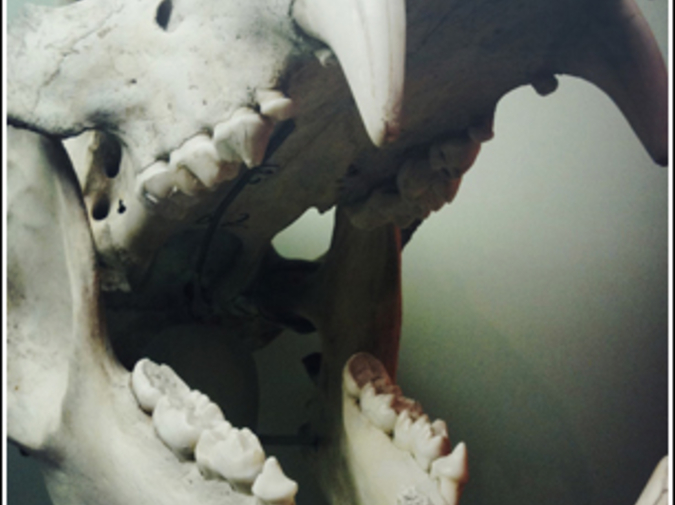 I am a fifty foot and two inch panda monster. It’s time for my sacrifice. If it’s not there, then it’s time to rampage through the village. I live out in the woods, a deep ancient forest, trees older than me. I can hear them talk to each other. They bore the hell out of me. I pound my way through the path, here before me. Where did I come from? Just fucked-up nature. I had a mother. So I must have had a father, but he was never around and never mentioned by my mother. She died, and I haven’t seen another giant panda monster since. But there have to be. Surely I’m not the last.

The town is a sweet little fishing village. I have a circuit between ten or so villages. I hope they don’t know about each other. Would they be jealous? Band against me? I come here for my virgin every month or so.

As I get closer, I walk heavy, really stomping the ground, give them a little scare, a show for their money. The trees shake, like an unholy wind. Drums from the village start up. It’s a nice beat. I do a dance step before I clear the ridge and come into view. Have to put on my monster face. The screaming starts low, but as I get closer it drowns out the drums. They have my sacrifice tied between the poles.

It’s lonely being a big monster. I’ve met smaller monsters, and they seem to travel in packs, keeping each other company. I met these two werewolves one time, and they were a real cute couple. I ate them. They gave me a terrible hairball.

When we big monsters get together, we usually get in a fight. I don’t know why that is. This one time a giant porcupine turned the corner of a mountain, and I was just sitting—I sit a lot—picking my teeth with a tree. So this porcupine takes one look and turns his back to me. I think to myself, just keep walking, you, I don’t want to have to get up. But then he shoots off a shitload of quills. I was picking those out of my fur for days. Which is nothing compared to that damn scorpion.

This one looks different, my sacrifice. Are they trying to cheat me? Are the white ones the same flavor? I pick her up. Instead of quietly accepting it for the tribe or screaming, she titters, like she’s communicating with me. She pats my paw. She’s rubbing the fur. Soothing the savage beast? Cute. I’m not that hungry. Pet, maybe?

I trot into the jungle. I talk to the girl, and she listens, eyes bugged out. Maybe my voice is at such a pitch that it’s rattling her small brain. I tell her I wasn’t always this big. I was once a red, slick peanut, crawling from my giant mother’s uterus to her pouch. Longest journey of my life. A test to see if I deserved to live. Now I deserve to rest. The pouch, now that was good living.

The girl paces my palm, and when I pay attention, she mimes eating and pats her stomach. I root through my fur until I corner a group of lice. I catch and crush one but lightly so it twitches still as I set it in my palm next to her. She mimes vomiting. Do they throw up on their food like flies? Finally she lifts the louse, the size of her hand, and takes a bite.

A pain shoots up my leg, and I see the scorpion. It is a giant scorpion, but, of course, not as big as me, as big as a scorpion would be to a normal-sized panda, which only makes sense. Sometimes it’s a pain to be so big and slow moving as the scorpion dodges my attempts to stomp him. It crawls away to hide and bother me another day.

I realize I’ve had the girl seized in my palm the whole time and open it to see her shaking but fine. I go on telling her my life story. She is a good listener.

As time passes, the girl adapts. I make her a little spear, and she hunts the lice on her own. She leaps through my fur like a deer. I like the way it feels. At night she curls up in the fur around my ear and whispers in her strange language. I think we are in love.

I show her the island and its beauty. The ancient forest gossips on and on about her. I put her in a pterodactyl nest—long dead, of course, but they built sturdy nests. I slip off and consume a quick virgin at the nearby village. When I return I find her sleeping, fetal like an egg. She awakes in my palm to see the sun set into the ocean. We spend a week touring the place. At the cliffs, I hang my feet over and dangle her for a good view. She seems so appreciative after. So I do it again, and when I bring her back, she hugs me so tight it feels like she’ll never let go.

Then, one day, I am in that state between wake and nap. I spend a lot of my time there. Pandas are well known for their lethargy. The little ones eat bamboo because it’s easy to get though gives them little energy. I eat my sacrifices for the same reason. For my size they give me little energy as well. So as the gates of dream are opening for me, I know now she was down at my leg, on the hunt, I suspect, for some nice lice, though I wonder why so close to the ground--there must have been better hunting elsewhere. I guess we grow restless.

But she was so low to the ground, so vulnerable--I hate to think on it. She sees the giant scorpion and what better way for it to get at me but attack her. In desperation, she must have struck at my skin with her little spear over and over, hoping to get my attention. Hearing the familiar clicks of the scorpion scuttle, I lash out without thinking, slapping the source of the irritation. When I pull my paw up, there she is crushed. She twitches, whether in attempts at life or shouldering it off, I don’t know. I swallow her, knowing it is the only way we can continue to be together.

Quick in my rage, I stun the scorpion with a stone. With another sharp rock, I pin it to the ground and sever the tail. I rip each segmented leg from its body. I take each claw and crack them open like I would a lobster’s. Then I take a larger rock and smash the body over and over and grind it into the ground so that it’s only a dark spot, the stain all that marked the scorpion’s existence.

There is a volcano on the island. I climb it—to get away, to not see another living thing. I consider jumping into the caldera. Instead I sit at the base. Off in the distance on the dark sea is a ship. A giant ship. One big enough to hold me. I think of swimming out to this ship. A ship big enough to take me away from here to some new land where love will swing from all the giant, silent trees.

Craig Renfroe is the author of the short story collection YOU SHOULD GET THAT LOOKED AT (Main Street Rag Publishing Company, 2004).  He was a finalist for the Novello Literary Award and the Thomas Wolfe Fiction Prize and was nominated for a Pushcart Prize.  His story, "Stick," was a Million Writers Award Notable Story of 2008.  Currently he teach at Queens University of Charlotte.  His work has also appeared in McSweeney's Internet Tendency, Monkeybicycle,storySouth, JMWW, 3:AM Magazine, and elsewhere.