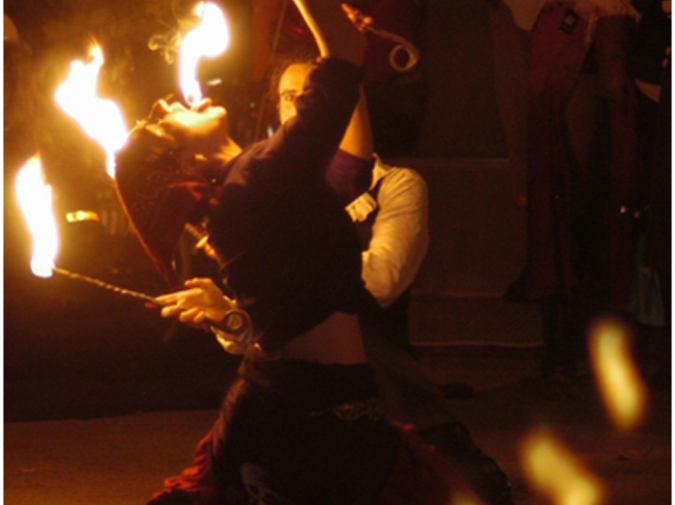 At school, we were allowed to wear costumes but were not allowed to bring treats. So we'd made the most of it -- we wore our costumes, we overcrowded the hallways with streams of sleepy ghosts. And often, through the punctured eyeholes of our masks, we tried to imagine how things might be if only we had girls. We envisioned an influx of princesses, maybe a witch or two or three positioned by the lockers. But we were an academy, an all-boys academy, and the possibility of both girls and treats were, in Principal Foster's eyes, completely out of the question.

"This school was built on a foundation of excellence," he assured us as we sat in assembly, as he stared out at the student body cloaked in bed sheets, in rubber masks. "Have I made myself perfectly clear?" A rippling of nods, the adjustments of costumes. I, in my devil mask, breathed in stale air through rubber nostrils. "Good," Foster nodded. "Because frivolity breeds more frivolity and that is something we will simply not stand for -- breeding of any kind."

Probably, what we wanted was what all sixth graders wanted: donuts, cider, slabs of pumpkin pie. Some caramel apples, maybe popcorn balls. We wanted the sprinkled powder of elephant ears trailing fingerprints on the desks; we wanted whipped cream mountains looming over the edge of paper plates.

And if we couldn't have that, then at least give us girls, breasts, the possibility of a saturation of females. Females lingering in the cafeteria, females bending to tie shoes, females, sipping water from the fountain with the tongues we did not know. All we wanted was the possibility, the mere possibility, and yet Principal Foster kept us ignorant of all of it.

That Halloween, I remember, we learned much about geometrics. "Let me show you about parallelograms," Mr. Brothers offered, and so we let him. I glanced to my left, and thought I saw a ghost touching himself there in his desk beneath his sheet. Later, I glanced over again to confirm this. And on my other side -- I kid you not -- a vampire cape shielded the jerky motion of another. Why, I wondered. What had we, the studiers of parallelograms, done to deserve such throbbing?

As the devil, certainly everyone expected me to take a part. To wedge a hand down deep in devil pants, to play with my devil dick. "You're the king of Hell, it only makes sense" -- this is what people would say.

"The parallelogram is a quadrilateral," explained Brothers. "And the diagonals bisect." When he spoke, he might as well have been undoing the top buttons of a girl's shirt, or exhaling in her ear. "A rhombus is a special case," he said, and they moaned and they stroked faster.

That night, after we left that school, that place, a wizard, a skeleton and I set out to trick-or-treat. And I'd tried to tell the tale about my math class. "So there was this ghost, all right," I started, then told them, then left them with blank stares. "Well, how about the vampire," I retried, noting the make-up and the fangs. Neither believed a word I said, especially the skeleton. "You're the devil," he reminded, "of course you'd feed us lies."

The evening darkened, even the candlelight grew dim. The first princess we saw that night, her chest was flat. Her wand was drooped, aimed nowhere. She approached a house before us and we all held back to watch. Jack-o-lanterns meant nothing to us then. After she received her treat she slid down off that porch. A nod to each of us, and she was gone in glitter and in sparkles.

Allow me to grip you, I begged, to grip that shimmering dress. A tug or a pull or a yank. A handful of hair.

I'll trade you my Mars Bar for a sniff of your neck, I imagined, though I had no Mars Bar to give. An excess of Almond Joys, surely, but she'd know a bad trade when she saw one. That princess left me hungry, and she trotted off to fairy land and caused my pants to ache. I, in the devil mask, knew nothing of geometrics. Knew nothing of equivalences or what might be beautiful about coordinates or shapes. I remembered that the rhombus was the exception, I knew that much, but this gave me no reason to reach deep.

But what I did know -- and what I wanted to know better -- was what a girl looked like out of costume. When zippers untangled, when skin skittered out. How wonderful, I imagined, to know that pale, frayed, bloom of a girl. We watched her go in pieces parallel to us.

You be the princess, I begged her as she left.

But allow me the devil in my bedroom under sheets.

B.J. Hollars of Fort Wayne, Indiana is currently pursuing his MFA in writing at the University of Alabama where he is an assistant fiction and nonfiction editor for Black Warrior Review.

He was awarded first prize in Backwards City Review's 2007 Fiction Contest, as well as named a finalist in Mid-American Review's 2006 Sherwood Anderson Fiction Prize. He has been published or has work forthcoming in Quick Fiction, Flashquake, and The Summerset Review, among others.