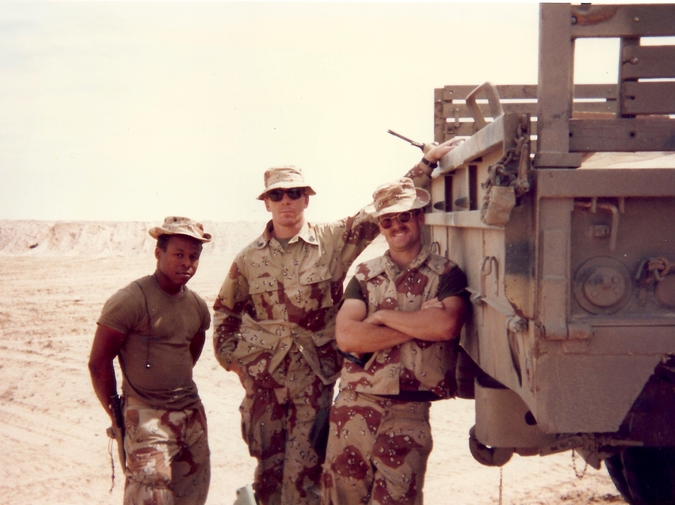 We’re sitting in a pit. It’s deep, well above our heads—a half-finished bunker, really, begun in the heady days when imagined snipers lurked behind every dune; when the sky itself inspired fear. But that was months ago—the war’s over and we’re now merely bored. There’s five of us: Thomas, from Opa-locka, Florida, reading aloud from Richard Wright’s ‘Native Son’; Travis, one of the cooks, laughing his smokey laugh at something Gibbs said about his South Carolina hometown, ‘where the owls fuck the chickens’. Harris, with his sleepy smile and forever unlit king-sized cigarette, plays DJ on a knockoff Walkman while cheffing chicken a la king, boiling in a canteen cup above an invisible flame.

Besides me—Travis is the only white guy in the pit. He wants to hear Garth Brooks’ ‘Much Too Young (To Feel This Damn Old)’—which could be any one of our theme songs. But Thomas, not even looking up from his book, announces matter-of-factly: ‘Ain’t nobody wanna hear Garth Brooks.’ Everyone laughs, even Travis. And that’s that.

As lieutenant, I’m allegedly in charge. I use this bit of leverage to hand Harris a mix-tape from Norma, my jewelry designer girlfriend back in Honolulu. Harris reads Norma’s title aloud, written in ball point pen on the cassette: Fuck Music. He smiles, shaking his head appreciatively, holding the cassette for everyone to see, like a trophy. Harris pops the cassette, hits ‘play'; dashes Tabasco from a small bottle onto his dinner. Horns cut the shit-talking—clean, like a blow from a butcher’s cleaver. They herald the arrival of something serious, a ’72 Lincoln Mark IV barreling down the Dan Ryan expressway at 3am maybe; something undeniably American. We go silent as ‘These Ain’t Raindrops’ fills our gut with bottomless longing. We’re suddenly transported, far from this hole in the Saudi desert, following an ancient, yet familiar map of heartbreak. Around us, the desert night closes with startling finality, like curtains after a show. The song slowly fades. Travis’ cigarette glows orange, making a small hiss as it burns; Harris’ canteen cup bubbles contentedly. After a long moment, Harris breaks the silence, almost like an accusation:

Drink: Contraband Wild Turkey in a sun-hot can of Coke.

Brian O'Hare is a U.S. Naval Academy graduate, former Marine Corps captain and disabled combat veteran. He's a former Editor-at-Large for MovieMaker magazine and an award-winning documentary filmmaker. Brian’s work has appeared in War, Literature and the Arts, Liar’s League - London, Fresh.ink, The Dead Mule School of Southern Literature, Santa Fe Writers Project and others. He lives in Los Angeles. You can follow his work on Instagram and Twitter at @bohare13x and brianohare.com.