From Laura's Pocket Guide to the Americas: Belize City & Beyond 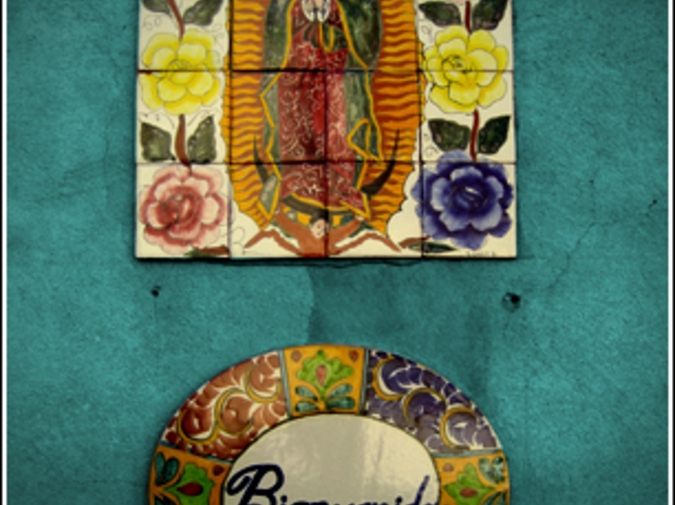 Come dusk the lie will prevail, and even those who know better will venture out in the belief that the evening is cool. It isn't. Welcome to ramshackle, angular Belize City. The cabbie will take you along the lip of a jagged spiral, executing an endless series of left turns. Each street will be just a little bit darker than the one before. What to look for: pieces of light. The glare of a moped headlamp; a string of fairy lights over a three table café; an oil drum barbecue full of coconut shells on fire. And the fat pink thigh of a dead white man laid out on a slab, visible through the broken door of a basement level morgue. Do your traveler's penance cheerfully. After a short drive from the Ladyville airport, you will discover you've missed the bus. You always miss the bus. And that means a night in this city.

When you see that fat man's leg again, tap the driver on the shoulder and say, "Hey Rudy, you're going in circles." Rudy will smile, and it will be one of those unknowable things. Does he grin from pride, from humiliation, or for secrets? Eventually he will yank the cab into an alley between two tall, cramped houses perched on the shell packed edge of murky water. See the water for what it is. Here the ocean seems more like a canal, dark and oily, lapping grey green against a border of huge wooden pilings. Rotted strands of rope ride the chop. In the near distance, two enormous rusting freighters try to dull the Caribbean sky.

The guesthouse has just changed management. And it is being remodeled. A sun bleached, round bellied ex-pat from Montana will be there to greet you. He'll be the one who looks like a troll in a rubber Nick Nolte mask. He scuttles; hide your revulsion. Notice that when he squints all you can see are the reds of his eyes.

Tip your driver. Rudy isn't crazy about leaving you here, but he's more nervous about a shadow behind the house. He'll dump your duffel, accept the gratuity, and scramble away. Hold your hand bag close for comfort. It's full of things that don't belong to you—stockings, spoons, a peg board game. A beautiful mp3 player, ruby colored and slim as a tampon. Very expensive. Even the bag is stolen. "Y'all eat?" the troll may query. "I can have Clive do you up an om-a-let, but I'd rather keep him out here on watch." Clive is the thin, dark Belizean leaning against the side of the house, the figure that troubled Rudy. Clive will appear as if he wants to be both in front of and behind the building at once. There is a hand gun tucked in his belt.

Six months ago the owners were a sweet Canadian couple, comforting and gullible. This new landlord is a turd. Sign in as hastily as you can, and climb the sagging but fresh painted steps to the second floor. Your room has been given the same therapy—make up instead of surgery. The stink of new paint over moldy walls is almost overwhelming. The coverlet is stiff with sizing, and the mattress makes noise, as if stuffed with butcher's paper. Your window looks out onto the dark water cluttered with work boats. The crushed shell margin between the buildings and the dock is crisscrossed with planks, pipes, and cinder blocks to be used in the remodel.

That's why Clive is needed. To guard building materials. He is not concerned with what goes on inside the guesthouse. He's not there for your security.

Stay in your room until morning. Read or something like that. Perhaps a bright anole will dart across the bathroom mirror. He is the only other guest. Outside, observe the hunched figure of the turd lord enter a garage where an outboard motor is propped up on sawhorse supports. If he speaks to Clive, Clive will respond with the slightest nod. Clive is either very economical with his body language or he hates his employer's guts. To work on the outboard, the troll will need to fire it up from time to time. No one will sleep until he gives up for the night.

In the morning, expect an exquisitely prepared breakfast of scrambled eggs, fried plantains and cream, and lukewarm papaya juice. Fixing the morning meal is Clive's final duty before he knocks off. He wears his gun under his cook's apron. The landlord will finish his breakfast and read the paper at the table. He'll provide transport to the bus station, an experience you should dread.

The landlord is not curious, so he'll ask few questions. He may tell you tales. Dread these. He boasts proudly that Clive is the "last good Belizean" in the city. Please do not interrupt with the information that you are half-Belizean and that you happen to be in the city at that very second. You are a bandita, of sorts. The high ground may be yours, but not everyone would agree. Bite your tongue and let the turd-troll ramble on.

The landlord's favorite story is the one where Clive shoots a man for trying to steal a bundle of soffits from the property. Don't ask what soffits are, you'll be ignored. Clive shot this thieving boy in the thigh, and then let him bleed to death because he, Clive, refused to leave his post to make the phone call. He doesn't carry a cell phone. The landlord won't explain why he himself didn't call the police, and you shouldn't ask. That is not the point of the anecdote. The point is that Clive is a good Belizean. The last good one.

What you might do is this: laugh, like a debutante. If you speak Spanish, and can do so with breathtaking rapidity, you might hazard a curse, something along the lines of, "Your house will rot into the sea you know." The landlord's Spanish is poor. Don't speak Kriol, he knows that. If you get away with the fast Spanish, follow up with: "I will rob you blind, Montana." Do it right and the landlord will be flattered, relaxed. Newspaper folded under his arm, he'll rise from the table. "Goin to the toilet," he will say, winking as if that's code for something.

Your food will sour in your mouth. That's only natural. He'll slip into a corridor, expecting you to wait for him. The thing about these old Caribbean houses is that every sound from every room travels a network of creaking floorboards, joists, and iffy plumbing, and there is no aural privacy at all. Hear him strain and breathe. Hear the newspaper pages being turned. Hear the paper roller spin.

It's his own fault. If he had more you would take less, but it is the landlord's miserly approach to décor and comfort that will ignite your natural inclinations. The drawers in the kitchen are a waste of time, there's nothing there. Check the little room off the back. It isn't a pantry, but an office! The most depressing office you will ever see, with a desk, an old computer, and piles of invoices spread across every surface. The only gesture toward humanity is inhumane—look for the aquarium with a young iguana trapped inside. Two wedges of apple for company. It is possible that the iguana is perfectly senseless and therefore happy, but convince yourself that the creature is unloved.

DON'T STEAL OR LIBERATE THE IGUANA. I can't stress this enough. But in a mood of righteousness, discover the landlord's passport far back in one of the drawers. Take it, take it, take it.


Venturing Out: You Better Belize it!

From Belize City, you can take an inexpensive chicken bus into any of the territories, preferably a local, which will take two or three times as long as an express. This will give you time to really see the countryside, connect with locals, and plan the rest of your trip. Sample itinerary: begin in the Cayo district, where you may Explore the ruins of Xunitunich, Canoe/kayak down the fabulous Macal river, Visit the morpho butterfly farm, and Hike in an apparently featureless landscape. Take plenty of pictures. You will discover cows in the middle distance of 70% of your photographs. By the end of a week you should be able to detect cows with your naked eye.

You may choose to stay in an inexpensive room in San Ignacio, sweating out the nights on an airless balcony waiting for the Montanan to hunt you down. Or, you can shake it off while enjoying cool beverages with any number of Austrian backpackers in a dirty hippie pub. It just depends on your style. Keep your possessions close at all times. Charming though it is, San Ignacio remains popular with amoral passers through. It is also a place of imprudent relief. If you have ignored my earlier advice, you can leave the pilfered iguana at the Center for the Iguana Conservation Project in the lobby of the 4 star San Ignacio Resort Hotel before catching a rickety minivan tour to Parque National Tikal. Once you cross the border into Guatemala, you may never make it back again, so why not make a real adventure of it? Come or go as close to death as you have ever been. Reader's favorite: guns for drugs and stranger sex atop the Lost World Pyramid at sunset ("awesome and magical" —TripleJim/New Berne, NC). At the end of it all, we recommend giving the Montanan's passport to a child or a madman. And give yours away as well. It really doesn't matter. Just have fun!

Laura Ellen Scott's best stories are online at Identity Theory, Mississippi Review, Eclectica, Plots With Guns, and Ploughshares. She also has a dirty joke up at the Dogzplot Flash Fiction blog, providing nice career contrast with her inclusion in the upcoming Paycock Press anthology, Gravity Dancers: Even More Fiction by Washington Area Women. Her blog is Probably Just A Story.