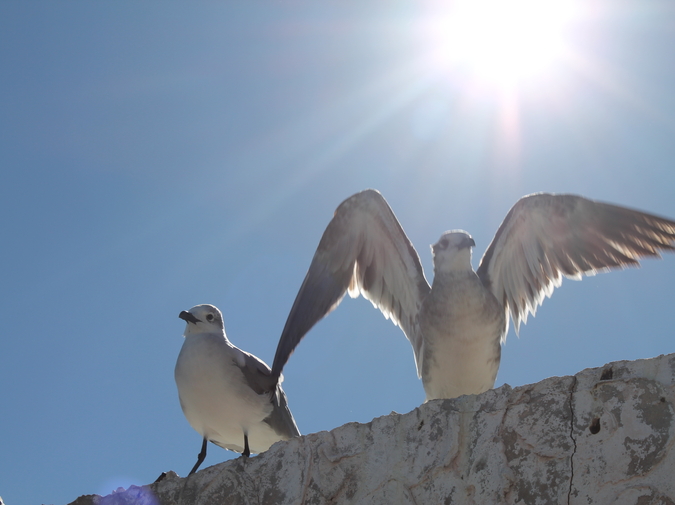 We skipped the usual steps. We met and fell in love and started playing house all in one day. We believed something together, and when we believed it, it was true. Nothing else more true.

When we met, this big, empty glass fishbowl sat on the table in the coffee shop where he was working. The only table with an extra seat, which he happily let me take. As we talked, our words floated around in the air, circling our heads and rushing past our ears, and some of them fell into the bowl. The words that meant wanting. That meant promising. That meant owning. All of these words went in and stayed there. And the more words that filled the bowl, the closer we felt, the more those words meant, the more real it all seemed. We felt so much meaning that day. And we liked the feeling, so we kept speaking words into the bowl.

He wanted me, only me. Wanted to be mine. Wanted me to be his. He promised safe. Promised stable. Promised us. Or at least that's what I heard. Either way, I believed him, and he believed him. That's the thing. He believed everything he said. I know because I asked, are you sure? I said, you have to be sure. He promised he was. Those words flew into the bowl, too.

I guess we were naive. Thinking these promises true. That we could make them true. That they could stay true. Thinking this bowl of words the key. We believed though we knew better. Believed that good, real things come easily. Believed we had it all. That we'd found that thing. We believed in fitting and rightness, that we had it. Believed nothing dangerous about jumping into the deep end blind folded.

It was like we'd known each other for years. Like we'd always been together. Even though I didn't know his mother's name or if he had a sister or if he smoked or if he was one of those weirdoes who didn't like chocolate.

We took the bowl of words with us, placed it on his coffee table, and continued to fill it. He said to be comfortable, to make myself at home. I settled in. I bought a second toothbrush. I took a drawer. I took two drawers. I rearranged his furniture.

Until one day he stopped believing, for whatever reason. That morning he'd looked happy, had kissed my cheek and looked deep into my eyes and spoken more feeling words for the bowl. That evening he didn't want me anymore. He said we shouldn't have started in the first place. Said it like it was all my fault. Like I'd forced happiness on him. Like I'd trapped him in our dream, the dream he helped make real. Like he'd never believed. Never promised. Never wanted. Like none of the words in the bowl came from his mouth.

There was an audible cracking and crashing, an exploding, and pieces of the glass bowl that held our beliefs grazed both of our faces, leaving small traces, visible evidence, of the break, the violent jerk of our sudden entrance back to reality. A shard stuck in his thigh, just inches from that part of him that I liked to think of as mine, that part of him I would take into myself and hold there, that part of him that connected us. Another shard stuck in the crook of my arm, one of his favorite places to kiss. Others in both of our legs and hands. Our clothes had tiny tears where glass had broken through. Small pieces stuck all over us.

He pulled out the piece of glass lodged in the crook of my arm, and we saw it wasn't glass but one of the words, an owning word that used to be beautiful but now was ugly and sharp and fractured. I carefully removed the one from his thigh: a promise unfulfilled. We took the words out of each other, slowly and gently. Not saying a word, afraid of what would happen if we let more words escape our mouths. When only one word remained in him, I stopped. Like if I removed that word, it was really over. Like if I left it there, I could keep him. Like I could make this real thing not real. Like I could make the truth a lie and the lie true. But he reached down and took out that last word. The broken words lay in a pile on the floor. He swept them up and threw them away.

We looked at our wounds and looked at each other, both so clearly broken. We pictured the cuts as scars and knew they wouldn't fade. All because he'd stopped believing. I begged him to believe again, begged him to take the words from the trash and piece them back together.

He said, impossible. He said, those words were lies. He said, once belief is lost, you can't go back. He said, you can't discover truth and know it and disregard it.

All I know is that I want those things that were true to be true again. I mean I don't care that they were lies. I mean I want him to lie to me again, and to mean it.

Elise Matthews lives in Denton, TX where she studies fiction and teaches freshman composition at the University of North Texas. She serves on staff for American Literary Review and North Texas Review. Her work appears in Jersey Devil Press.