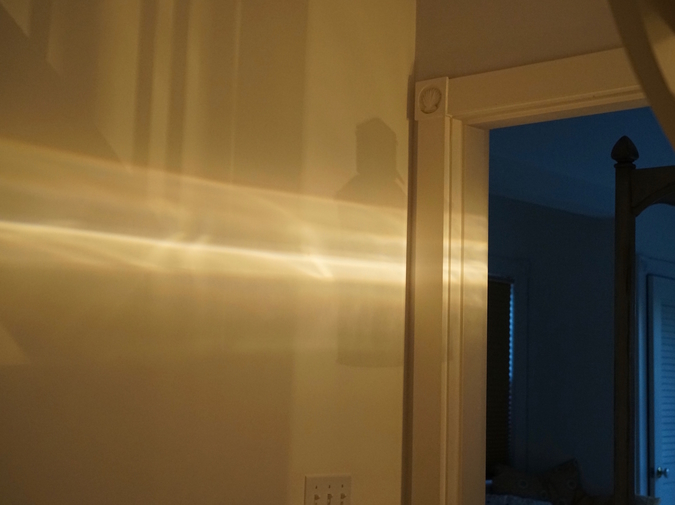 Don’t know whether I was really desperate for weed or just plain curious about that dude, Duffy, but for whatever reason, I found myself back at his trailer, on the couch, watching TV and smoking his shit. He had on E.T.. Every now and then he would get this weird look on his face, usually when Drew Barrymore was on the screen, and let out a weird grunt, take a sip from his Coke, repeat—didn’t talk or nothing.

I saw no signs of the child or the lady from the time before.

He set his Coke down, silently, then faced me. “Why? You in the mood to fuck or something?”

I shuffled, fumbling for something to say. “No, I don’t know. Why?”

“Jerry’s back there now, doing his thing,” said Duffy. “When he’s done, you can have a go. Hundred bucks, one hour.”

He studied me a minute. “Sure, whatever you want.”

A few minutes later a man came out of the back room, had blood on his knuckles, and said, “There you go, man.” He threw a hundred dollars on the coffee table. “Gets better every time,” he said, and walked out, shutting the door, hopefully forever.

Whoring out his girlfriend or wife or whoever—or so I thought.

But about fifteen minutes later, the lady, his wife or girlfriend or whatever, she came in through the front door of the trailer with a few bags of groceries. I was instantly confused, felt a deep disgusting film take hold of me and cover my entire body, so that’s when I jolted up and said, “I’ve got to go, man. I’ve got to go. Forgot about something. I’ll see you later,” and left.

I mean, it seems so obvious now that I should’ve never gone back there.

But I did, I went back, one last time, because something was eating at me from the inside, like my guts were filled with thousands of rats, yet they couldn’t make a hole big enough to squeeze through, no matter how much they chewed—and even now, after I went back there, did what I did, the big blur of my life, I still feel all their grimy yellow teeth tearing into me.

Guess I’m just not ready to admit I did anything wrong. I really don’t think I did, honestly.

Aaron believed in the shock-value entertainment of death in videos, yet he would never understand all that fucked-up death in person. Trust me, I still don’t. But I will, eventually I will. He never will. It’s the kind of information you have to take your time with, process in a darkroom like a film reel, so that you can move on with things and enjoy yourself—and maybe even for the first time in life.

Aaron called and told me about Cody’s behavior at the party, and, to be quite honest, I was stunned. Cody had always been more respectful to people than that. But we both knew he’d changed, it was undeniable. I mean that’s what this is all about, isn’t it?

Cody picked me up and took me out to lunch. Nothing fancy, just Taco Bell. We sat in a booth there, talking about his newfangled behavior.

I shook my head, said, “I know. I guess that’s why it’s so fucked up. You don’t even remember doing anything.”

“Far as I’m concerned, if I don’t remember, it didn’t happen.”

He shook his head, “Yeah, I know. I don’t know, I’m just going through a rough patch. Things’ll get better. I’m working on it.”

I nodded, things went silent. We listened to people ordering their food.

He grabbed my hands, burritos between us, and said, “Shit, Sam, you can tell me anything.”

I looked at him, all of him, and knew he was telling the truth, that he wouldn’t judge me, if that’s what you’d even call it, if I came out with all of it and told him about his dad’s sorry fucking behavior, but instead, I shook my head, and said, “No, I can’t. I’ll tell you, just not now. I can’t. Sorry.” And that was it. I was scared of everything and nothing at all, felt like I was living inside a cage inside myself inside a hole inside the earth.

I wasn’t aware until much later that Aaron had had a similar talk with Cody. Apparently they didn’t do anything, these talks.

That was a week before all the other shit happened, if you could believe it, I still don’t, even when I’m right there, with that thick fucking glass between us, and I feel like screaming Why didn’t you listen to me? I was in so much pain.

It was the day before my move. Samantha called me, she was frantic. I couldn’t really get a whole lot out of her other than “Cody” and “kid” and “arrested” and I didn’t really know how to calm her down, either, so I told her I’d call Larry and be over to her place in a few minutes to pick her up. But the reality is, the details were still blurry even after the call to Larry and the tear-filled chat with Sam. All we knew was Cody had been arrested for something really awful, details still blurry, and that he hadn’t really been charged with anything yet, because they were still investigating the crime that he was confessing to. He had called Larry before he turned himself in, just said, “I’m going to prison for the rest of my life. Just wanted to tell you I love you.” And Larry, not fully able to comprehend this information, said, “What the fuck are you talking about, Cody?” “I put him to sleep. The kid, I sang him a song and put him to sleep,” he said, and nothing, a pause, then he walked into the police station and turned himself in.

I pulled into the driveway at Sam’s house and honked the horn, tapping on the wheel, impatient, waiting, and occasionally looked down at my phone to see if I had a text. No texts, nothing, just more waiting. I honked again.

Finally she came out and hopped into the car.

“What the fuck is going on?”

“They’re saying he killed someone,” I said.

My phone buzzed. A message from Jared: I luv u.

I put the car in reverse and turned down the radio. Samantha was crying, but they were silent tears. She was keeping it together pretty well, considering. Something about all of this just seemed so much more like a dream than reality or something. I don’t know. Not really a dream, either, but like some kind of weird fugue or amnesia.

“Do you think he killed someone? Why would they say that? He wouldn’t kill anybody, would he?” she said.

“No. Not Cody, he can’t even handle the Dwyer video.”

Took me a few weeks to hang on to the hundred bucks I needed, but as soon as I had it I went back to Duffy’s place and smoked weed with him for a bit, then told him I wanted to give it a try, you know, with the kid. He leaned in close and said, “Hundred bucks, one hour. Anything you want.”

I handed him the bill and went into the kid’s bedroom. The kid was just sitting on his bed, playing with a doll. The light was dim. I sat down beside him and brushed the hair out of his eyes. He looked like a ghost just back from war, had a look in his eyes, something I imagine we’d wanted from our visit to Stull. Something I never want to see again. There was nothing in there, big eyes like drained pools. He was a shell. I put him on his back on the bed. He didn’t even try to fight it. I put him on his back on his bed and slid the pillow over his face. It was stained yellow with grease. It didn’t take long and he didn’t fight it. When he went limp, he looked less vacant, relieved, filled with light. I crossed his arms over his chest, put his head on the pillow, made my way out the window, and immediately drove to the nearest police station to turn myself in.

There were clouds. There was a sidewalk. There was a pole. There was grass. There was a flower. Then there was me. I was alive. I was so alive I looked up at the sun and knew it couldn’t blind me. It peeked through dark clouds forming. And as I stood there, ready to turn it all over, I thought: There is only us. Then the sky boomed, gurgled, cracked itself open, and down came a weeping of rain. The clouds weren’t crying for me, they were crying for all of us—cleaning the streets, making a rainbow—the loudest fucking silence I’ve ever heard.