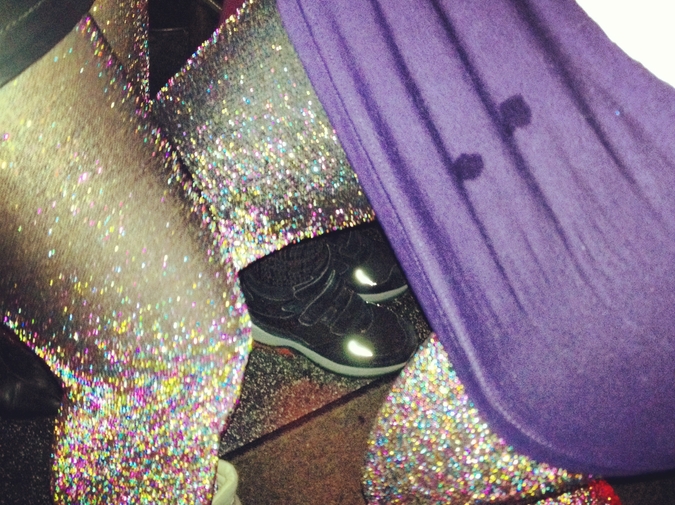 If it hadn’t been for my day job, I never would have gone to Steve’s Shoes. I was a personal assistant to a famous actor’s wife, which meant I did the errands she didn’t want to be bothered with. It wasn’t a bad job, maybe mildly demeaning, but mostly I enjoyed spacing out and listening to music as I went from picking up her dry-cleaning to buying her groceries to getting her shoes fixed.

My boss was one of those people who had hundreds of shoes. Her shoes probably had their own closet. Maybe their own bedroom. She must have been stomping around in them or lending them out, because about two times a week I would be sent to Steve’s Shoes to have Steve resole or fix the heel on several pairs of her designer shoes.

Steve was the most rakish man I’d ever seen. He was a living wire hanger, with silver hair and clothes hanging off his limbs. His shop was unique, both a shoe repair place and a small gallery.  At the back of the store, there was a counter where you brought your shoes, and behind it was a workshop, where Steve did the repairs. The front of the store had all these odd items that were vaguely on sale, but mostly existed to create environment. Glass bird feeders, tiny ladder sculptures, deconstructed silverware.

“Try to turn this lamp on,” Steve would say, challenging a customer who was dropping off their shoes for repair. The customer would fumble around, looking for a switch or a knob on a minimal spherical orb. They would do so until they struggled and gave up. Then Steve would lightly wave his hand over the lamp and magically it turned on. The customer would smile, try herself, and discover that through the power of a motion censor, she had the same magic as Steve.

I placed a pair of leopard print Christian Louboutin stilettos on the counter to be resoled. Steve’s eyes widened in a way that I could tell he thought they were ugly.

“Doesn’t matter to me. I’m just a repair man, not a designer.”

“Have you ever thought about making your own shoes?”

“Not really game for the fashion designing business.”

“You don’t have to have your own fashion label. You could just make your own one-off designs to sell in the shop.”

“Doesn’t interest me.”  He rang up the price for repairing the shoes. “But if you’re so interested, why don’t you design them yourself?”

I laughed. “I don’t know anything about shoe construction.”

“Of course you don’t. That’s why I’d be doing all the construction. You just design them.”

“That sounds great, but I don’t have the money to order custom designed shoes.”

“Well they wouldn’t be yours, I’d keep them here in the shop. I’m envisioning this more as a challenge for myself. You submit a design to me and I’ll try to see if I can construct it as beautifully as possible.”

“Seriously. Next time you drop off shoes for your boss, bring me several sketches.”

“And be creative. Be artful. More sculpture than function. I trained as a cobbler in Italy for five years. I know how to construct a basic shoe, I want a challenge.” He looked at my feet. “The boyish little brogues you are wearing are adorably gamine, but sketch something more adventurous than those.”

I worked on my first series of drawings. In college, many of my friends had studied architecture. I had always felt like a lazy liberal arts major compared to them and the long hours they put in at their studios. But now, I was an architect too, a designer of structures for the feet. My first design was a futuristic shoe made of geometric silver shapes and thin gold wires that orbited around the ankle. The second pair was a chaotic mosaic of computer chips that glowed with LED lights. The third was a sleek black pump, with an adjustable heel that could go from being a kittenish 1 ½-inches to a dominatrix-worthy 6-inches, depending on the occasion.

“Hmm,” was all Steve said, when I handed him the sketches. I wondered if I had disappointed him somehow. If this was not what he had meant by be creative, be artful. If this was not more sculpture than function, only wild and childish. So many times I’d handed stuff in and it had not been what people wanted.

I worried about the next time I’d have to visit Steve’s Shoes, but when I returned the following week with several flats to fix, I saw in the shop window a pair of shoes with geometric silver shapes and thin gold wires, a pair of shoes made of computer chips lit up with LED lights, and sleek black pumps with an adjustable heel.

And so it began, my secret life as a shoe designer. I would submit the designs to Steve when I stopped by with my employer’s shoes and by the next visit or two, they’d be sitting in the shop window.

Customers and visitors to the shop got a thrill out of these shoes. How could they not? Steve put ridiculously high price tags on them, but strangely enough, a few people actually bought lobster telephone shoes for $795 or autoharp shoes for $990.

After deducting the cost of materials, Steve split the money with me. It was the first money I’d ever made that didn’t come from personal assisting or all the jobs that I’d had before personal assisting. Summer jobs, retail, waitressing.

Gradually I spent more and more time hanging out at Steve’s Shoes. I had asked Steve if he ever needed extra help in his shop and he had responded, “Always.” I sat at the counter, leaving him free to work on repairs in the back. I didn’t get paid to do this. As long as you wanted to be someplace, nothing you ever did there felt like work. We didn’t talk that much, but we seemed to enjoy each other’s company all the same.

Every once in a while, I would also apply for better jobs and one day I got one. It was in another city, in another region of the country. I was excited to quit my personal assistant job, but I was sad when I told Steve I’d be leaving. He just said, “Okay.”

On my last day helping him at the shop, I was thinking about how to say goodbye, when he asked, “What’s your shoe size?”

“I thought so. This is my first attempt at an original design.”

He placed what looked like two blocks of ice in front of me. The cleanest of lines gave them the slightest suggestion of being shoes. They were wedges with a five-inch heel. The exterior looked like frosted glass, which meant you could not see your feet inside them.

A few minutes later, I stood outside wearing the shoes Steve had made for me. I had no idea how I was going to walk home in them, or even take five steps without falling over, but boy, could I stand tall and upright.

Kristen Felicetti is a writer living in Brooklyn, New York.  Her fiction has appeared or is forthcoming in Pear Noir!, failbetter.com, and Metazen. She also recently wrote and recorded The New York Crimes, a modern radio play, which can be heard at http://thenycrimes.com.