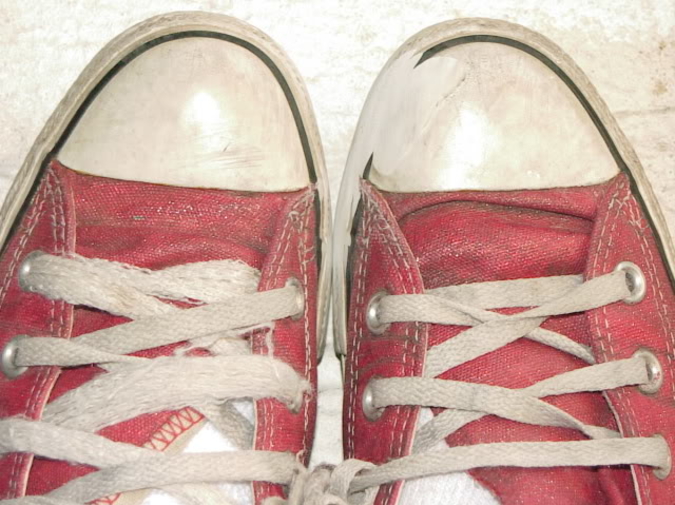 Am I the only one who  remembers David Lee Roth’s track suit period?
Early 90’s, sitting in a shallow grave outside The Roxy, The Strip, The California.

Flannel sleeves tossing needles and dirt--DLR balding, a bloating paunch;
stressed syllable against a zipper’s profile.  Iambic panic with a 5150 hangover.
I never got over seeing my first love with a new man, too. Pastel pale, sunbaked
contrast of leathering handbag skin.  Cracked like thirsty, split spandex seems.

DLR got high, and then he got busted.  Broke.  Handcuffed. NYC, USA.
His zombie walk last call crawl cross continent to be picked up in Washington Square
holding.  One hitters in Seattle shadows--Spring Break one liner and I was

a junior, crushing on a Freshman like the Verve Pipe. I denied you, David.
like Peter to Jesus, tabernacled the Jesus of Cool--Nick Lowe’d
enough to square peg my record collection into bad mix tapes and worse ideas.

Who knew she was a suicide blonde in the strictest sense? Who knew she dreamt of nature boy platinum? Didn’t trust my voice so I borrowed their chords.  Never mind the Memorex.

Found her wrists in a cornfield with the seniors after Homecoming.

Years later I read (that) Rollins
worshiped at your altar.  That
you owned art galleries.  That

your brown m&m-ridder-legend
was a way to make sure clubs
paid attention.  There’s so much

difference between listening and
hearing or following and following
along.  Twenty years later and I

count the syllables of my own
torso.  Smoke rings ebb and
echo growing grey hairlines.  I

hold a shovel in one hand and
Fair Warning in the other.  I
turn “Unchained” up loud enough to drown

Like that a-ha video. The one animated like an issue of Love and Rockets. An “All Ages” girl put the Cap’n Jazz cover on the very end of a mixtape for you. Cut out about a minute into the song. Your bodyclock used to be forty-five minutes long. Memorex clear case with cellophane shapes floating in front of magnetic tape. She photocopied zines on the school Mac.

Green Umbros. Thumb-hook the waistband. Marble composition notebook tucked between her car seats. Fingernail. Gromets of an American flag clanged against the pole. Hammock hidden from the street by untrimmed hedges. You walked home past abandoned churches and a Taco Bell where your roommate was mugged last summer after English class.

Pissing behind the CVS dumpster, quarter to three on a Tuesday night. The cops catch your friend, bullet belt and pants around his ankles. Chain link fence skins your back. Your ankle grinds like burnt clutch on your girlfriend’s Jeep. She keeps a pair of dog tags in her apron. There is a divot in her hipbone.

has little to do with conversation
or the diner jukebox.  (Mutual) acquaintance

talked about our Hotel California girl
in third person while licking lips
like an envelope.  Letterbox

chest opens in the seat across
from you.  Dipped his ponytail in coffee,

paid the bill in loose change.
No one to convince anymore.


Could You be the One?

(then it) all vanished: the major label.
tour support. the chance to tell your story.

Think of closeted twins on heaven hill.
Grant and Bob: Were they ever a couple?

When Joan invited you to the couch, did you know it was oer?

Restaurateurs and Heroin.
The H.I.V. scare you wore as a badge of false positive,

hardly a ghost in someone else’s songs. Wandered
around the racks at Cheapo and Electric Fetus.

Maybe it has happened quietly without us.  It
doesn’t matter as much anymore. Poison years
diffuse in the Mississippi River. Clean.
Here is the bass drum

in the center of the room.  Here are the tea
lights in a cold water flat,
each revolving like a turntable without a record.

You woke up to the news that Jack Bruce
was dead and you were unemployed.      Half
and half on the counter. Rosary on the nightstand.
Hotel ice machine kept you up all night. The steel
shovel, an easy ditch digging metaphor at a Super 8

thirty five miles from Bloomington.  Abandoned bird nest
in the awning outside overlooking an abandoned Wendy’s
and the interstate. A truck driver makes a U-turn in the
gravel part of the parking lot. A box of Wheat Thins and
off-brand Oreos watch CNN with you.  Your phone

is a voice in your head on vibrate. The travel size
soap is greasy. How many times have they laundered
these sheets? This sandpaper wash rag. You shave
with a fresh razor. Rinse. Revision. Sink.

Jim Warner's poetry has appeared or is forthcoming in various journals including The North American Review, RHINO Poetry, New South, Midwestern Gothic, and is the author of two collections (PaperKite Press). He received his MFA from Wilkes University, and the former managing editor of Quiddity. Currently, Jim is host and show-runner of the literary podcast Citizen Lit and a faculty member of Arcadia University's MFA program.