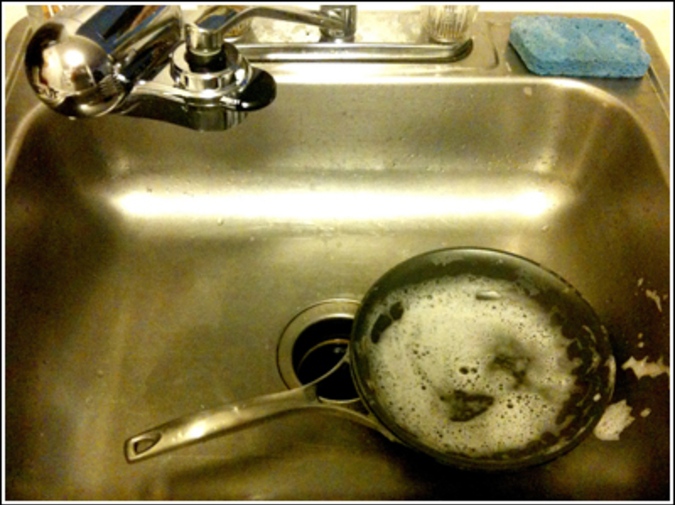 He was putting potatoes into my hands.

“What else you need. Salt?”

He stepped over a stack of plates. I moved around them.

The jar was on a table next to the sink. He had unscrewed the lid and was scooping the salt into a bag with his hand.

“This? Okay. This is good. You need more you let me know. We have plenty of salt.”

He set the bag on the potatoes so that it rested against my chest.

“What else you need? What else. You got the plates. I gave you plates. No? Yes. And bowls. You need more bowls? I cleaned some.”

I looked into the sink. There were bowls in it.

“No. The bowls I have are alright.”

“Alright. The bowls are alright.”

He was smiling. Even in here his face shined. Gray in his stubble.

There was a doorway blocked by a mop bucket and he pushed the bucket aside with a bare foot. There was a rust ring on the floor. He went through the doorway.

I was surrounded by dishes. Nowhere to set the potatoes and the salt quickly.

He came out from the shadow. Nothing in his hands.

He was sliding the mop bucket with his foot.

“I have garlic. It is here somewhere. You put it with olive oil and cook it brown with anything and it is good. I do not have the olive oil but it is something you can get. I am very sorry. At one time I had the olive oil but now I do not. You can get it though and use it to cook with the garlic.”

He was kneeling now. Taking things out of a bucket beneath the sink. A net of dried sponges. A rag.

“No. No trouble. I will find the garlic. It is no trouble. I am very sorry about the olive oil though. I am afraid there is nothing I can do for you about that. But you can find it. I know you can.”

I stepped forward. He pushed the bucket away and stood. He was looking at me. There was nothing in his hands.

We were standing with the dishes on the floor between us.

Then he turned slow. Moving toward the sink.

“What about rice? You eat rice with anything. I know you need rice. Even if you have it you need it. I have rice here. I will get you some rice.”

Moving away from the sink.

“Stay away from there.”

He stopped. Turned. Looked at me with his hands up.

“I am looking for the rice.”

He knelt and lifted a bag. Set it on the counter. Picked at the stitching with his fingernails until a corner was opened. He took a cup from a cupboard and titled the opened corner down and spilled rice into the cup. When it was full he tilted the opened corner up and rolled the bag away from himself.

“You need more you come down. We have this bag of rice. You come down and knock on my door. I have the key. We come in and I will give you more rice.”

He held the cup to me. I watched his eyes. He was looking low on me. You should take him in. You should do it now. It was the best idea. You knew what to look for. They had told us. They had told us and told us again. You would have to be not right to think this was imagination. But if I took him now then she was gone now also. She was going to be gone anyway. We had had too much interaction. Most of them knew to stay away and not get involved but some of them either were drawn to it or had no choice. I was not sure yet which it was in this situation. Either way she had had too much interaction with me and so had Fermin and they were gone. There was no way that either of them could get back now and you should do that which is quickest. Quickest and what you are supposed to do. But everyone has their fun first and I want to have mine as well. I certainly have earned it. There is no dispute about that. And what I want to do is not going to change anything and if I take him in now — the girl.

Fermin lowered the cup. Without moving his eyes he set it on the counter. From beneath the counter he pulled a stool and sat on it. He put his feet on the crossbar of the stool. He put his elbows on his knees and rested his forehead on the butts of his palms. I could not see if his eyes were opened or closed.

You should take him in.

Fermin stood quick. He looked at me.

He turned. Still looking at me. He walked slow to a box in the corner and knelt.

“This is a good one. This one is best. It is important.”

He took a yellow onion from the box and stood.

“What do you call this one?”

He walked to me.

“This is a good one. It is the one that makes everything better. You know?”

He was looking at the onion.

“You cut it this way. Into slices.”

He was holding his hand flat with the side of it against the onion.

“When you do that it will make you cry. But it is okay. Everybody cries with these. After you cry you cook it.”

He looked at me.

I looked toward the floor.

He leaned toward me. I could smell his breath.

His hand was on my shoulder. It was shaking. His fingers squeezing in spasms.

Outside it was bright. There was the heavy air still. There was the sound of the frogs that lived in the bushes and that nobody ever saw. There was the wall that was pastel yellow with the paint flaking and I squinted and looked away from it as I walked up the stairs. The door was still ajar. I pushed it open with my foot.

The air conditioner was rattling and dripping water along the wall. It was a concrete wall beneath and painted mint green and it was stained where the water dripped. I set the things on the table. Turned. Took the pistol from my belt and dropped the magazine onto the bed. I pulled the slide back and the cartridge dropped and rolled and clicked against the magazine. I dropped the slide into place and put the pistol between my belt and hip.

She was at the sink. She was not wearing a shirt.

She turned to me. Her eyes were wet. The lashes stuck in clumps. She looked very sexual. Then she turned to the sink.

I sat and looked at the food. It covered almost all of the table. What a small damned table. They could only expect to be hungry when they made their tables so small. They were setting themselves on a course for it.

“I have to go down. I forgot something.”

The muscles in her back tensed. Her skin was smooth.

I looked at the table. Salt and potatoes. An onion. Maybe after I would go and look for some olive oil. Discover if it was the way that Fermin had said it was.

I took the onion. A sprout was beginning to come from the top of it. Well. That was the way he had said it was. No. He had been talking about the garlic.

Walking to the door I dropped the onion into the garbagecan.

C.A. Harrison has lived in California, Puerto Rico, South Korea, and Spain, and currently lives in Mexico. He has done disaster relief in Haiti. His collection of short fiction, In Aftertimes, is forthcoming from Aqueous Books.