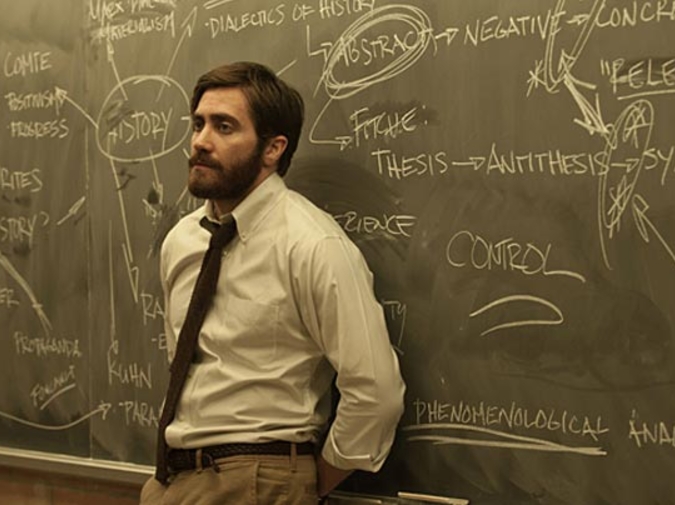 You can’t murder enough of yourself in love. Love expunges whoever you formerly were. We pedestal the object higher than we can scratch, up a nest no necessary flamethrower’s reaching, and trip over our scraps in portly self-defense. I don’t believe empathy. It allows for migratory fucking and blocks the obsession. It is both artless and is art as long as you decay. Let’s leave the rhetoric of the saved for those so vain they think they’re alive. Enemy is the only title a film about relationships should have. I’m ignorant of the book, but recall the adaptation of Blindness a few years ago. There was nothing bad to say, except the prose was better. Blindness, the movie, probably earns one of these handjob-over-the-pants reviews, popular in The New York Times, where no pyramid comes with lube, the critic as half-assed parent, shunning and rewarding simultaneously. Good thing they invented sleep. Many a great writer has been lazily spanked by that newspaper’s Lady Lib: I want the fucking torch. Take a Sagan-induced voyage with me (compare the writing line by line of the new Cosmos with the original, very sad drop off there, Sagan stabbed his goddamn finger to make a point, remember? Get your shit together new Cosmos – I bitch, but look at me: I don’t even care if there’s a sky) please indulge this impossible world, the Ionians beat out Plato’s cop loving garbage in this never-will-happen world, okay. Enemy would be what adults might go see if Jodorowsky’s Dune had been allowed to exist, then broken the box office, properly ranking Star Wars as minor and interesting, Kurosawa did it already, etc. Instead, culture’s a dumb joke so loud we can’t hear it anymore. We live in a world where the only heroes we deserve are in politics. I’m not complaining about having to hunt down Enemy in an art theater. Candy’s all the sweeter if you tie it to your shoe and chase. I don’t pine for human potential because when was it not just a sloshed glint anyway. Luckily, this is what a relationship drama should do. If you work on your work. It’s a cuddly arachnid Mobius, like arachnophobia in a hand gel, wife swapping in a spider’s perm. Dread is our single medium.