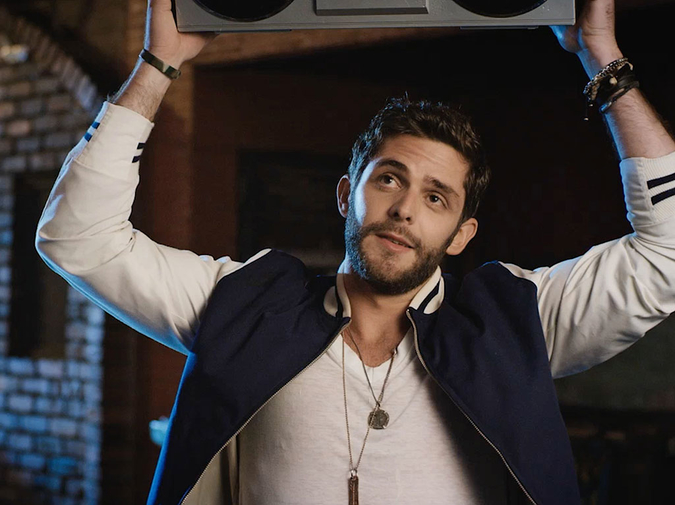 Earlier this month I drove to New Mexico with my family. There's a lot of Oklahoma and Texas between Kentucky and New Mexico, meaning there's a lot of driving time and a lot of country music to be listened to. We stopped in a boot shop in Amarillo and I bought a glittery shirt with a cow skull on it because of course I did. And in Oklahoma, our hotel room was right next to the pool and they blasted country music all day and night until the pool closed. It's like they knew my heart. We got Cracker Barrel and I listened to oldskool Taylor Swift. My heart is forever happiest down south, my ears are forever happiest when I am listening to these songs you probably (think you) hate.

“Strip It Down” by Luke Bryan

It's like a bro country Green Acres, except two couples swap places. City folks go to the country and country folks do it up big city style. The city guy works in a high rise, the country guy works on a farm. City guy—fancy luxury car. Country guy—big pickup truck. The city girl is in red heels, the country girl is in red cowboy boots. The city guy gives the country guy a tie. The country guy gives the city guy a big belt buckle. Everything is switcheroo magic. Meanwhile, Luke is red/black flannel-shirted in a barn playing a piano and singing about his feelings because that's what country music boys do. And in this song Luke sings feel my belt turn loose from these old blue jeans and it sounds like the dirtiest thing, coming from his mouth—fifty shades of country. Luke walks that line inbetween doing his booty-shaking and grinding on stage and also seeming like your “cool” youth pastor and that's not a knock. I love Luke Bryan and there's something about him that seems so genuine and sweet, I can't even picture him being fussy or rude with anyone. Luke's had a lot of tragedy in his life and he really does seem like a great dude, whether you like bro country or not. At the end of this video, the belt buckle comes off, the tie comes off too. These couples are going to have sex. That's what the song is for. You did it, Luke. You can go home now, just remember to leave the barn doors open when you leave.

“I'm To Blame” by Kip Moore

Kip and his buddies are fixing to be the wedding band but they don't want to wear the weird old blue tuxedoes so they snatch them off. Good thing, because Kip is wearing a John Cougar Mellencamp t-shirt underneath and now he feels comfortable. Everything's not fine. Kip needs to stop this wedding because the groom is only marrying the bride for her family's money and!and!and! he cheated on her the night before the wedding. Total dick move. And the bride's family supposedly has money, but they're not getting married in a very fancy place which makes me like the whole thing a bit more. Also, the band starts playing in the middle of the wedding and I'm no wedding planner, but I'm thinking that's a pretty big no-no. So anyway, Kip is going to use his wedding band lead singer status to get his point across. The first line is if it ain't broke, you can bet that I'm gon' break it and Kip sings it in his gritty country-rock voice that sounds like thick truck tires spinning gravel. I like how Kip isn't trying to use fancy language, he's not even trying to be romantic. He sings where there's blue lights, just read me my rights. Kip is pretty bold and straight up walks to the bride and takes her hand right in front of her man and starts dancing with her. Wedding over! Kip won! Girl, Kip wants you! But to be quite honest, there's a good chance he or you or both of y'all could get arrested on your way home because he's aggressively stubborn. I come from a long line, a bloodline that ain't gon' change. So you're just going to have to take your chances on him, but anything is better than the douchebag who's pretending to love you so you'll marry him. Kip is scrappy. In a bar fight, I want to be standing next to him because he looks like he'd be willing to fight dirty enough to get us both out of there if we're outnumbered. He sings where there's smoke, my pocket lighter sparked the fire and we could've guessed it because something about his mouth, his messy hair...he totally looks like the dude who always has a lighter in his pocket. You know, just in case. Kip is sexy and please don't ask me to tell you why because I cannot. He just seems like one of those dudes who would fight your asshole ex for you if you needed him to and that dude would never even think about bothering you again. At the end of the video, the girl leaves with Kip. She has her happy ending and Kip is to blame, absolutely.

“Break Up In A Small Town” by Sam Hunt

Sam Hunt makes emotional videos because we've already established that he's the Drake of bro country. Sam knows when that hotline bling, that could only mean one thing: he's emotional and he needs to talk. In his video for “Break Up In A Small Town,” Sam is burning it down, then he's running away in a tight white t-shirt. He's also sporting a new, thick beard and he's singing to his bathroom mirror reflection. He's upset. He's handsome. He's upset and handsome, he's handsome and upset. He's also running and running and running. He used to be a quarterback. He played college football. He's very good at running. His ex-girlfriend is dating a dude from the same small town. He never really thought about it before and his friends tried to hide it from him, but there she is. He can't escape so he burns it down and we never even see her face. Not much else happens here. We see Sam looking tired, angry, sad. We see his neck veins bulge out as he sings to himself, as he stands in front of a burning house. Sam sings I should've known all along you gotta move or move on when you break up in a small town. I love that at the beginning of the song he describes her car—in that white Maxima with the sticker on the back and he knows her mailbox is exactly seven minutes from his. So, nope. Sam is not getting over this girl as long as he lives in this town. Sam, you have to move! Sam, you are tenderhearted! At the end he stops running, he's out of breath, he bends over. Come on, Sam. Breathe, Sam. Breathe.

“Crash and Burn” by Thomas Rhett

I really love Thomas Rhett. He reminds me of my son. They have similarly-shaped faces and something about their eyes, so syrup-brown and sweet. So it goes without saying that I find Thomas Rhett to be very adorable and I love his songs and videos. His new Tangled Up album is my jam. Thomas starts out “Crash and Burn” by ghost riding the whip. Don't forget this is bro country and there are no rules—or at least, no one knows what the rules are. Thomas is in a letterman's jacket ghost riding the whip because his girl just broke up with him or at least, they had an argument and she made the decision to get out of the car. This song is very doo-wop-y and Thomas wears a lot of bracelets. Thomas also loves to dance. He dances in every video and I am blessed by Thomas Rhett dancing because it's unabashedly nerdy and fun. He's dancing because he loves to dance. Period. Like in his video for “Make Me Wanna” he dances and dances and dances and it's super-cute. He's not even like, trying to be a good dancer, he's just dancing. And that song is so good. It reminds me of George Michael or Lionel Richie or some other 80s radio song I would've loved when I was a kid just as much as I love now. This “Crash and Burn” video has a super-80s feel, too. He holds a boombox over his head to woo his girl back like Lloyd Dobler but uh oh she's throwing his shizz out of the apartment, so it must not be working. Thomas sings a slamming door and a lesson learned...I let another lover crash and burn.There are break dancers spinning on cardboard boxes in an alley. Here comes the girl again and Thomas gives it one more shot. It's raining. He's begging her, talking about his teardrops falling down. He's singing, he's dancing. He's kind of irresistible so how could she say no? Uh oh, she's saying no. She's gone. He's left alone. It crashed, it burned. But! We're left believing Thomas isn't too heartbroken to try again and he told us lesson learned and he wouldn't lie to us. In actual life, he's married to a woman he met when he was in the first grade and that's very sweet and cute so I trust him, I do.

Leesa Cross-Smith wrote a book called Every Kiss A War and she editsWhiskeyPaper and she loves One Direction and baseball.