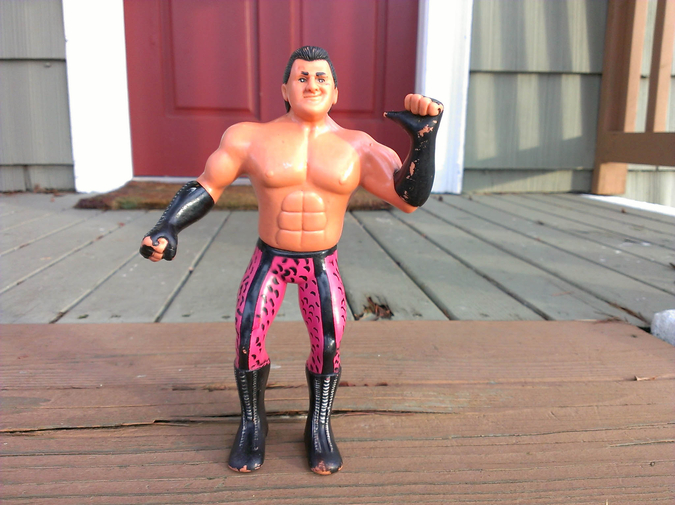 Lugging along next to me on the elliptical is an older gentleman – about the age my dad would have been – wearing two high-tech knee braces, fit with gears and everything, and what looks like an old-fashioned weight belt. He’s a regular at the fitness center, same as me. We’ve acknowledged each other on occasion and said a thing or two in the sauna, but never a real question-and-answer. I’ve always wondered about his knees.

He catches me staring and takes off his headphones. We greet each other. Then he says, “I remember being your age, when all the machinery still worked. Knee first started feeling wonky in ’89, up in Atlantic City. We were in town for the – ”

And so on. I try to pay attention to his story and keep eye contact but I can’t help glancing down at the black plastic surrounding his knees and the omelets of pink flesh jutting out from the padded holes above his kneecaps, which both look like they’re gasping for a last breath before being buried beneath science.

I exercise regularly. I’m vegetarian. I sleep well. What I’m saying is that I put serious, consistent effort into preventing my body from deteriorating as fast it seems to want. But I’ve come to realize that at some point it stops making a difference. The exercises that keep my heart healthy are probably the same ones that will jack up my knees, like the guy next to me. And I’ve passed the moment where the new cells my body produces are better than the old ones. Maybe I’m breaking even. Those kids zipping up and down the basketball court? They still have the good shit. My thumb’s plugging holes in a leaky dike.

And the old cyborg next to me? He’s trying not to drown.

I start paying attention again and, of all things, he’s talking about Junk Yard Dog, King Kong Bundy, and Hulk Hogan like they’re pals. I look closer and notice his starch-white thinning crew cut and tall, wide frame and realize that, at an earlier age, this guy’s skeleton could have carried some serious muscle.

I start gushing about how I was there in Philly in ’85 when him and Greg “The Hammer” Valentine formed the Dream Team and won the tag-team championship from U.S. Express, how I cherish the memories of his sleeper holds and flights off the top blocks. “My dad took me. That was our last trip together.”

“Those were the days,” he says, and we’re silent. Spinning wheels and electronic euro-pop soundtrack our nostalgia.

I can’t believe it: one of my childhood heroes. There was a time when his every pec and ab glistened from its own area code, a time when every artery and major capillary in his arms popped and pulsed on command. But to hear him now – once again holding forth about possible procedures like they are his next opponents in the ring – it reminds me of how my father talked about his descent, which was much too short and steep.

Near the end my father just gave up. I still think he could have made it through. Even then they were coming up with new drugs it seemed like every week. But sometimes that desire isn’t in a person.

I interrupt Ed Leslie and ask, “What keeps you going?”

It immediately feels like too big of a question, that I’ve gone too deep too fast, that this is too much for the fitness center, much less for someone I really just met, but then I realize that most people love sharing what keeps them going, because they have something substantial, something that means a lot to them. The question only feels like too much because of how my father answered it.

“Well, I had shoulder replacement surgery last year, which means that both my knees and now my right wing are space age – ”

From there, Ed Leslie keeps going, on and on, spelling out each spin of the downward spiral and every possible solution, and the hope it holds. Then he tells me about his family, and how much they mean to him, and how he wants to be able to play in the yard with his grandkids, or even great-grandchildren if he can hold out long enough.

It hurts to hear. I hustle beside him, fists clenched, checking the timer on the elliptical’s data screen and watching the little electronic blip going round and round and round this endless digital track, when in reality I’m still right here in the gym, not moving a single inch except the distance the clock carries me.

Ross McMeekin lives in Seattle, where he edits the literary journal Spartan and teaches creative writing. He received a MFA from Vermont College of Fine Arts. His fiction has appeared recently in publications such as Pank, FRiGG, and Necessary Fiction, and his essays have appeared in The Rumpus and Hunger Mountain. He blogs at www.rossmcmeekin.com.