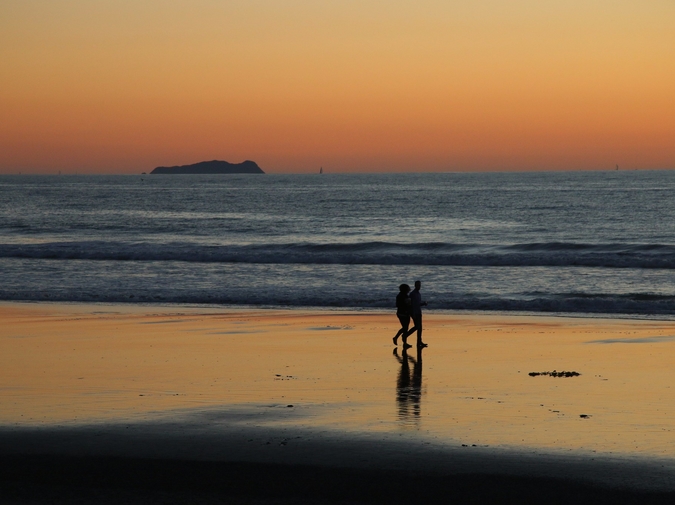 The seafood restaurant in my dreams closed down last night. I believe the pandemic was unrelated. When I pressed the owners for the reason, they cited operating costs and low patronage for the last year. I couldn’t blame them — the location of the restaurant, on the desolate stretch of Coronado’s Silver Strand and within my dreams, made it difficult for a lot of people to get to. To be clear, this was not the seafood restaurant of my dreams, which is a much grander affair. That location seems to be running smoothly, still serving expensive dishes like sepia a la plancha or Chilean Sea Bass with Rocket & Sun Choke, without losing much of its patronage. This restaurant was a much more down-to-earth operation, relying on a younger staff and seasonal favorites like California Spiny Lobster, spreads of Uni, and local beer specials to keep people coming back.

I was at the bar when the manager informed me. I hadn’t even ordered anything yet. In a show of solidarity, or maybe as a lark, the entire staff walked with their clothes still on into the reflecting pool near the restaurant’s entrance. I wanted to show my good faith to these people, and I walked in as well, followed by the only other patrons: a polyamorous couple and my maternal grandfather. Once up to our shoulders in cool water, our clothes darker and clingy, Kenny the bar back mumbled an introduction of the main investor for the restaurant. The investor stuck out in his blazer and oxfords, and began a speech about how proud he was of what they had accomplished. He was the CEO of a local biotech firm that scammed elderly people for DNA tests, so no one cared very much about what he had to say. Then there was applause across the water as he introduced the face of the restaurant, the general manager, a portly man in his forties with a pencil thin beard. He called out and gave praise to each of staff by name: the bartender Amy, who had been there the longest and baked the restaurant’s crostini by hand; Kenny, a quiet and gaunt man, had now removed his shirt in the water, revealing tattoos down his spine of clock faces on the vertebrae, each one displaying a different time. Next was Steven, the server who had joined them seven months prior (and eight months after his YouTube channel failed) - the previous server had been killed in a car crash. Lastly were the kitchen workers: Jesus, Allan, and Sophie, each of whom preferred to keep the details of their lives close to themselves. Tiny dots of light from the water reflected onto their tightly clasped hands. The limbs that broke the surface disrupted their shine, scattering them into the rise and fall of the current.

By now the polyamorous couple were sobbing softly, clearly moved by the manager’s commitment to his people and restaurant’s mission to feed the people within my dreams. My maternal grandfather said nothing, and I realized with embarrassment that he had never actually been there. Though I was a regular patron, I was not mentioned in any of the speeches. I was fine with it. This was their night, I thought, looking around, and trying to inject myself into the situation would have been crass. After the applause ended, everyone got out of the pool and the last of the taps were poured out for the staff. Sensing it was the right time, I left the staff to their clean-up and walked to my car.

It was only when I reached my car, slightly dusted with the sand blowing across the peninsula, when I realized I had taken off my shoes to get in the water and left them inside inside the green-carpeted foyer, filled with mismatched wooden furniture. I rushed back, struggling with the heavy glass and steel rotating door, a design holdover from when the building had been a small private airport. Unfortunately, I woke up before I could reach the restaurant’s interior. The shoes were a nicely worn pair of Clarks, which I will no doubt miss wearing when I return to my dreams. Whether one of the people from the restaurant will return them to me when I dream again remains to be seen. Although they are all very fine people, I’m not getting my hopes up.