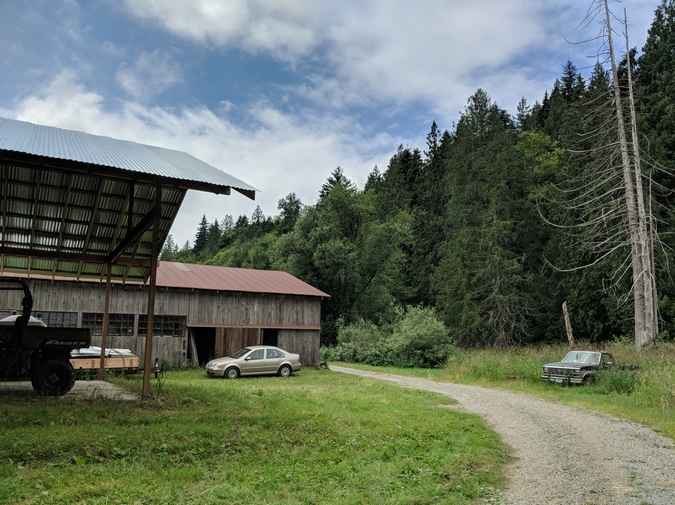 Last night my ex husband unpacked moving boxes in an old farmhouse while I greeted a repairmen who came by to fix a broken pipe in the cellar. As always, we were half moved in, half moved out.

What about this? He said, holding up an old spatula.

We made eye contact, and he knew, without me saying so, to place the utensil in a drawer by the wood stove. We worked together, in tandem, until I heard a stray dog bellowing in the snow-covered field and went to retrieve her—a Basset Hound named Fran. Fran looked lost and scared, in need of food and shelter, so I brought her inside. This is the kind of thing I did regularly in our marriage, and it always escalated into an argument. In 1995, our first year together, I showed up at the video store where he worked, my face full of tears, and an injured squirrel wrapped in my sweatshirt. All I could do for the animal was hold it while it died.

But this is a dream, and in the dream, my ex looks up, a dutch oven in his lap, and regards Fran and me with a sad smile. I meet his eyes for a moment and nod. We both know why Fran has to go elsewhere, and I know without him saying a word that he loves the way I love all things stray. We are working together to make a home, to fix a pipe. We have no time for spare dogs or petty arguments.

In the morning I wake alone on a queen bed at the La Quinta Inn, our twelve-year-old son on a sofa to my left, our nine-year-old daughter on a queen to my right, and a rescue terrier warming my feet. We are in Spokane for my daughter’s gymnastics meet. As I sip coffee and French braid her hair, covering it in glitter spray, I revisit my dream.

It is part of a pattern that’s recurred for years now: Always, I am navigating some half-abandoned landscape— part future, part past. Whenever I have a companion, it is my ex husband—the man who, after our divorce seven years ago, moved states away, leaving me to raise our kids mostly solo. On this particular morning, it finally occurs to me that these dreams may not be normal, and I wonder: Why am I still married in my dreams?

“Married” may not be the best description of my ex-husband’s presence, though I can think of no appropriate substitute. We were romantic partners in real life for sixteen years. Though I find him objectively handsome to this day, we are not lovers in my dreams. We never kiss or touch, nor do we argue. We aren’t enemies, but we aren’t mere friends either. We’re intrepid navigators. Apocalyptic house-wandering companions.

Last week, in my dream, we were back in Austin, the city where, in waking life, we lived for a decade, more or less. In the dream, we return for a visit, hanging with friends from our married days. We drive up north to a favorite Mexican restaurant. When it comes time to pay, I put in a twenty, to cover my portion of the tab. My ex shoots me the side-eye, as if to say, Why don’t you ever pick up the bill? I open my mouth to apologize, to try to explain that I have only $97 left in my account for the month, and that it is all I can do to pay my own way. But I don’t have to say anything because he catches my eye and understands. We carry on.

About recurring dreams, the internet tells me, Dreams repeats because you have not corrected the problem.

I’ve had recurring dreams three other times in my life. The first lasted a decade. In each version, I returned to my high school in the woods of Northern Michigan and searched anxiously for Green Lake and my favorite teacher. The dream ended when I returned to my alma mater in 2010 to teach for a semester and found the lake and my teacher both alive and well.

The second dream began after my brother killed himself in August of 2000. I dreamed we were back in the place I last saw him alive: our parents’ basement. A family gathering assembled upstairs. He wanted to join in, and every time I had to tell him, You can’t. You’re dead. It took two years, but eventually he, or I, got the message, and the dreams stopped.

When my brother died, my then-husband and I had just moved from his hometown of Missoula, Montana, to San Marcos, Texas. We had two dogs of our own, and I brought home the blue heeler my brother left behind without consulting my husband. Over the next decade, we lived with three large dogs, seeing each of them through their demise, until the week we decided to divorce, the same week the our remaining dog, by then fourteen, dragged herself to the back door and died.

Out of all the things we did well as married people, the domestic was not one of them. These mundane tasks made up 90% of our lives, especially after kids, which explains a lot. Our marriage came undone, one overdraft, lost leash, or flat tire at a time. It was never about the Feng Shui of the furniture arrangement, or calling out a right when I meant left, or choosing Watery Blue over Seaside Gray for the kitchen cabinets. It was the fatigue. Exhaustion. Feeling isolated and misunderstood.

Maybe it was a bad match from the get-go, but that’s not what my dreams suggest.

My subconscious gives me the best version of both of us. It is in answer, somehow, to my ex’s real-world request in our first year of divorce. He paused as we started to escalate into argument and said: What if, whenever we have a misunderstanding, we take deep breaths and imagine the other’s best possible motivation?

This good faith practice has been our saving grace, in our severance, and in my subconscious. The quiet comfort of his subliminal company relieves in some small way the daily overwhelm of raising two children mostly alone.

There is a third kind of recurring dream I have, still: the dreams from which I wake myself with paralytic screams, having lost one of our children. My ex is never in those dreams. In those I am always alone. Part of me knows, deep in my animal brain, that I am the only safety net in daily proximity for my kids. And a domestic dream cohort is no real-world safety net for me.

The dreams where we are together seem some kind of do-over for the past, or conflict/resolution therapy for the present. When the dreams stop recurring, maybe I’ll be able to move on, to find the kind of real-life partner who will be there through my sleeping and waking hours.

But when will I be done? Or, the more important question might be, do I want my dream husband to vanish, the way Green Lake vanished, my teacher, and then my brother? The healthy answer, of course, is yes. Our culture is adept at the art of intentional forgetting. We’re supposed to let go, to move on, to sign papers and extricate our exes from our lives with scalpels and sutures. But my subconscious resists, holding tight, perhaps, to vows no piece of paper can nullify.

In the meantime, these dreams are one place, at least, where love is not a zero sum game, where my once-husband and I co-exist still, working mindfully, tirelessly, to do better at the things that undid us.

Melissa Stephenson’s writing has appeared in publications such as The Washington Post, The Rumpus, Ms. Magazine, and Fourth Genre. Her memoir, Driven, released by Houghton Mifflin Harcourt in 2018, was longlisted for the Chautauqua Book Prize and selected for Target's Discover New Writers program. She lives in Missoula, Montana with her two kids.