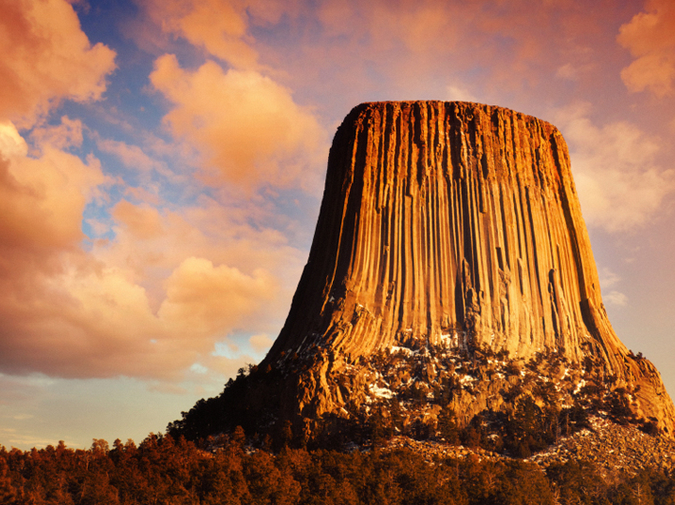 When I stay over at Amelia’s there is a poster of Devils Tower over her bed and we trace the volcanic neck with our fingertips instead of sleeping. I give Amelia a Xanax and floss between each of her teeth. We stay in bed all morning, smoking cigarettes and watching 70s game shows: Match Game ’74 and $10,000 Pyramid and Card Sharks. Amelia has a thing for Charles Nelson Reilly, even though he’s dead now and even though everyone born before 1970 knows he was gay. I say, That’s okay, I had a thing for Paul Lynde and Richard Dawson when I was little, and at least one of them was gay, too. But Amelia doesn’t know what I’m talking about. Amelia is at least ten years younger than I am, though we’ve never sat down and actually calculated the math.

There’s a picture of Stevie Nicks on the wall next to Devils Tower and Amelia insisted on cutting her hair like Stevie’s one night after doing a line after smoking a bong and now it’s this sort of uneven 70s shag, more Meryl Streep in Silkwood than Stevie circa the years she injected coke into her vagina and between her toes, but it suits her, even though she is having a harder time finding work now.

I’ve only known Amelia a couple of months but already it feels like that forever couple months like when you meet your best friend in college; like that time between classes beginning in August and Thanksgiving break.

There are so many things I don’t know (about Amelia) but the things I do know feel like the only things that matter.

Amelia isn’t dying in any conventional sense, like from cancer or an autoimmune disorder or anything. But she’s dying in the sense the Midwest is killing her - the men of the Midwest in particular. I want to drive her out west, the way my great-great grandfathers drove west, leaving behind their old lives, their first wives and first families. Amelia and I can be each other’s second families (out west). We can make new lives for ourselves; not panning for gold, but working regular jobs in show biz or, I don’t know, cleaning houses or something.

Amelia says, “We missed our exit.”

We are on the freeway. We are heading west rather than south. I am driving and my hand is between Amelia’s legs. Amelia is worried her thighs look fat spread out on the seat. I tell her not to worry. I stop and buy her a milkshake to prove my point. Later I buy her a bucket of chicken. I am happiest imagining Amelia’s thighs covering my entire face.

There are adult bookstores and fireworks and McDonald’s. I eat a fish sandwich and hold things for Amelia. There are no cup holders and Amelia’s thighs are cold from the Diet Coke. She says, “Here,” and I hold that, too.

I drive all night and pull the car to the side of the road and in the morning when we wake there is the outline of Devils Tower outside Amelia’s window. Amelia sits upright and says, “Wyoming!” and her thighs and her cheek have little indentations running up them from the seams of the seat.

I sit back and light a cigarette while Amelia traces the tower with her fingertip pressed to the glass. I watch as she stares wistfully through the window, like a close up in a movie. She says, “Only one percent of visitors to the tower climb the tower.”

I tell her the park rangers would prefer no one climbed it. I tell her preservation is preferable to conquering. Amelia looks wistful again. I remind her we don’t have the proper equipment and that neither of us knows shit about climbing. I tell her I thought it would be enough to stand in front of it with the other 99%.

I drive us closer to the tower. I look around for a place where I can buy Amelia a plate of sausage gravy, a Bloody Mary and a pack of 100’s, but there’s nothing but black hills and dirt, some prairie dogs and five dollar bags of peanuts.

We step out of the car. We walk around the front and sit on the hood. Amelia leans back and traces the tower with her fingers in the air.

This is all I can remember, and then we are walking toward the tower, and Amelia’s thighs look maybe a little bigger, like, just a little bit, like, perfect. And then we are climbing what used to be a volcano and what is now a sacred sight. Just a hand and a foot. We don’t get any higher than that. But Amelia seems happy. Amelia is satisfied. We are part of the one percent.

Elizabeth Ellen is the author of Person/a, Saul Stories, Fast Machine and Elizabeth Ellen. She once loved a person who loved Devils Tower. Somewhere in her super secret heart she still does.