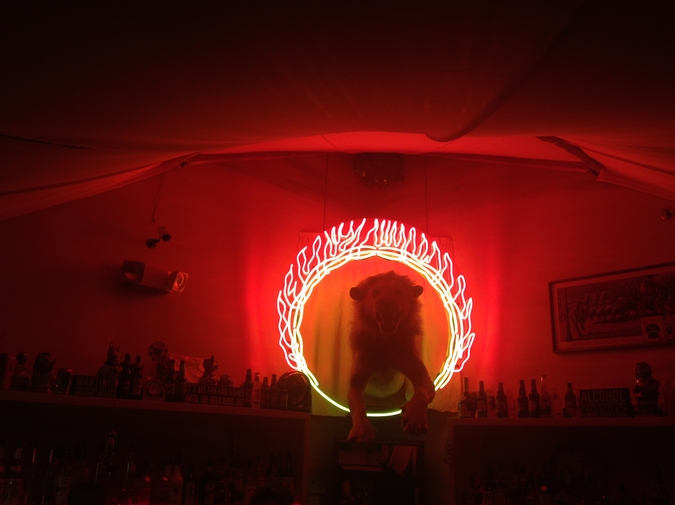 One night your boyfriend sleepwalks to the kitchen and brings a handful of M&Ms back to bed. You wake to bleary chocolate splotches on the sheets. You’re annoyed because they’re your nicest sheets. Your boyfriend says he’ll buy a replacement set with a similarly high thread count. This makes you feel better. It’s kind of cute, after all, that your boyfriend eats M&Ms in his sleep.

You wake to a new object each morning. A pine cone. A snow globe. A plastic lawn goose.

On the fifth night, something soft and warm tickles your calves. In your fumbling dream-state, you think it’s the black cat you had as a child. Her name was Midnight and she liked to hang out under the covers. You lift the sheet to pet Midnight, but the furry mass turns out to be the raccoon you’ve seen rooting through bins in the trash atrium. The raccoon bites your finger, then scurries into the closet.

While you wait in the emergency room for a tetanus shot, your boyfriend agrees to go to a sleep clinic.

The clinic is blue-walled, piped through with piano music. The doctor is a small, nervous man with white hair and wide dewy eyes. He asks your boyfriend pointed questions about his somnambulism, a fancy word for doing weird shit in your sleep. He prescribes your boyfriend drugs to deepen his slumber. You’re both in good spirits on the drive home. You hope the drugs will fix everything.

The next morning, the sleep clinic doctor is nestled in bed between you and your boyfriend, bound and gagged, his moist blue eyes blinking up at you. Your boyfriend must have sleepwalked to the car, sleep-driven to the doctor's house, and sleep-kidnapped the doctor. Presumably he first had to sleep-look-up the doctor's address.

On the seventh night, your boyfriend allows you to shackle him to the bed frame with handcuffs, but he winds up sleep-picking the lock with an unfolded paper clip like Linda Hamilton in Terminator 2. You wake to a brand new microwave. From the receipt taped to its side, you learn that your boyfriend sleep-drove to the 24 hour Walmart and sleep-chose the model of microwave that would best suit your needs. You’re still disturbed, but pleased that you now have an easy way to heat up Thai leftovers.

On the eighth morning, you wake hugging a famous urn from the Asian Art Museum. You’ve seen pictures of the urn on the sides of buses. You are worried about the criminal implications of a sleep-museum-burglary and suggest that your boyfriend sleep at his own tiny, windowless apartment until his somnambulism settles down. Your boyfriend admits that he started renting it out on Airbnb, since he’s always at your place anyway. A middle-aged German couple is presently staying there. Additional European couples have booked the apartment through July.

On the ninth morning, the bed appears empty. You and your boyfriend celebrate by heating frozen mini quiches in the new microwave. But when you make the bed you discover, tangled in the sheets, a highly venomous box jellyfish native to the tropical Indo-Pacific.

On the tenth morning, you wake to frantic nudges from your Great Aunt Renetta. You haven’t seen her in fifteen years. She is disoriented and upset. You take her to dim sum, show her your city, then buy her a plane ticket back to Pennsylvania.

Your boyfriend finally remembers to pick up his sleep prescription at Walgreens, but the drugs only make his nightly acquisitions more bizarre. An airplane flight recorder, battered and corroded by seawater. The slashed silver top worn by model Gisele Bündchen in Alexander McQueen’s groundbreaking Spring 1998 fashion show. Three passports of Americans born on August 18, 1973.

On the fourteenth morning, you wake to a wormhole squirming at the center of your mattress. Lord knows where your boyfriend sleep-acquired a hypothetical feature of space time, but there it is, a roiling purplish vortex the approximate diameter of a basketball. You climb out of bed, careful not to touch the wormhole's iridescent rim.

You and your boyfriend spend the rest of the day sealing the bed and its wormhole in a wooden box. While you build the box, you drop tools and planks of wood into the wormhole. You imagine these objects will pop out in a parallel universe and prove useful to parallel versions of yourselves. You imagine your parallel self is like you, but better. She probably bakes gluten-free pastries that taste just like the real thing. She probably makes her own dresses and has a killer record collection.

You consider jumping into the wormhole and emerging in a universe where your boyfriend doesn't bring terrifying things to bed in his sleep. But the parallel boyfriend might have some other, even more upsetting defect, such as snoring, so for now you stay where you are, in a sleeping bag on the floor, waiting for your boyfriend to sleep-ferry home another object that will make you shudder at the arcane puzzle of your own existence.

Kate Folk's fiction has appeared, or is forthcoming, in Colorado Review, Puerto del Sol, PANK, Wigleaf, the Tin House blog, and elsewhere. She holds an MFA from the University of San Francisco and is a 2014 fellow at the San Francisco Writers' Grotto. Visit her at www.katefolk.com.