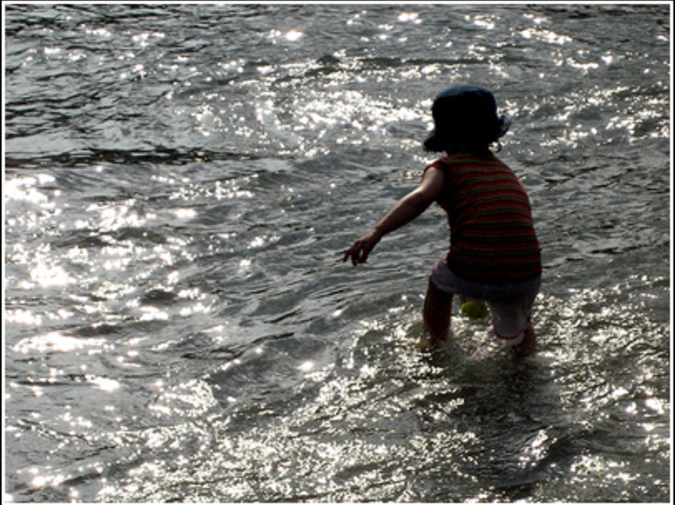 His name is David and he's in the hospital with a lot of things stuck in his arms, nodes pasted to his chest, tubes going into his nostrils and mouth. He has been staring at the TV for hours.

He looks at her. She is nineteen. She is in college. She is really his step-daughter, not his blood, but he married her mother when she was two years old. He is the only father she has ever known.

"I was never prepared for something like this," she says.

"I wish Mom was still alive," she says, "she would know what to do."

He wants to tell her that his dead wife, her dead mother, would not know what to do. She would cry, cry and pray to the baby Jesus. "Give me guidance, O Baby Jesus," she would say.

She has been up in Heaven with the baby Jesus for six years now.

He looks at her and tries to say something.

"That's a lie, I lied," she says, "I just wanted to see if you're paying attention, if you understand, if your mind is here with me, because all you do is stare at that stupid TV."

The color on the TV is too bright. It needs to be adjusted. He wishes he could tell her this, so she would get up and fix the TV. The color hurts his eyeballs.

"But if you die," she says, "I will get pregnant. I'll go out and get knocked up so you can have a body to reincarnate in," she says.

"I'm serious about this," she says.

"If you die," she says, "I'll have a baby and that baby will be you and we'll be together. I won't be alone. Then I'll have another baby, so Mom's soul can reincarnate in that one, and the three of us can be a family again."

"I feel better now," she says.

Michael Hemmingson's work has appeared in Fiction International, ZYZZYVA, Review of Contemporary Fiction, Panic Americana, Bare Bones, and many other places. His latest collection is How to Have an Affair and Other Instructions (Borgo Press). The Univ. of South Carolina Press will publish his study Understanding William T. Vollmann Fall 2008.