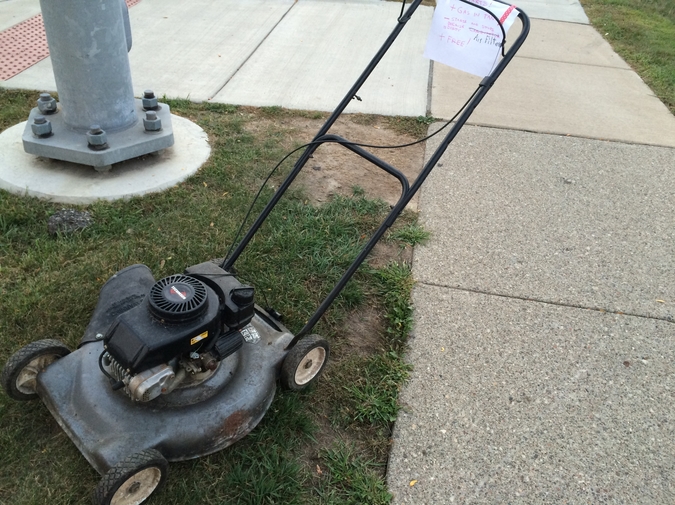 The guy at the lawn and garden shop tells you let go of the safety lever and the engine cuts off, because people walk away from a running mower and it ends up rolling over their foot.

He looks at your mom and nods, his arms folded across his chest. He looks at you and says it also stops you from reaching under it to grab a stick or something. People do that, too.

You grip the safety lever against the handle, stretch for the cord that will start the engine, and pull it.  Nothing happens. You pull it harder. The engine coughs, but doesn’t start. You can feel their four eyes on you. Your face is hot. You plant your feet firm against the ground, muster all the strength you have in your eighth-grade body, and yank the cord. Your shoulder twinges. The engine coughs twice and shudders to life. The machine vibrates hard enough for you to feel it all the way up to your elbows.

The guy yells over the grind of the engine that it’s gonna be loud like that since it’s older.

Gray smoke rolls out the muffler. You smell burning gas. You release the safety lever and the engine cuts off, exactly as the guy said it would.

Maybe you can do this. It’s not your idea. But maybe.

It cuts real good, the guy says as your mom digs in her purse.

The mower is too heavy. It’s too hard to turn corners around the cement walkways on the miniature golf course. It’s a side bagger when it needs to be a rear-bagger, so it’s too wide to get into some of the little nooks and turn-arounds. It eats too much gas. It’s loud. Like, really loud.

All this after a month of taking too long and doing too sloppy of a job.

Tears drag wet lines down your cheeks in bed every Saturday night after spending mornings and afternoons mowing the course. You can’t get faster. You can’t get better. You feel the owner’s voice rumbling so deep in your stomach that you can’t sleep.

Your parents: We paid for the mower. Faster and better is on you. Figure it out. Or the owner’s yelling will be the least of your problems.

All you have to do to get around the safety lever is tie it to the handle with a piece of rope. Now the engine only stops when you want it to.

You get a little faster. Not fast enough. And still no better, you’re reminded each week.

You tilt the mower back and pin the handle to the ground with a cinder block. The blade is a blur.  Chopping a hundred times a second. You feel the forced air pulsing against your palm. The blade scrapes your fingers the tiniest bit. Slow. A few millimeters more will be enough.

Jeff Burd spends a lot of time writing and thinking about writing, and worrying about not writing and thinking about writing. Some of his other flash pieces can be found at BULL: Men's Fiction, Soliloquy, KYSO: Flash!, and Flash: The International Magazine of Short-short Story Magazine. Burd is a Northwestern Wildcat through and through; in his spare time he works as a Reading Specialist at Zion-Benton Township High School in Zion, IL.