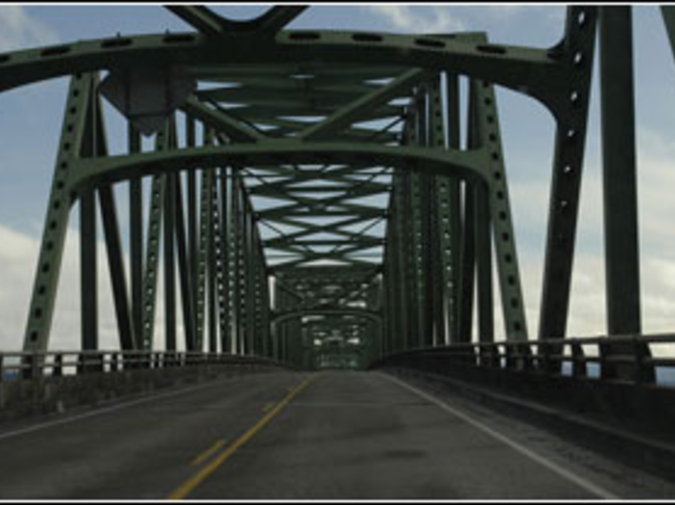 We ride the hook of route 87 straight from Utica to Newark without once stopping. The two of us go like vagabonds through tunnels and viaducts, me driving; my father in the passenger seat, slowly dying. New Jersey is all around us, snowy hills dotted with falling pines and the black afterbirth of car exhaust and ice splashed across the asphalt. Everything sounds in the winter, tires crunch and slide, passing cars sing with speed, the wind spits and moans.

I curl my fingers around the steering wheel; the radio shivers through frequencies. The Oranges pass, we are through Harrison next. These towns are artifacts, crude collections of concrete and steel put up by union men over a weekend in the 1950s. Things here are left to rot.

From a distance, Newark is a sad gathering of soulless brown buildings mulling together like members at an AA meeting. I see them circled around a table of Hydrox and fruit punch, name tags on all of them. My name is Verizon. My name is the Bank of America.

Dad hacks into his sleeve, pulls the afghan up over his shoulders. We cross a bridge into Newark, the mire of the Passaic River underneath us. The locals treat this river like my father treated his body, poison it and fill it with garbage.

We drive past a hollowed out section of road half a block long, construction workers in orange helmets coming in and out of it. It’s like some magnificent gash cutting the city apart. The workers like surgeons trying desperately to save it.

Dad was much the same three months ago. The doctors opened him up and said there was nothing they could do. His insides were ruined, crumpled buildings and muddy rivers underneath his skin. It was Milwaukee’s Best and Marlboro Lights, he said, Cutty Sark and those damn raspberry glazed from Krispy Kreme. These are what killed him. When she heard he was dying, my Aunt Beth sent him a copy of “The Five People You Meet in Heaven.” He used it as a beer coaster on Sundays when he watched the Bills.

“Left,” my father says. His thin finger taps the window.

I turn onto Mount Prospect Avenue. My father was born here in 1948. Back then, he told me, it was all Scotch and Irish. The blacks came later. Now, it’s the Hispanics. First a ghetto, then the projects, now a barrio.

Even though my windows are rolled, I can hear the pulse of reggaeton thumping from apartment windows and idling cars. A full bodied Spanish man stands outside the open door of a bodega, his arm firmly planted against the frame. He eyes me and I look away. The signs are all in Spanish, salida and caramelo and refresco.

“This one,” my father says.

I double park next to a red pick up truck in front of a five story tenement. The building looks tired, beaten on by nature. I think of the hundreds of people who have come in and out of it, put their weight and pain on the floorboards since my father had lived there. How he had been a post-war child as pure and hopeful as the world around him.

“That window,” dad says pointing upwards. I lean back in my seat trying to see, but I can’t. I don’t plan on getting out of the car. There are places like this in Utica. Streets you never drive down.

“Do you remember all this?” I ask him.

“I was a kid, you know?” He rubs his nose. “Everything looks gray now.”

There are two Hispanic youths on the steps of the building. They light up a cigarette, pass it back and forth.

“It’s nature,” my father says. “First, it’s the lions and tigers. They earn it, they wrestle it down. Then the hyenas come, looking for scraps. In the end, it’s just flies and maggots. Sucking the bones.”

We sit with that for a moment. My father still looking up at the building, me watching a dark-skinned woman push a stroller down the sidewalk, against the wind.

“Do you know what it’s like, waiting to die?”

I want to tell my father that this is all his fault. He could have stopped. We sent him to the meetings and support groups, but he never could quit. It was his weakness that killed him.

I put the car in gear and we ride on, the two of us leaving things behind.

Ryan Michael Murphy is an MFA student in the fiction program at The New School in New York City. His stories have appeared, or are forthcoming in, Pindeldyboz and Dirt Vol. 2.