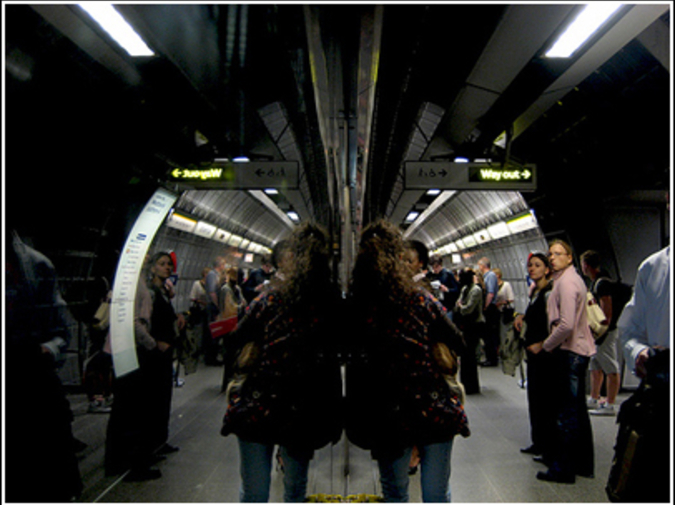 I met her on the corner of a street and an avenue. "We didn't fix anything," she told me. She was no-nonsense, a fast-walker, a liberal. She agreed to show me around.

I tried to ask what it was we didn't fix but businessmen kept offering us money, shoving it in our faces. "At least take some change!" they shouted. "Even change would help!" I accepted some, trying to be gracious.

Of course it didn't take those people long to realize I was from out of town. They started begging me for anecdotes to confirm their biases: "Do the women really sleep so long?" "Are the men as base as they say?" "Did you move here for our positive vibe and strong sense of community?"

We escaped the crowd by kicking them in the shins. Many of them were quite large and I feared the kicking might provoke them, but it only seemed to hurt their feelings. One of them murmured, "I'm not angry, just disappointed," as we crossed the street to take shelter in an enormous Art Deco skyscraper.

"Locals used to come here to elude tourists," she said, "but these days the only tourists are you." On the way inside, the security guard tried to give us hugs. She refused, but I didn't want to be rude. The burly man kissed me on the neck and ran his fingers through my hair before releasing me. "It's called personal space," she told him and kicked him in the shins.

Alone in the elevator, I considered kissing her. I wasn't sure what held me back. She told me of how she came to live in the city. Soon after graduating from college, she read an ad in the local newspaper: "Free city living!" She called the number and inquired, and found the landlord to be honest if a little needy. "She said the only string attached was that I have tea with her once a week but I stopped showing up to that ages ago and she hasn't kicked me out."

From the observation deck, I could barely make out the people on the street below. They looked so significant, walking, as if they had somewhere to go.

I told her about the wife and four daughters I had abandoned two days earlier. It was the noise that drove me off. I took one last look at my daughters and slipped out the back door.

"Listen," Lorrie interrupted, suddenly serious. "People come here to escape their problems but they don't escape for long. Eventually, the city folks' generosity breaks them down. They confess everything."

We left the building and wandered into a subway tunnel. It smelled fresh. I tried to stuff some of my newfound money into the already-overflowing donation box by the turnstile but she told me not to bother and pointed to a poster of the mayor saying, with a voice bubble, "New to the city? Then today's ride is on us!" The tunnel was nice and cool, and when an attendant offered me a martini while we waited, I accepted.

"What do you mean we didn't fix anything?" I said. "No poverty, no AIDS, no war, no crime, no shortage of free martinis. Life is fine. Sometimes it's even nice."

The subway car was half-full with businesswomen and men, all absorbed in books of poetry. Though there was room to spread out, they sat next to each other. There were four large subway maps in our car alone. We found two seats far away from the others and I told Lorrie I'd fallen in love with her.

One of the businesswomen heard me and her eyelids yanked back in her sockets. "You should marry her," the businesswoman said. "If you're in love with each other then you should get married!" The others looked up and nodded eagerly. "It's your decision, of course."

I was feeling that martini and got a bit swept up in the thing and got down on one knee.

"You did the right thing," a businessman told me. I thanked him.

I told her that my wallet only contained photos of my four children and that she was welcome to the small fortune that was spilling out of my pockets, but she insisted on the wallet. She did not have a weapon that I was aware of, but I was so shocked that I handed her my wallet without any fuss. The doors opened and she ran out of the subway car.

I walked out of the subway a couple of stops later and noticed a bulge in the seat of my pants. I found two fine leather wallets full of cash that businessmen had slipped into my back pockets. I hadn't felt a thing. Of course: neither had pictures of my daughters or the Velcro feature I enjoy so much.

I exited the subway station and I found myself in the center of a giant park. I sat on a bench and wept for my failed proposal. All I wanted was to be alone, but every passerby felt obligated to stop and comfort me. "Poor dear Charles," some of them said, though I don't know how they learned my name. "Sweet, sweet Charles." Soon, there were over a hundred people gathering to pat me on the shoulder, many of them crying themselves.

Gabe Durham lives in Northampton, MA. He recently released a fiction chapbook,The Complete Genealogy of Everyone, Ever. His writings have appeared at Daytrotter, NOÖ Journal, Word Riot, Meat for Tea and Expressionists. He gives away free words and music at www.gatherroundchildren.com.