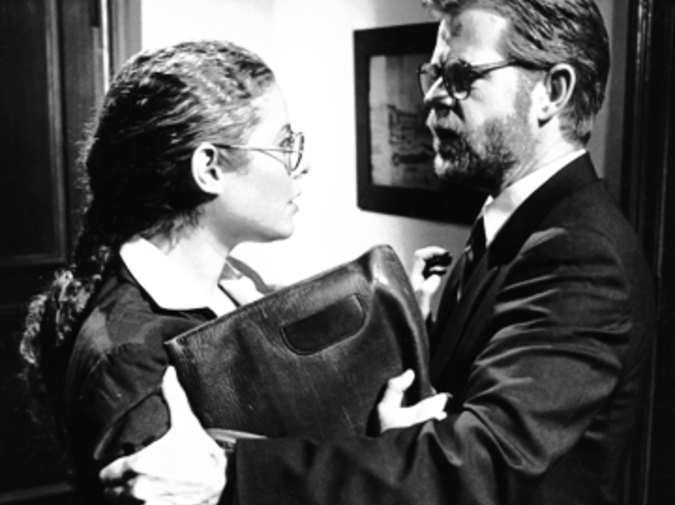 To be spurned and unrequited is to feel like you could level cities, but blackmailing a crush with genocide incarnate because she won’t reciprocate must mean men (we’re surely merely lads if you know us a minute) are innate rape demons, a flatteringly typical accusation society now punishes for the first time ever, I'm told (so proud for the internet’s feeble, man-bunned help on that, thanks), with the cute bipolar mixed message of most any equally demonic female. If Nacho Vigalondo’s Colossal stuck to a man vs woman Oleanna theme laid ingeniously over the kaiju genre, because we’re both, in our reluctant categories, fulltime monsters, Jason Sudeikis’s superb and unexpected performance as, not only a straight up villain, but a representation of the apparent fact that men are all kiddie cowards, nags, or tyrannically calculating rapists (and women are superheroes, not that that’s a compliment), would still be entirely excellent with me, because I care not for fellow danglers, refuse to support pants or skirt, and am no longer pedestaling pigtails, specific or otherwise, nigh the mush between anyone’s shorts. We’re all the same villain birth made us. I have no interest in entering an opening for any biological imperative or vice versa. Even the term asexual abuses too much sex. I wouldn’t stir my own pudding if you paid me. Spend your college fund molding a nectarous figurine from the latex furthest back in my abscessed memory and I would present it with a middle finger. I’m an older millennial, so I lead a much more enriched eunuchdom. A film is unhindered by its bias for the protagonist, even if that bias plays to the suspect timeliness of political redress (who would dare complain aloud to his desolate boxers of such a shame?), neither on these clingy merits alone (don’t dote on your lovers too much, Mr. Vigalondo, they’ll grow to resent you, then you’ll need more than just a random city to explode – also to nitpick the psychopathic male’s edicts: you only snap at her if she fucks your friend after she has fucked you first and you caught her pretending to care, if she hasn’t fucked you at all your anger should remain a private issue, unless excessive teasing transpires, and it hasn’t in this case, but that would make the film less about good versus evil, if she acted like she was into both Sudeikis and his pal because she’s bored and playing with people’s affections for sinister and opportunistic pathological reasons, instead of just innocent drunk fun, because Sudeikis’s retaliation would, in this scenario, be a relatively linear blowback, but I suppose moral ambiguity is too divisive for a crowd), nor because the main theme of man vs woman becomes secondary to alcoholism. Addiction takes priority, takes and takes it, begins the goals of every person, looms inescapable across all subjects. Sudeikis’s character doesn’t need a reason, bent or not, to escalate his villainy, because the characters are drunks. His mania makes sense after that many beers. Saying I will kill you, me, and burn the world down around our remains would better complement the human condition if we didn’t so often waste this sentiment on superficial provocations. It’s a film in which there’s nothing to want more from, even if you think so, because delivery surpasses material. Denis Leary took the style from Bill Hicks and left the message behind. He got away with it because swagger will always embarrass sanctimony, thank Marduk (who totally rules). Thievery is not afoot per se, but this is mainstream, edgy Spielberg. There being a theme at all puts it far above most money. Nacho Vigalondo helmed the masterpiece Timecrimes and tis clear to me that were he shipwrecked on an island he’d assemble several high concept masterpieces from the debris. Whoever’s busiest counting their come stands to auction off the lion’s share of it. Which is why destructive dependencies provide such an equitable splurging of self.