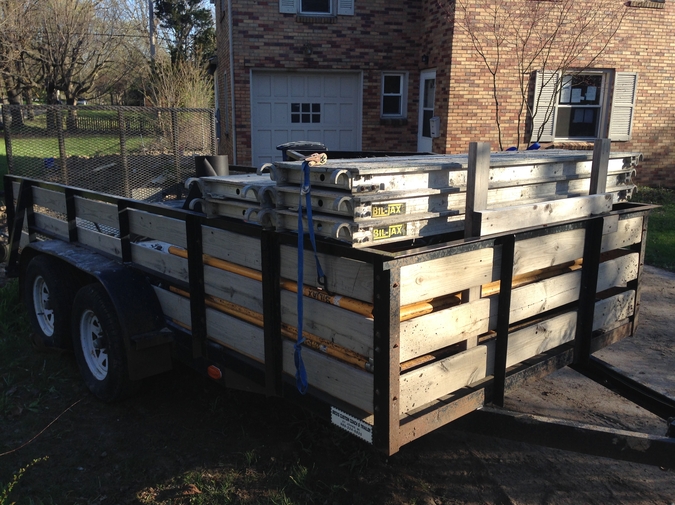 On the side of the house, where the living room’s picture window once let in so much light, and above, where my sister slept, there is no longer a house. The roof, ceiling, walls, and floor of her room have collapsed, pulling the outside wall down with them. The house now stands exposed, revealing the interiors of the living room, my parents’ and brother’s bedroom, and the staircase to the second floor, which now leads to empty air.

The backdoor hangs on a single hinge. Windows gawk like open mouths with jagged teeth. I HAD SEX IN HERE, someone has scrawled across the dining room wall, below the counter where my mother once horded bills, report cards, recipes and receipts.

The water-heater rests halfway up the flooded basement’s stairs, half-submerged, too much work for those who came to claim it.

“Can you believe we used to live here?” Austin asks. I shake my head, realizing I literally can’t, that this house I called home for a decade—the longest tenure in my life—has been emptied of all resonance.

Austin is my half-brother, but sometimes—in mannerisms, in tone of voice or laughter—he’s more like my mirror. We are often mistaken for one another. We navigate the world in similar ways—cautiously hopeful, with care, but sometimes masking a caustic pessimism we rarely admit to anyone except each other. Our bond is bolstered by our shared love of certain novels and films and musicians. But it is also bolstered by the peculiar way big questions nag at us, how God, life, and purpose feel so irrevocably tangled, sometimes enthralling, sometimes absurd, sometimes debilitating.

We were on our way to weatherproof our mother’s current home, a little old farmhouse in the middle of cornfields, when he asked if I wanted to swing by the old house. The detour took us through the ghost town of Modoc, past dusty empty storefronts that once held restaurants, churches, boutiques, all blurring on the way to this place that we once called home.

The real reason for this visit to my mother is that my biological father, a man I barely knew, has died. The phone call just a few days prior, after his sister had called my mother and she in turn called me, did not suffice. She must see me, given that all I keep telling her over the phone is I feel nothing. Under the pretense of repairing things, I go to prove I am not broken.

But the house detains us. I tell Austin I can’t imagine how this happened, but that’s not entirely true. I know how it started, at least. The leak in the roof was minor. It began months, years, before we noticed. Trapped, no light or air, the wood beneath decayed. The rot spread through struts and trusses above my sister’s room. Rain and snow fell, settling, soaking into ceiling joists, battens, bulk insulation. A cross-shaped stain formed on the spackled ceiling over her bed, expanding until it ripped, pouring water onto her. She woke, crying, shivering. My stepfather pushed her bed away from the leak and set a bucket underneath. My parents had already lost their jobs by then—when Ford, in the midst of the housing crisis, relocated their factory to Mexico—and we were kicked out shortly after. The house has been vacant since. There was no longer anyone to listen for the sound of dripping water, to keep it from soaking into the hardwood floors my stepfather spent a summer sanding and refinishing, to attend to the myriad interruptions in the ordered functioning of the house.

I think I know how the rest of the story goes. Months turned to years. One night, maybe during an especially heavy thunderstorm, the beams meant to bear the roof aloft snapped, falling into the room where my sister had slept. This could’ve been the end, but the floor of this room, already soaked through with rainwater, collapsed too. When the floor caved in it dragged the roof, three of its four walls, and all its history with it. The outside wall fell, a tear down the side of the house that pulled the living room wall and the picture window down too, all falling onto the off-white carpet my mother took such pains to keep us from wearing our shoes upon. Since then, nature and vandals have conspired in finishing the house’s slow but inevitable ending.

I want to see it the way it was, to bring back the house that once felt like a seam in the frayed fabric of life. It was here. Somewhere. I just can’t find it anymore.

Leaning over the car, arms folded across the hood, Austin says, “It’s the cemetery of our past selves.”

“Yes.” I say, turning to him, seeing myself there, looking back, gauging me, trying to register what this is like, to lose one’s father. “That’s exactly right.” I say this even as my mind immediately shifts, bites back at the idea. I realize I hate this image he has offered. Another year has passed. My father is dead at 50 years old. Father. I feel like a liar even writing that word. There is something about metaphors, these entrancing sleights of hand, that feels not magical anymore, but false, violent even. The house is not a cemetery. The house is not even a house. It has stepped out of the story it was made for, stepped out of any future story I can imagine. What looms before us exists beyond or even despite language, meaningful to no one. If I really want to call it something, Nothing seems the best description for what is left, what we have, the only thing it can ever be.

But I don’t tell him this.

Justin Chandler is a writer, editor, and PhD candidate in English Literature. He lives in Cincinnati, Ohio.