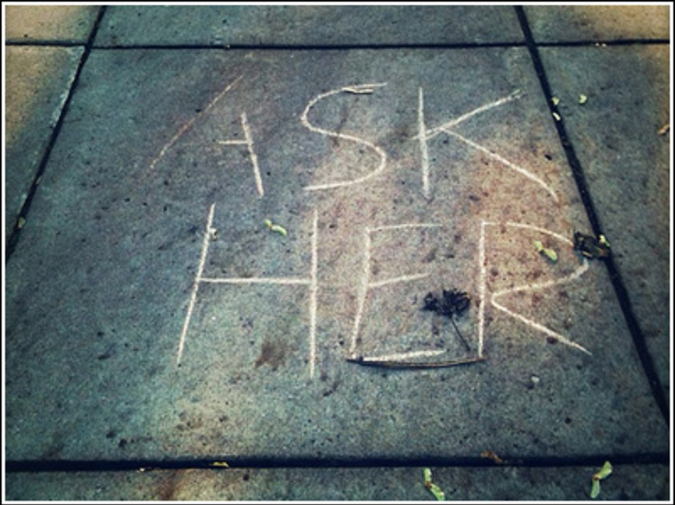 Take it from inside you and draw it out. Do it before it decides you are not what you seem to be and, as a result, holds you up by the thumbs. You are picking up that teacup, I see you. You are taking the hot water like a rolling meadow. You always do that.

Tuesday, before we do the four things, we should do the following four things, preferably in the morning: wash the remaining dishes, slow dance to the record I found upstairs between the dresser and the wall (Daily Bread by The Anna Stillwater Trio), write the letters, and memorize one page of the dictionary. Then we can say the words and the things they mean when there is quiet, after a woman coughs on the bus or when some person whose name you don't remember tries to shake your hand.

Whenever you complain, I only hear you saying how the Lost Thought is making your head sag. I've lost an earring. My car didn't start this morning. The cost of living rises at a higher rate than most wage increases allow for. Once I went skinny dipping into a neighbor's pool, it was great, I was so cold. I lied before about the Lost Thought holding you up by the thumbs. But you know what I mean. You know all about it. I saw the way your eyes flicker sideways. The look of disquiet is subtle.

The first thing on Tuesday is the library. The books came in but it's not open on Mondays. And we were invited to a celebration of a new book written by a librarian. We were invited separately but maybe we can go together. It will probably be something like most celebrations these days, holding a wine glass at its base with two fingers while you balance a little plate and a stale sandwich with the other fingers of the same hand. We will have books to carry. I will not read the librarian's book. I don't even know him. Isn't it amazing that the whole library, full of people, will have no idea about your sagging head?

The second thing is to visit Amanda. She is expecting me. I told her you would be coming. We will not stay long. She dislikes company. You know Amanda. She rattles the raw spaghetti in its box as she takes it out of the cabinet. When we were kids, we used to swing on the playground and try to kick each others shins. Now she is a dental hygienist. Her mouth is impeccable. I need to drop off the twenty-pound bags of concrete that are in the trunk of my car. She is a cement artist when she is not cleaning mouths, and I owe it to her to keep her supply adequate. She made those two sculptures outside: the sapling and the miniature goat. I hate them both but she is someone who needs such activities.

Amanda surely had a Lost Thought and now look at her. She used to be so angry. She used to be so proud and happy about it. Now, she is ruled by the upkeep of enamel. There is great honor in working with someone's mouth, but not for a person who, at one time, slapped a clerk at a doughnut shop. Her palm slammed his jaw, and sent a loose crown flying across the tiled floor. It landed by the glazed and sprinkled case. That clerk would be horrified to know that the woman responsible for his re-broken tooth is now so serene that she hands out free toothbrushes and mini tubes of toothpaste to every ten-year-old who comes through the office. This is what an unchecked Lost Thought can do. It can bleed away the very essence of whatever you consider to be the contaminant of your personality, the poison that keeps you from that lobotomized state known in many circles as 'perfectly content'.

Amanda's house will not take long, but the visit will no doubt last until the screening of Wildebeest, The Sixty-Five Year Old Man on a Poor Diet. It is a student film. You said you were interested. Remember? It's true, you said, that's exactly what they look like. We walked past the flier last week. I pointed out the splotchy photo of the animal and said how it would go nicely on a t-shirt.

You said, Oh, it's a movie. I never notice things in their greater environment. I see things only in pieces. Let's go see it, you said.

I've never gone to a movie with you before. Maybe I shouldn't have said that. Maybe we should just pretend we've gone to many movies together. The film runs close to three hours, but it is our third thing and we both agreed to do these things together this week. Let's try it, you said, I like you, and we could go on thinking this is how people do it. I don't think this is how people do it, but this is what makes me want to do it even more.

You called me contrary. I am contrary. I tried to think of a reason for my contrariness and, at the time, I gave you one, but it wasn't true. I have no real reason. When things go one way, I want to go another. People love each other like they do, and I want to love you some other kind. But maybe we should just go to the movie first.

It will be late and the students will be in their rooms. The fourth thing could be a walk through the tired grounds of the campus. I promise. I promise not to bring up your Lost Thought there. I can see your eyes. They are telling me to drop it. On the walk, we can skirt the pond because I know you don't like live water.

I can't drop it. You need to take this more seriously. You might live off ignoring it, but sooner or later every decision you make will be shaped by the Lost Thought. Look at Amanda. Look at her teeth. You don't get teeth like that from standing up for yourself. What's worse is that what you are not standing up to isn't a bully or group of friends or some authority. It is a thing, a lost thought, a notion, a feeling, a mind-trend and it is only nibbling at you now but soon it will rob you of your hypocrisy and that's all we have, isn't it? Dostoevsky had it right. We choose what we choose because we are able to. And what will you do when you become Amanda? When the sad thing is not that you lost your choice, but that you no longer desire one?

Hand me your cup. I'll wash it. I rush when I'm at the sink. I think of too many things when the water is on and the soap is dripping. In a million years, do you think everything will be all right? The last time I felt all right I was looking at a photograph of a tiny baby elephant. It looked slimy and new. I don't know if it was alive but it rested in someone's open palm and the first thing I thought about was how small the mouse would have to be to get that elephant to love.

Brian Mihok's work has appeared or is forthcoming in Johnny America (print), Invisible Ear, and Seeing Other People. He co-edits matchbook, a journal of indeterminate prose (matchbooklitmag.com).