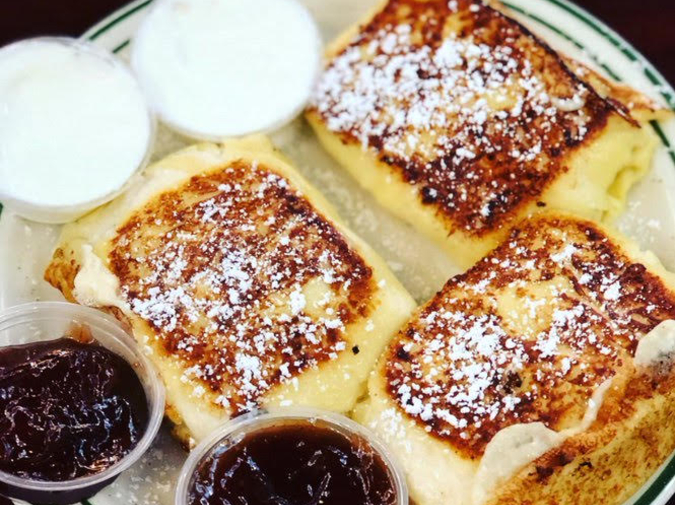 Were this place to close, or burn, or fall, in an earthquake, down.
Were it to flood or be bulldozed to make way for the gray &
unmusical slab of an apartment building. Were it to be carried
away in a river unleashed by an unstable climate, or bombed
by the frightened white men who are, despite what they tell us,
the bombers of things in this country, were it to be engulfed
in a tornado or battered by super accurate asteroids—I would

go with it. Were it to be eaten into the earth, I would go with it.
The last breakfast my father ate, he ate here, with me, amongst
the rattling of silverware & plates being loaded by bussers into
bins. Amid the shouting of servers who have served here since
the seventies, the kibitzing of old men with hearing aids nestled
into hairy ears like eggs humming in pigeons’ nests. Amongst
the slicing of pastrami, pearlescent with fat—pastrami that,

as dear Will said when I brought him here, weeps. It weeps,
I know, for us. It weeps for what it does to our hearts, the tender
smotherings of a mother who must protect her fragile children
from the grievous whims of a God who chooses a people by
touching them with a finger of pure density. Yes, my father ate his
last breakfast here, with me & his discontinuing heart. We spoke,
laughed, chewed bagels; onion for him, with lox, cream cheese,

tomato, capers, cucumber. For me, ever the purist, pumpernickel
with sable, cream cheese, & red onion—tomato’s frantic acid
overwhelms the poor lox’s placidity, I remind him, but old habits
die hard—about as hard as he wants that bagel—toasted nearly
black, so bits of char collect with each bite in his mustache. Here
I can speak of him only in the present tense. Here, where we speak
of mothers—his mother, mine—who brought me first to this place

when I was too young to appreciate what it meant, the direct line
it made into a history I am desperate, now, to claim (though so
little record has been kept). My mother took me here & she said
try the Black Pastrami Reuben, try the Mushroom Barley Soup,
the Cheese Blintzes, the Kishka, the Black & White Cookie.
My mother who knows me better than I do, my mother who
is not, like me, familiar with the concept of enough—& now

I bring friends, I bring women I wish to lie with awhile, kissing
their shoulders & eyebrows, whispering How good were those reubens?
I’ve come here alone—to celebrate, to mourn. Brent’s spreads
at Yom Kippur break fasts, funeral services—when my father dies
we fill the kitchen with smoked fish, & even my mother arrives,
& others who are here out of love or obligation or the promise
of free food. Oh, were this palace to disappear, I could write

no elegy. How to sing the way the blintz breaks open like a tablet
with a cloud inside it, the way the cloud fills the mouth & empties
the mind. Were this place to go, how could I stay? But why bother
worrying about it? Still, customers spill from the door in sandals,
suspenders, visors, into the Northridge sun. No nostalgia—heaven
is still here. O slicer slicing meat for sandwiches, o bagels & bustle,
& my father waving me over to join him, there in our usual booth.

Jeremy Radin is a writer, actor, and teacher. His poems have appeared (or are forthcoming) in Ploughshares, The Colorado Review, Gulf Coast, Hunger Mountain, The Journal, MUZZLE, Passages North, Wildness, and elsewhere. He is the author of two collections of poetry, Slow Dance with Sasquatch (Write Bloody Publishing, 2012) and Dear Sal (not a cult press, 2017). He lives in Los Angeles where he once sat next to Carly Rae Jepsen in a restaurant. Follow him on Instagram @jeremy_radin and Twitter @germyradin