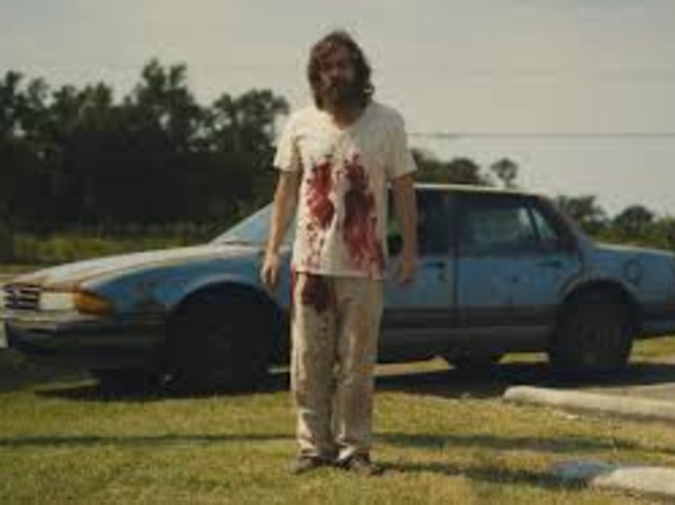 I inhabited a square-foot ghetto in Austin, cute by standards of being raised south of 8 mile, upside Detroit’s unfair putty. Big Texas roaches I never met before. So thick they do pageantry entering the room where you sleep. You have to clean up after they go bathroom. I would knife the smaller body from its exoskeleton and get refused donating sperm. (Too much Raid in me.) Once I probed through the murk to our abused, multi-shared toilet and a rat landed on my shoulder, tittering bubonic gossip over my preserves. Not enough went wrong to enforce this memoir (I did find church: I Luv Video), but I believe in revenge. By that, so far, I mean writing. Unmarketably boring, growing up, I focused on movies, not the street, though I was occasionally kicked into a malfunctioning bladder, so I check out easy. I did, however, subject someone innocent to my affections. That’s pretty mean-spirited. That’s why my favorite revenge film is Red White & Blue. It takes omnipresent revenge. It revenges existence. There isn’t a brick in America that wasn’t paved for reprisal. Besides Noah Taylor’s ransacking Kinski-level species, wholesale AIDs for men, the little band boy spreading out his ma, there is a perfectly felt violence to the characters relentlessly swallowing their architecture. Some films reach moments of natural intensity, takes that could never be recaptured, prime epitomes of editing or performance as stampede. The original Texas Chainsaw has an unparalleled borderline snuff dinner like this. Rumley is an artist who applies the bottom. He’s warped the genre’s underwear. The topic supports a spectrum. Fat Girl shows its revenge in one sentence. By the Sword is the most underappreciated and the only unapologetically optimistic film I know cornering the eye for an eye. This categorically riveting masterpiece (about fucking fencing) makes a therapeutic sport of revenge, is the closest I’ll browse to cheering for human endurance and forgiveness, etc. because the writing is that tight and that ignored. I know it sounds silly, but the formula as practiced here has some kind of meth in it for me. It belongs with the classics and hasn’t even hit DVD. Finally, the million dollar idea of Blue Ruin removes the badass element. I am one minor event away from living this man’s life and I might just do it anyway. The acumen of the film is that a lot of people are, these days, this close to murder.