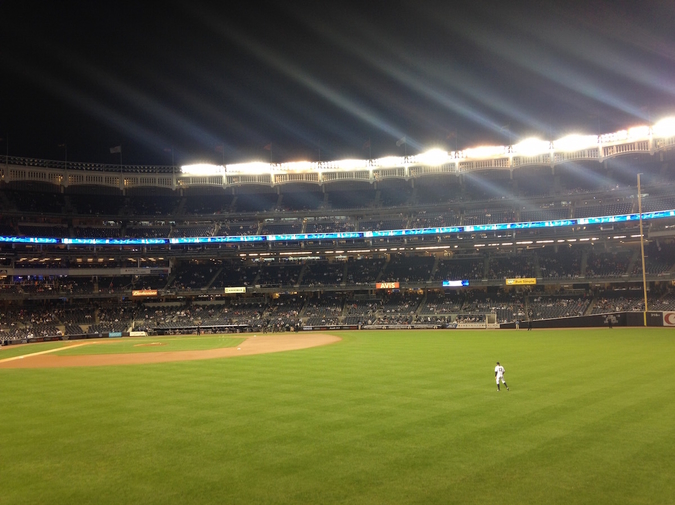 Baseball is the reason we met in
Florida: my brother from Connecticut
to see his son from Ohio pitch, me
from Oklahoma to see my nephew
play, Eddie from New York, Eric,
Donna, Michelle, Sharon, Artie,
Cadwallader, nine of us, enough to
field our own team, all brought together
after years, even decades, by baseball.
Baseball is a Game 7 postponement
of everything except birth and death.
How can this boy born yesterday be
a man at nineteen and take the mound,
alone, with only a Kenyon “16” and
eight other boys to cover him? I see
what I missed: my brother teaching
him to smooth neatsfoot oil on his
first mitt, to band it and place it
underneath his pillow; the imaginary
cheer that came during a delay—the
applause of rain, the first sweet dream.
As I watch him warm up, I am already
making excuses to never have a catch
with him. Baseball is, if nothing else,
a reason, and so it is everything:
a reason to sit in the sun, to sip a cold
beer, to eat peanuts and Cracker Jack.
It is a reason to unite or, in our case, to
reunite. It is a reason to gather together,
to assemble in a holy cathedral or on a
dusty sandlot. Baseball is tradition. It
straightens a tie on the starched collar,
makes a treasure of the ticket stub, caps
the hair of the hippie. Baseball can be
nontraditional, evoking superstitions
in the scientist, the spiritual in the
religious, and even allow the blind to
see the spin of stitches on cowhide.
It is the cool mist of oxygen to the dry
lung, the reason calloused fists dab
at the eye, why old men pray for one
more season rather than one more year.
It is a reason to remember even when
you want nothing more than to forget.
Whenever I see a boy in a baseball
uniform, I think of Alan Cseh dressed
like a Cleveland Indian in his casket,
just days after chasing a foul ball
onto Union Boulevard, struck down
in a blind spot, immortalized north of
Cooperstown at the age of fourteen, five
years younger than my favorite player.

Jennifer Didik has held various positions in publishing over the last decade. A contributor to coverspy.com, she is on Twitter (@jendidik), Tumblr (jenhedonia.tumblr.com) and Instagram (@jenhedonia). Raised in Central Jersey, she now lives in Brooklyn.