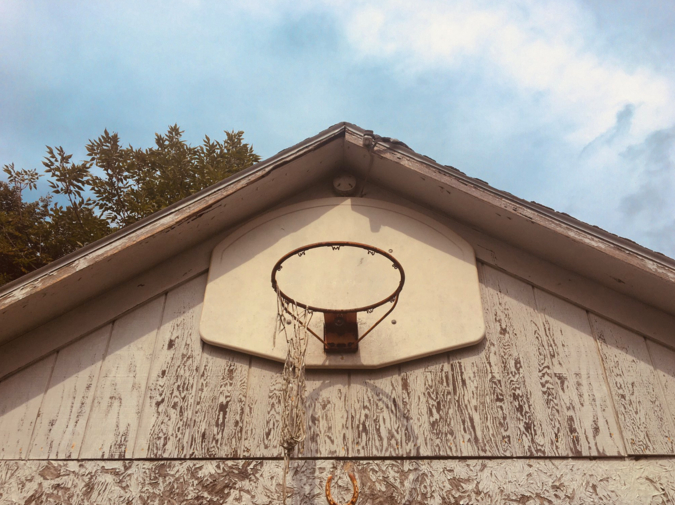 When we were kids, my sister kicked this boy. After our older brother’s high school basketball game, I was on the court shooting around, just chucking up bricks with two hands. I wasn’t strong enough to do it the right way. Though that didn’t matter to me. The ball was no different than an extra birthday balloon that no one had claimed, so I claimed it. I kept it in the air. And it was fun until I apparently stood in little Johnny Bucktooth’s sweet spot.

He launched a shot, bumping into me. Skin rippled under my shirt. I was a fat kid. It was meant to hurt me, and it did. Like I hit the corner of a table. I took up too much space.

I didn’t know his real name, this rodent, this great-grandchild of the American Greaser Experiment. He must have been from the other school. I had nothing to say, anyway. Like everything else in my fat little life, I was going to eat the insult. Choke it down. But then: Blaire, my baby sister who our family did their best to teach to count to ten, she saw the whole thing. Then she saw red.

She set her ball on the ground next to the bleachers. She walked from the other side of the gym, across half-court— over the big painted head of a Lenape chief the school has since covered in a PR move. Then up to Johnny Bucktooth.

She kicked the boy.

She drove the bottom of her foot into his knee, and he crumpled to the ground with the slapping sound of a wet bag of garbage.

He cried. He called her a bitch. He might have torn a ligament. Or it could have just been bruised. He cried, though, that was certain. And I cried, too, because our family was like that. Fighting meant crying. Laughing meant crying. Bunch of cryers.

Blaire was crying, but I couldn’t tell why for sure.

Nobody saw what she’d done. Everyone was too busy hugging their little all-star, consoling them over the fresh loss to a crosstown rival they’d forget about in three hours, while Johnny was still on the ground, rolling over and out of breath, all of his blood in his cheeks.

I took Blaire under my arm. Never turning around, we moved into the crowd of parents and grandparents snapping up their coats and wrapping their scarves. We found our mom, followed her out of the gym like bank robbers, and got into her car. When she got the engine started, we kept quiet. We didn’t mention the back vents blasting cold air onto us. I dodged her in the rear view and listened as she told our brother he had nothing to be ashamed of. Blaire hummed to herself and put stickers on the cover of a notebook in the dark.

“You guys warm enough back there?”

It was a Friday night. We went for pizza to cheer my brother up. We sat at the table with our hands in our laps when the waitress, who went to school with our brother, asked how the team played. He gave her the bad news, and with a smile, she said they’d get them next time. She was pretty. She smelled like garlic and deodorant. And when she left to get us silverware, Mom insisted that our brother ask her to prom. He threw a coughing fit until we talked about something else. That was his personal brand of not doing something he didn’t want to do. When she returned, the waitress asked me and Blaire if we wanted bendy straws for our 7 Ups, and we said yes please. She told our mom we were the politest kids she’d ever seen and Mom blushed.

I asked to be excused for a moment, and when I got into the bathroom, I exorcised a nervous liquid shit. I fought myself for what felt like a half hour. At my last appointment, the doctor said I either had terrible anxiety or was allergic to yellow dye #5 and that we’d “check in” next time, after completed bloodwork.

I flushed the guilt down.

Back at the table, the food had come, and with a knife in her hand pointed up, Blaire led us in an improvised grace that ended in, “Bless this cheese.”

A murderous display. Sauce covered our faces and we picked chicken from our teeth. I got cheese fries and a sugar high with a subsequent soda headache. The waitress brought out take-home boxes we didn’t need and commended all the clean plates. Our brother hid his face behind a drink menu, hacking his coal miner lungs.

That night I laid sick on the bottom bunk and stared at the plywood slats underneath the mattress above me. They formed a spinning criss-cross pattern around my head until Blaire stopped snoring and climbed down at sunrise to watch cartoons.

For a week, I went to school expecting the principal to call me into his office to apologize to a sobbing woman whose little boy now had to walk on a wooden leg. I let it eat me for a few weeks more until I had to tell Blaire on the bus ride home one day. She laughed and said she forgot that happened. I figured that was the last time we’d ever talk about it, but she brought it up once more years later at our grandma’s funeral, tears in her eyes from laughing still. “Remember that kid with the teeth?” she said. “Ah, god. Fuck him.”

I’ve since wondered what would have happened if we’d been older, playing pool at a bar when Johnny Bucktooth said something about my ex-wife instead of my baby fat. It’s mostly the same every time, with minor variations. First my sister overhears the insult. Then she lunges. Sometimes there’s a broken bottle at his throat. Sometimes it’s a cue she’s snapped in half and put through his stomach. But I let myself get carried away. Depending who you ask, I’ve lost it. If you ask me, I’m long gone.

She has kids now, my sister. Three boys of her own, all named after obscure characters in the bible — people who were small pieces of the greater lessons of the lord’s teachings. When she got married, she became a hipster for God.

We don’t see each other much anymore, just the big holidays and our parents’ anniversary. So it’s nice to be sitting on our mom’s porch, getting drunk in the same wicker chairs we used to push together to form a Viking ship for a game Blaire called “Burn the Village.”

When she asks me how I’m doing, I tell her about my most recent bad date and not the dreams I still have about burying bodies with her. Or the one where we killed our uncle with his own truck. I definitely don’t tell her I have the same dream on a continuum that picks up where it left off every year sometime around my birthday, where we’re throwing basketballs at an unmoving person tied to a chair— their face pulped beyond recognition. I instead laugh about getting stood up for coffee at Dunkin Donuts, and she laughs too, and says love is probably not worth it. She tells me ever since she and her husband Ryan got side-swiped and she was the first one out of the car screaming at the driver, pushing the man across the sternum with one hand and pointing with the other, she keeps a wrench in her bedroom. She says Ryan started sleeping on the couch — he tells her it’s better for his neck — but the wrench is migrating ever closer to landing beneath the pillow.

Growing up, a lot of people thought Blaire was older than me. Now she even looks the part. A beaded tear forms in the wrinkled corner of her eye and she dabs it away with her thumb like it’s a bug. She says that if I need a place to crash, we can talk later. I cry, too. My sister the inferno is desperate enough to think I can protect her from the loneliness that already owns my debts.

But it’s Easter right now, so we cheer for my waist-high nephews as our brother teaches them the art of the free throw on the driveway hoop.

I’m older, too. Things have gone different than I planned. I’m skinnier for the wrong reasons. I’ve thought better of having kids of my own, and I try not to worry about who’s going to take care of me when I get old or sick or both. I’ll be glad if I make it that far, and for now, I’m alright. I have people that take care of me in their own way. I live with my best friend — a metalhead with a tattoo of a crow on his throat. He’s got an expunged record and a good heart, and if something was to go wrong — I mean really wrong — he knows he’d be the second person I call.

They’re about to start the egg hunt, and I’m a few deep, feeling loose, so I run as far back as I can in the driveway and tell my nephews to pass me the rock. From the porch, Blaire yells she’ll give me five bucks if I can even hit the rim from back here. My oldest nephew Zachariah pushes a slow dribbler over to me, but I tell him, “Nice pass, big guy” anyway.

The ball is so worn it's hard to grip. Loose threading sticks out between the cracks of its torn rubber. I tell Blaire she’s got herself a deal and square up toward the hoop. With my non-beer arm, I catapult the ball into the sky. I get dizzy watching it spin in the blue.

Matt Boyarsky is from Montdale, Pennsylvania. He recently completed an MFA at Miami University, and his stories have been in Hobart, X-R-A-Y, and BULL.