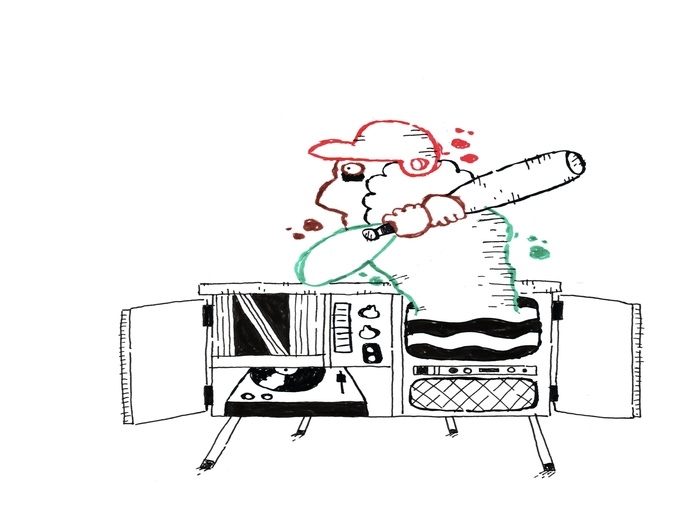 In 1949 we had viewed television for three years on a 12” screen. It inhabited a large wooden box with doors that pulled out and covered the picture tube when not in use. For the most part in those days, people hid 78 rpm record players, radios and TVs in what looked like furniture.

We had three stations coming out of New York City, which was 42 miles away from our Connecticut home. The antenna was described with the affectionate term, rabbit ears. We would adjust them every day since the reception was iffy and was effected by the weather, time of day and maybe aliens from another planet.

Tin foil was added to the ears and could improve the quality of the images. And sometimes one of us would be the best improvement of all, holding on to one ear and stretching out our other arm. This latter move was not popular with the current volunteer as it usually meant that you couldn’t see the picture.

Along with the very old movies, news and early entertainment shows, NBC carried baseball games. I watched everything. Fuzzy, grey images didn’t deter me. I was an early addict.

The local Police Athletic League (PAL) offered a summer course in gun safety and lessons in shooting a rifle. When PAL announced a field trip to a Yankee game, I didn’t hesitate to sign up. I was a Brooklyn Dodger fan but a Yankee game will do. On the TV screen all appeared in various shades of grey. There was no true black and white. Following the ball when it was in motion was challenging. I could see the start of an action and the finish. The camera work was primitive.

The big day arrived and we loaded onto the bus. We babbled and squealed our way to the game. The bus parked in the huge lot. People were streaming into the stadium and we swam upstream with the rest of them. We entered a large grey concrete tunnel that was ramped upward. It matched the colors of the TV screen. Grey and more grey.

And then, the tunnel opened up.

The lush green smacked me right between my eyeballs and straight into my solar-plexus. Gorgeous green. Then the colors of the players. The colors of the fans. The red dirt. And that green, that glorious green.

I stood there slack jawed.

I don’t know how I found my way to a seat nor who the Yankees were playing. It didn’t matter to me. The visual feast was more than enough.

Susan Parker was born in 1939 just outside of New York City and grew up in Connecticut in an artists’ family. She moved to California in 1956 and has been an oboe player, pot thrower, graphic artist, and even courageously tried her hand as a musical theatre performer. To pay the rent she has worked as a motel maid, semi-conductor distribution coordinator in the greater Los Angeles area, and various other disparate endeavors. In 2019 she took a creative writing class for older adults, and now at 82, is attempting to write and even complete a memoir. She can be reached at spark@mcn.org.