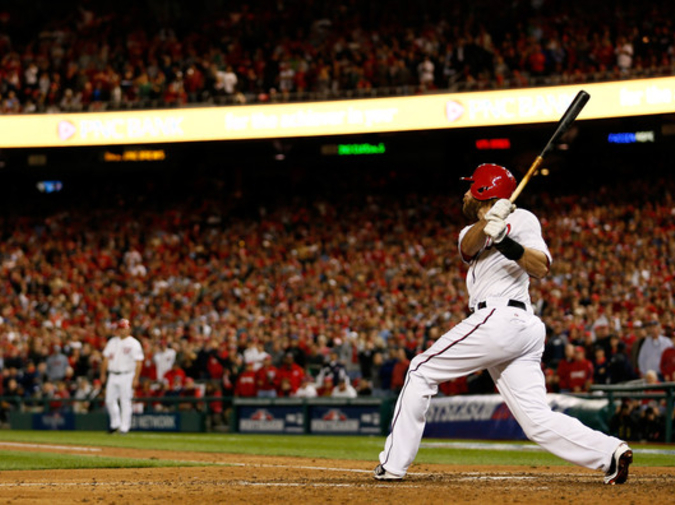 Number 28 slams the butt of his bat to the ground and the 24-ounce weight slides off. From under his red batting helmet the right fielder is all shaggy, shoulder-length locks and facial hair. A fan in centerfield waves a sign with his nickname THE BEARD printed in big block letters. This, right here, is what Number 28 has been dreaming of every night since he can remember. Game four of the National League Division Series is tied one to one in the bottom of the ninth. He is the first guy up. The bullpen's arms are dead so he can't let this game slip away into extra innings. Lose and his teammates back there leaning against the dugout railing, hope still in their eyes, pack up their bags and fly home to Nevada or Ohio or wherever it is they live in the off season, and they don't come back until spring training. Some of them might never come back.

Number 28 taps the bat on the inside of each cleat and adjusts the Velcro of his white batting gloves. He is more careful with the left hand. Though his doctors have said the break is fully healed, his wrist hasn't felt the same since the diving catch he made four months ago that put him on the bench for half the season. He puts a hand on the top of his helmet before digging into the batter’s box. He stares down the Pitcher, a tall hook of a righty with a 98mph fastball. When he pulls the bat back behind his right ear, the roar of all 44,000 fans in attendance fades away. He cannot hear a thing. All Number 28 has to do is get on base. A walk, a single to left or a big knock over the centerfield wall, it does not matter. Baseball is a simple game. See the ball. Hit the ball. Become a hero.

Number 28 eyes two screaming fastballs right into the catcher’s mitt and already it is an 0-2 count. The pitch speed, 94mph, flashes on the jumbo scoreboard out in right field.

Coco cannot believe it. She turns to her husband Robbie, puts her left hand over her wrinkled eyes and says, “I can’t watch. I might throw up,” not because she has had too much to drink, but because she is nervous. She cares too much. They are standing in front of their seats in section 217, one level up, between first and home plate. They are both decked out in the home team’s gear, red sweatshirts and baseball caps with curly W’s on the front. Empty plastic cups that used to contain beer are littered at their feet. They each have an earbud in one ear, the long white cords coming together around a small radio in their clasped hands. Though it is a crisp October evening, the tips of Robbie's fingers feel sweaty between Coco's knuckles.

Coco has watched every home game with her husband from these seats since the ballpark opened in 2008 while listening to the game play by play on 106.7 FM. She has endured horrible seasons, but 2009 when her beloved team lost 108 games, and 2010 when they lost 93 more, are distant memories. Now she feels like a winner. This is the playoffs. After marriage, and kids, and grandkids, after retirement and their dream trip to Dubrovnik, this is what she has been hoping for. It is the last of her major life events. Something to retell at family dinners. Remember the World Series of 2012?

Well, they've got to get there first.

The fans around them start chanting Beard! Beard! Beard! It is a far cry from the hate fans spewed just last year when Number 28 arrived in the District and went through a dismal batting slump. On more than one occasion both Coco and Robbie had screamed a profanity or two down at the field when Number 28 struck out looking. Now the fans are so loud Coco can barely hear Robbie when he moves her hand from her face and says, “Its ok. The Rookie is up next.”

Coco rolls her eyes at the prospect. This is not a time for sarcasm.

Number 28 sits on pitch number three, a 81mph curveball that misses down and away, slipping from the catcher's mitt and bouncing against the backstop with a thud. He spits on another junk pitch for ball two. He steps out of the box, takes in a deep breath and adjusts the Velcro of his batting gloves again. He takes two big practice swings before stepping back in. Ok Righty. You’re missing with that curve, aren’t ya? I’m gettin’ straight heat. He taps home plate with the end of his bat and then swings it back. The Pitcher cocks his leg up, hiding the red bird printed on his jersey, and then lunges forward unleashing a fastball on the inside, at Number 28’s fists. He swings and the ball ricochets off the inner half of his bat, a twinge of pain radiating in his left wrist as the ball loops back into the crowd behind home plate.

Number 28 steps out of the box.

"You got this," the 19-year-old Rookie in the on-deck circle yells as he takes a practice swing. Though the sun has long since set behind the stadium on the third base side The Rookie is still wearing red contacts to fight off glare. So far in the playoffs he is 1 for 18. He is due for a hit, but nerves have clearly gotten the better of him. Behind The Rookie in the hole is the third baseman. He is the face of the franchise, the only starting player that has been with the team since their first season in DC. Franchise has a boyish charm, a round face and goofy eyes but lately this twenty-six year old star has has begun to show his age, needing three cortisone shots in his right shoulder over the course of the season, and regularly missing routine throws from third to first.

Number 28 nods at The Rookie, and eyes Franchise who is rubbing the shoulder of his throwing arm. It's all an awful lot of pressure. 28 adjusts the Velcro of his batting gloves. 28 puts a hand on top of his helmet when he digs in. He reminds himself to just get on base. He remembers how simple it is.

Number 28 pops up a pitch that lands in the dug-out just four feet to the right of Franchise.  The Bench Coach puts a cleat up onto the top step of the dugout and says, “This is getting interesting,” before spitting used tobacco on the cement floor. The whole bench begins to chatter, recalling a game in Miami from the regular season. After waiting out a two-hour rain delay where they were down by one run, Number 28 came up to the plate in the ninth. He fouled off at least five pitches before knocking a game tying solo shot into the Fish’s bullpen.

“He has a knack for doing it, doesn’t he?” Coach says just as Number 28 barely gets a piece of a low breaking ball.

Number 28 looks up at the pitch count on the jumbotron. Ten pitches? Is that right? The pitcher runs his fingers along the bill of his baseball cap then stares into home plate for the catcher's call. Number 28 points the end of his bat to the visitor's bullpen then pulls it back behind his right ear where it circles in anticipation for the next pitch.  Ok Righty, I can foul these suckers off all night long. The ball is hurled from the pitcher’s mound, a fastball down the middle. Number 28 begins to swing, but something's not right. The ball begins to drop, and just at the last second 28 catches a flash of the red stitches rotating downward. He holds up his swing, and the 79mph breaking ball hooks down and away, crossing the plate just on the outside corner and landing in the catcher’s mitt with a thwack. Number 28 knows instantly that the call could go either way. If it's a ball he's still alive; strike and it's up to The Rookie and Franchise to win this game. He waits for a called strike that never comes, and holds his breath as the visiting team appeals to the first base ump whose arms spread wide for the call.

He did not swing.

Number 28 exhales when he steps out of the box. He is still alive. For the first time since walking up to the plate he is aware of the roar of the stadium, fans waiting to explode, waiting for the win. He adjusts his gloves for what feels like the hundredth time.

“Then we go home,” Robbie says, “And we come back next year.”

“But what if we suck next year?”

“We will not suck. And anyway, how about a little optimism. We are going to win this game,” Robbie says as Number 28 fouls off the twelfth pitch. The ball travels fifty feet in the air, and is almost eye level with the press box where the radio play-by-play broadcasters are calling the game.

"Remember the at-bat after the rain delay Dave?" Charlie asks into the microphone. He has a round nose and a receding hairline, and his eyes are set entirely too far apart.

"Remember what happened culminating that at-bat?"

"Wouldn't that be nice?” Charlie asks.

"I hope you’re The Summoner."

"I hope I can steal a little summoning from you, Dave."

The Pitcher throws his thirteenth pitch, a 96mph mistake. A ball that fast takes only a few fractions of a second to travel the sixty feet, six inches from the rubber of the pitcher’s mound to home plate. The batter has even less time to decide if it is a pitch worth swinging at. This pitch is a no-brainer right down the middle of the plate. The knock of the wooden bat on the ball is unmistakable, like the sound of a cork from a Champagne bottle; that kind of pop only means one thing. The moment the ball explodes off Number 28’s bat Charlie and Dave are on their feet. The ball flies over the infield and at 60 feet in the air glimpses the white dome of the Capital Building a mile beyond the outfield.

"The ball is going, going," and before Charlie finishes the sentence, the ear buds fall from Coco’s ear. She waves both hands in the air and the small radio falls to the ground and lands in an empty beer cup. Number 28 is already at first base pointing at Franchise who is leading the charge out of the dugout, when the ball lands in the visitor’s bullpen some 406 feet from home plate. Right now it does not matter what happens tomorrow, or the next day, or even if they make it to the pennant. Tonight Number 28 did his job.

Baseball is a simple game.

Susan Hope Lanier earned her MFA in writing from Columbia College in 2012, and now lives, writes and photographs in Chicago, IL. Her work has appeared in The Spoiler's Hand,Hairtrigger, Annalemma, and in collaboration with Yes Press Books. Her debut short story collection, The Game We Play, is forthcoming in September 2014 with Curbside Splendor. For more information please visit susanhopelanier.com.