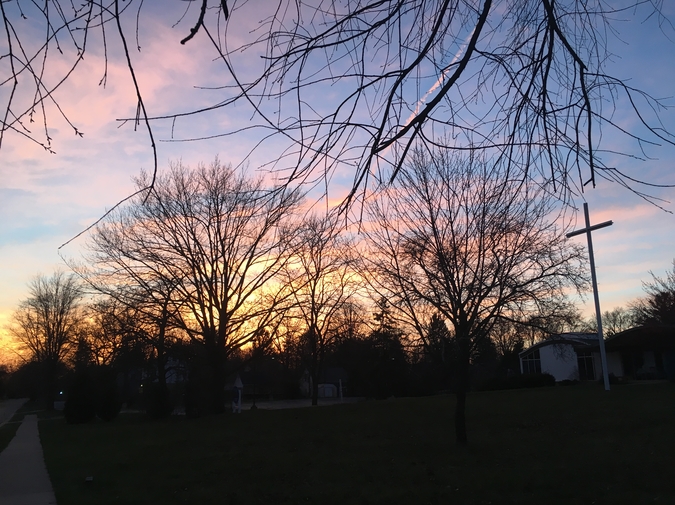 There was a Help Wanted sign at the florists. I had a car, so I walked in and applied. This was a time in my life when I’d decided anyone could do anything. In other words, I was an artist. I had no “experience” but who becomes a professional flower deliverer? Although deconstructing Dutch still life flowers had been an assignment in my MFA from our teacher who looked like a monk and drank like one too.

In that era, there were maps. Even to this day I can refold a map with authority, though I couldn’t have predicted how useless a skill set that would become. The shop was large, cold and empty, awaiting Valentine’s Day, June weddings and death. In the back room leaves lay scattered all over the concrete floor, like a destructive baby had trawled a garden.

Doris the owner worked at a long metal table back there, between big white plastic tubs of fisted ferns and damp babies’ breath. Doris was short, tough, with three piercings in one ear and  none in the other. Her head was outsized, like a warthog’s, under a bandy-legged sailor’s body. She near slapped the teleflora sanctioned bouquets into shape, loudly addressing the silent, tall, sandy-haired man next to her covering Styrofoam orbs in gold spray paint. That was her husband. He was like a sous chef for flowers. She always made the same joke, that I should be the one to spray the orbs since I was an artist. She found that a most hilarious profession.

Everyone smoked, while they listened to barely audible top forty and expertly jabbed stems into the pin, frog or foam. They’d put a card in the forked pick, ribbon up the cellophane nice and tight, and load everything into the back of my Dodge. One day there was an identical Doris waiting outside the shop when I arrived. Also smoking. Also wearing a stained sweatshirt with the arms cut off.

She left and I stood there as Doris attached a huge funeral spray to a wooden stand that looked like an easel. “My sister,” she said, by way of explanation. She stood with her hands on her hips, checking the symmetry of the carnations that formed a cross. “You know what she was, right?” she put down her cigarette and slicked her finger over a drooping rose. “Anyone can tell, right?” Her husband worked silently. “A nun! What a cliché. And now she quit and what the hell is she qualified for now?”

They let me go a few weeks later so I guess that was the answer. Odd jobs. That’s the old term for them. And yet the memory comes back so powerfully, barreling down the highway, smoke clinging to my hair, surrounded by flowers, as if I was traveling everywhere in a field that moved.

Merridawn Duckler is a writer from Portland, Oregon and the author of INTERSTATE, dancing girl press and IDIOM winner of the Washburn Prize. Recent flash in museum of americana, Pithead Chapel, Queen Mob’s Tea House, FRiGG. She’s an editor at Narrative and the international philosophy journal Evental Aesthetics.