Another Old Man at the Bridge 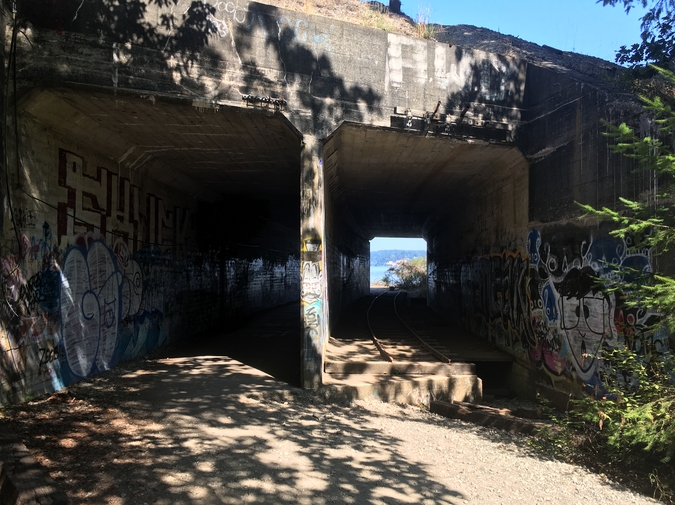 Nothing happens to the old man at the bridge in Hemingway’s story, and yet so much happens, because we, as readers, are asked to imagine all the awful things that have already happened, or that will soon happen, in a region called Ebro Delta and in a town called San Carlos where the old man comes from and clearly wants to return to at the story’s end.

What we imagine on the other side of the bridge is Fascism. What we imagine is a small town ruined by the tragedy and hot masculinity of war. What we imagine is the way that an old man’s simple desire to take care of his animals on his land and live a quiet war-free life has now been all but destroyed by other men, who are soldiers and revolutionaries and reporters and farmers and also other old men who want to change their country into something great.

Just like my body after I pushed a seven-pound baby out of it one day in October. The whole world ran asunder with the imminence of that revolution. There was my body, that old man at the bridge, who used to have such a calm existence; one might even romanticize his simple life, the way that he would—say—stay out drinking at the gay Karaoke bar until 2 a.m. and then sleep in and wake up near lunchtime and eat bacon with a roommate who had a body like a small town farmer in the Catalonian region of Spain before the dictatorship, and the two of them would watch an 80s movie on the couch and maybe take a nap and maybe get it in them to drive down to the biker bar by the river and eat fried vegetables and drink piss beer and talk about whose mother was more self-deluded.

But that old man, who was my body, was fleeing Franco’s soldiers because life was no longer like it used to be, because men who had planes, real planes filled with bombs, would fly in one day or night soon and dropped loads of said bombs upon that man’s town, killing anyone left there, and rendering that town—which was also kind of my body if only because it’s an extension of the old man who is my body—a holy land of revolutionary change and shifting allegiances so that after the seven-pound baby came out, I became a site of literary and artistic reverence. I was, in fact, a symbol of sacrifice and loss. I had been destroyed but I also felt good about the fact that something significant had finally happened to me, and that my body that was a town, and also an old man fleeing that town, had finally done something meaningful, even if, as a writer, I am—admittedly—also Hemingway, which is to say I am that soldier at the bridge talking briefly with the old man, which is to say my body, about the meaninglessness of loss.

When the man sits down and can go no more, that is me, nursing, alone a night, days after the birth, realizing that the world has somehow prepared me for this cycle of destruction followed by life followed by exhaustion and more life and also maybe its end. My nursing is the feeling that there is something beautiful, if tragic, about being a man giving into certain destruction simply because there are some animals in my house that I feel loyal to, even though Franco’s troops are closing in, even though to stay here thinking about those animals means I will die. That old man sitting there talking about his animals is me alone in a room late at night smelling the head of my four-day-old baby and thinking how it smells exactly like Thanksgiving—mashed potatoes and gravy, milk and meat—and knowing that those smells mean I will never cross that bridge either. Because I, too, have a wild loyalty now that is more important than the life instinct telling me to avoid the incoming warplanes, the starlit bombs, the stolen sleep, the reduced salary, the figure no longer girly, the sense that my story now matters little to the rest of the world, and it never mattered all much in the first place.

But also I am Hemingway at that bridge, or at least his narrative stand-in, that soldier, which means I am the survivor who writes about all the carnage and the echoes of carnage that I have seen from my post, standing here relatively unscathed—physically—but emotionally destroyed. I am Hemingway writing with complete detachment about what this all means, and by detachment, I mean a disquieted state unlike any other. And that disquieted state is what readers cleave to. It’s what we consider strength. We want to witness someone—a man, a solider, a woman before a computer thinking about being a woman on a cot right after the baby came out from inside her—who is unraveling but still able to write about the horror that unraveled her; we want disquieted tales filled with restrained but savage glory about the twelve hours, the twenty hours, the thirty-six hours of breathing through a trampling of our gut and pelvis, about a sex that rips with the eruption of birth, about the tiny screams layered with our larger screams and finally a breast offered up to an animal child, and then offered up again so many times that it bleeds, becomes infected, draws a fever and illness and maybe depression, and yet this man, this soldier, this woman at her computer looking back on all this—which is to say me, but also Hemingway—this writer is sober in her understanding that her suffering is human suffering, that this story of her one birth is also a universal story of the loss and violence that connects us all.

My body after birth was that old man on the bridge and the reader’s knowledge of the warplanes and the destroyed villages and the threat of Fascism underpinning all of that carnage that have reworked everything in his tiny world. And I was the war and that soldier filled with restrained unraveling and emotions that I sometimes let slip out without meaning to, but also meaning to, because I am destroyed but still standing here stoically by the bridge, which is to say by this piece of paper upon which I write about the bridge and my body and the warplanes and this baby who has changed everything. And you, readers, will devour what I write. You will read my restrained but subtly brutal birth story and finally recognize that we who give birth are dauntless soldiers returning to the fight and we are also the old men ignoring the bombs because we have animals at home we love too much to go on and we have never felt more alive than we do right now, and no one who hasn’t done this can know the ecstasy of this complete surrender to forces beyond our control, of the endurance we need to live within the warzone from dawn until starlight, the bloodlust we now have for all creatures small and milky soft.

Sarah Viren is the author of Mine, which won the River Teeth Book Prize and the GLCA New Writers Award, and was longlisted or a finalist for the PEN/Diamonstein-Spielvogel Award for the Art of the Essay, a Foreword Indies Award, and a Lambda Literary Award. Her writing appears in the New York Times Magazine, the Oxford American, Texas Monthly, and elsewhere, and has been supported by an NEA Fellowship and a Kerouac House Writing Residency. She is an assistant professor at Arizona State University, and her next book, Autobiography of Shadows, is forthcoming from Scribner Books.