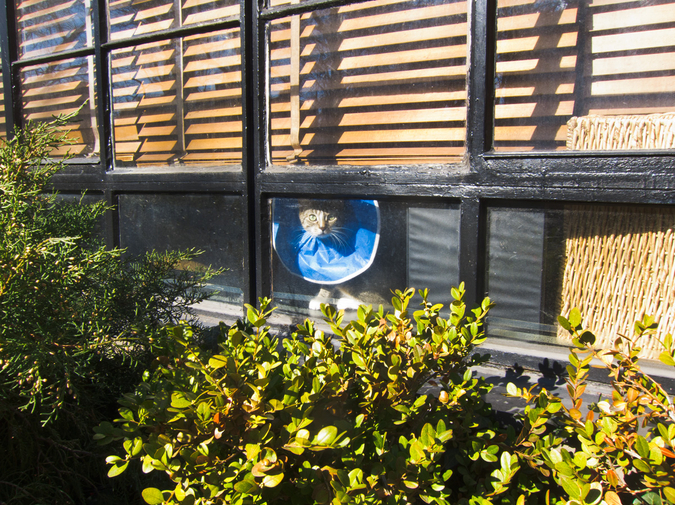 Another dry day, so I build my wall—cinderblocks delivered to my driveway— and another house for sale sign comes down and the new neighbors, like the old, watch as I build a cinderblock wall around the perimeter of my lawn. My house is not for sale. I live in this house. I’ve lived in this house for years and years, and the neighbors gawk. The neighbors stand hands on hips on the sidewalk outside my wall and they say excuse me. The neighbors gawk and graze their grass. The neighbors walk hands and knees across their lawns and chew their grass like cud. My grass grows longer with every rain. The neighbors on hands and knees watch my grass from my sidewalk—my sidewalk the city took away from me and they want to mow my grass with their teeth. Git git git git git, I say. The city and the neighbors. The city says you have an old garbage can. The city says you need the new 94 gallon garbage can. You can’t put these cinderblocks here. You can’t stack these cinderblocks; the manner in which you’re going about your business is alarming to the city and the neighbors. What about your brick house? My brick house will be a brick house in a cinderblock house. A woman who says she loves me says what about your brick house, your beautiful brick house. A neighbor woman says she loves me and cries on the city sidewalk next to my 60 gallon garbage can, and I say what about the neighbor man who leaves flowers in your mailbox, and she says flowers die in the mailbox, and I say dead flowers or not the neighbor man loves you. He will walk hands and knees to your front lawn and chew your grass. The neighbor woman says don’t say what’s best for me. The neighbor man has grass-green lips and awl-sharp teeth. My hands dried with cinder. My hands cracked and bled dry in my neighbor man’s green hands as he thanks me for building this beautiful wall. On hands and knees the city barks at my front door from the sidewalk they took from me. The city posts signs on nails through my front door, but this is the last time, I say from the second story window of my beautiful brick house. I hack my door down with a pickaxe and a man with a microphone coos a smooth jazz sound for me to stop. The city coos smooth jazz through a microphone telling me I have to have a front door as I fill the front hole with the cinderblocks delivered to my driveway. The woman who says she loves me strikes at my wall with a sledgehammer and says what of your garden. A green-kneed man stands behind her next to my garbage can and says son. The man who says son kicks with lead boots at the wall that the woman who says she loves me strikes with a sledgehammer. You don’t have doors, they yell up to my perch in the sky. You invited us to dinner but you don’t have any doors. But we can eat like this, I say. I throw down a rope on a pail and they fill it with sweet wine. Lips and love purple and swollen from the pail of sweet wine, but we are all hoarse, gapped across my yellow grass, and the neighbors look up from grazing on hands and knees; they look up to my cinderblock perch. Don’t you look up here! I say, don’t you look up here to my perch, and the man who says son goes back to picking grass with his teeth. The woman who says she loves me strikes at the city sidewalk with a sledgehammer. The city comes in white trucks and vans and snarls at the neighbor woman. The woman destroys the city sidewalk. The woman says send down your pail and she puts the pieces of sidewalk in the pail, and I build a ceiling over my perch until my cinderblock house contains my brick house and my brick house contains nothing but x and y and z, and what of my green grass now? Is it not true the neighbor man loves you? I shout through a wall. I am not the animal here! I am not the one on hands and knees grazing my lawn! I shout through the city sidewalk. Nothing to chew here! Hear me?

Joe Lucido is an MFA candidate at the University of Alabama where he teaches in the Alabama Prison Arts + Education Program. His work appears or is forthcoming in SmokeLong Quarterly, apt Online, Johnny America, Cloud Rodeo, and others. He grew up in the suburbs of St. Louis.