An Interview with Jedediah Berry 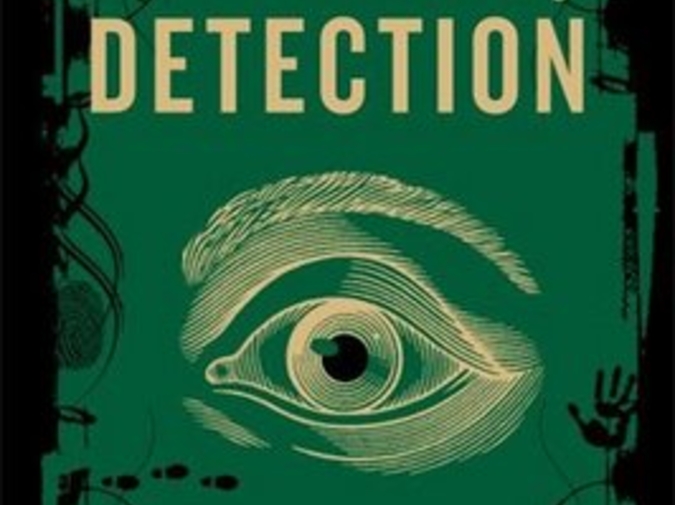 Jedediah Berry's first novel The Manual of Detection came out in February from the Penguin Press to uniformly awesome reviews from places like the New York Times Book Review, The Boston Globe, The New Yorker and numerous other newspapers and magazines. Here's how the jacket copy describes the novel: "In an unnamed city always slick with rain, Charles Unwin toils as a clerk at a huge, imperious detective agency. All he knows about solving mysteries comes from the reports he's filed for the illustrious detective Travis Sivart. When Sivart goes missing and his supervisor turns up murdered, Unwin is suddenly promoted to detective, a rank for which he lacks both the skills and the stomach. His only guidance comes from his new assistant, who would be perfect if she weren't so sleepy, and from the pithy yet profound Manual of Detection."

Jedediah lives in Northampton, MA and is an assistant editor atSmall Beer Press. His fiction has appeared in many fine literary journals including Best New American Voices and Best American Fantasy. His website is here. We spoke recently via email.

JW: I really enjoyed reading The Manual of Detection. It was such a fun novel to live inside of for a while. One of the things I found particularly effective was the unusual sense of place. The constant rain and need for umbrellas and hats and overcoats gave the city a sort of menacing formality which I thought paralleled really nicely with other aspects of the novel — the hierarchical and mysterious organizational structure inside the Agency, for instance. Even in the specific elements of the novel's plot, I felt the city itself at work on Unwin. It was a place where everything seems to be rotated a couple degrees from the familiar, and watching Unwin negotiate his way through it, trying to solve all these mysteries around him, was such a satisfying reading experience. Talk, if you would, a little about the city itself. You're really working in fun ways against the conventions of genre convention, and the city seemed to be a major part of this. Ok, so, city, go:

JB: Parts of the city are borrowed from actual cities — New York especially, which is represented in locations like the train terminal and the museum. But I did leave my city unnamed because I wanted it to function as the settings of fables function: untethered, occupying a space that's psychological as much as it is physical, and hopefully familiar despite its anonymity.

Because it's a largely imaginary place, this did allow me room to play with genre tropes. I pushed those elements as far as I could — the ceaseless rain, the shadows, the gloomy streets and alleys. It's a way, as I see it, of letting everyone in on the game. We know this place from books and films, we know the tone it sets for the lives of the characters: now let's see what kind of fun we can have with it. I imagined the city as a half-conscious entity, and the residents are almost aware of the fact that they're living in the belly of a noir mystery story. So the reader should hopefully share in that awareness.

But it's also a city of disparate parts, and each location embodies some aspect of the underlying story. There's the Agency, with its paranoia and obsession with order. There's the Travels-No-More Carnival, which acts as its opposite. And there are the places between them, influenced by both sides and keeping lots of secrets. But all these boundaries and distinctions become blurred over time — to solve those mysteries you mentioned, Unwin has to expand his knowledge of the city and what its divisions and collusions imply.

JW: The comparisons TMD is drawing out in the world are pretty broad (and very impressive). For example, The New York Times Book Review said The Manual of Detection: "Read[s] like something lifted from Ray Bradbury's 'Dark Carnival' and dropped into a Kafka setting...." This novel strikes me as having a very diverse set of influences. Apart from Bradbury and Kafka, reviewers have drawn comparisons to Wes Anderson, Borges, Terry Gilliam and others. What's the genetic make up of The Manual of Detection as you see it?

JB: It's been a bit dizzying to see those names pile up. Some of them I did have in mind, and some of them were probably swaying me without my thinking about it. But the two writers whose influence I'm most conscious of are Italo Calvino and Angela Carter. Calvino for his precise, crystalline prose — which I strive for as best I'm able — and for the levity he brought to most all his work. Carter for her sense of the carnivalesque, the grotesque, the mysterious. Few things have been as important to me as the discovery of those two writers. They're different in most ways, but both took cues from fable and folktale, appropriating old forms of storytelling and reinventing them, turning them on their heads. I think they shook up my sense of things — of what fiction could do, the forms it could take — at precisely the moment I needed shaking up.

The form I'm trying to play with in this novel is the other strand of the DNA, and it comes straight out of genre fiction: the novels of Raymond Chandler and Dashiell Hammett in particular. I think it's hard to experiment with that material without also acknowledging the influence of film noir. I love the work of Robert Siodmak, and I never get bored of watching John Huston's adaptation of The Maltese Falconor Howard Hawks's take on The Big Sleep.

I could go further, and mention the films of Jeunet and Caro, G.K. Chesterton's The Man Who Was Thursday, Lewis Carroll's Alice books, German Expressionism, surrealist painting and photography. But then I'll just make myself dizzy, and ultimately I hope the book stands on its own terms.

JW: The book really occupies its own territory, which is probably why it's drawing such a diverse set of comparisons. I'd like to ask you later about Small Beer Press, which I know is concerned with the idea of bridging genre, but talk a little more about this "other strand of DNA" as it relates to your own work. Do you see yourself as a writer who works in between genres? What roll do the conventions and limitation of genre have in your work?

I'm always going back and forth on this. Sometimes I want to declare: "The boundaries between genres are meaningless!" But then I think of the wonderful material that exists because genre boundaries have been drawn. The tropes are familiar because they've been used and reused — wearing them out in some regards but also giving them almost archetypal qualities. Their resonance is undeniable, and I'm drawn to them in part because they allow for a kind of shorthand.

Look at what Cormac McCarthy did with The Road (one of the most devastatingly beautiful novels of recent times, in my opinion). The world has ended in that book — really ended — and McCarthy never had to explain what happened to bring the apocalypse about. It's over, everything's covered in ash, there are cannibals, and that's all we need to know. He was able to pull that off in part because so many science fiction writers had already done the work of ending the world for him.

Like all writers, I'm a bit of a thief. And there's so much good plunder in genre literature. Recently I've been thinking about barbarians. I saw somewhere that Barack Obama has a collection of Conan the Barbarian comic books. I have a pile of those in my mother's attic, and I love the original Robert E. Howard stories (which are terrible in many ways but also completely thrilling and brilliant). So maybe it's time to write some barbarian fiction.

JW: You are in the middle of a busy reading and touring schedule. What's that been like? Are you starting any literary feuds?

I never thought I'd be the kind of person who could bear to stand up in front of people and say things out loud. Even if the things I was saying had been written down in advance, as they are in this case. But I admit I've grown to enjoy it. After years of being mostly alone with this story, it's exciting to see immediate reactions from complete strangers. Especially when they find it funny. You never know whether the humor is going to click, and I'm grateful every time that it does.

The independent bookshops have been very supportive of the novel, so it's gratifying to meet the people there in the brick and mortar stores, hand-selling books every day, working to build and maintain a community of readers. And questions about the book coming from that community have been insightful, often leading me to think about aspects of the book I hadn't considered before.

Funny stories? At the book launch reading, which was hosted by Amherst Books, we had a magician perform the opening act. She was fantastic. A very talented local writer named Brian Baldi volunteered to go on stage for one trick. He was supposed to feel a ghost tap his shoulder, but it turned out he had a numb spot on his shoulder that not even a ghost could touch.

As for author feuds, I don't have one but I do want one. Preferably something my opponent and I can draw out over the course of many years. I imagine we'd each use our differences to hone our writing — that's how that works, right? Really, the benefits could be many. Interested parties should feel free to contact me.

JW: You're an assistant editor at Small Beer Press, which is a fantastic press here in Western Massachusetts run by the writers Kelly Link and Gavin Grant. Can you tell us a little more about Small Beer and what it's like working for them?

I admired the work that Small Beer Press was doing for years before I became associated with them. I think Kelly and Gavin can be credited with helping to bring about a certain shift in the landscape of fiction being published today. They did a lot to make those genre walls more porous by publishing writers like Carol Emshwiller and Maureen McHugh, and more recently Benjamin Rosenbaum, John Kessel, and Benjamin Parzybok, who are writing stories and novels that have elements of science fiction and fantasy to them, but which reach over into new territory. You see in this work an astonishing process of invention and reinvention — it's there in Kelly Link's fiction as well.

So in addition to the very satisfying work of making books, of working with writers, of putting this fiction out there into the world, being at Small Beer has been a way for me to participate in a community of writers and readers who are doing things I find fascinating and inspiring.

JW: I recently got to hear you read from some of your new work, which was really great. What's next for you?

That story, about a mad scientist preparing for the end of the world, will be in the next issue of Conjunctions. I'm writing a lot of stories just now, in part because I'd been saving up so many ideas while revising The Manual of Detection. I've also just written a one act play for my sister, actress Cait Bliss, to perform. There are some longer projects in the works as well. For the moment, that means lots of research into the American Revolution, the life and writings of Washington Irving, and the history of the plot of land I grew up on in upstate New York.