An Assessment of Fast Food Hamburgers in the Southeastern United States, pt. 3 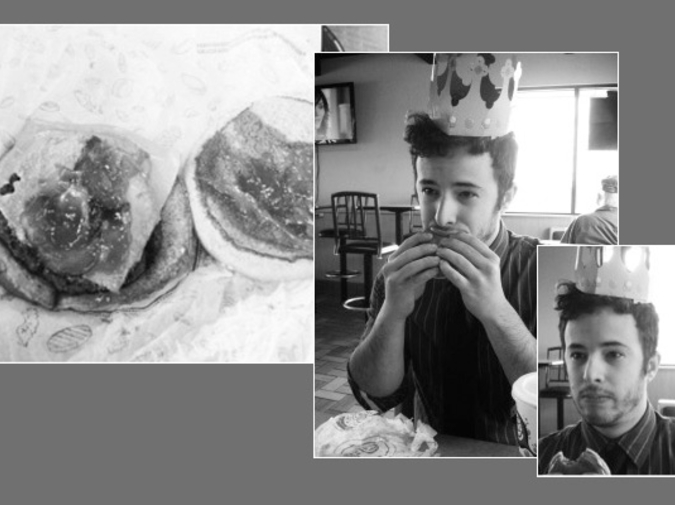 NOTE: This is the second of four installments in this series. We will be featuring two hamburger joints at a time. Read installments 1 and 2.

It wasn’t meant to be this way. Subway was supposed to be a healthy intermission from beef, a day of renewal. Then I saw a poster for a sandwich called the “Classic Angus Melt” and I knew it was no melt. It was a 6-inch long hamburger, a Longburger, and I was morally obligated to catalog it with the rest of its kind.

Subway is the largest single-brand fast food chain in the world. They are known for assertive freshness and still-sort-of-fat human mascot Jared Fogle. Also, it turns out that Subway is the best restaurant in America[1].

I approached the Sandwich Artist and ordered a hamburger. He was sweating the unnatural sweat of a mescaline addict. His pupils were the size of dust particles but the room was dim. He suggested the Angus Melt and I nodded. He reached into a basin and grabbed something unrecognizable. It looked like a slab of cat litter. At first I thought: “why is he showing me this? I’m glad I’m not about to eat that.” But soon I realized that it was, in fact, the frozen Angus patty that I was about to eat. He thawed it out in the toaster oven while he continued to perspire, pulling his left hand into a fist and relaxing it again.

The first bite was terrible. It tasted like rubber, flesh and chemicals. I started to worry whether it had been prepared correctly. It had a fluffy texture that was totally unlike meat. I tried to focus on the flavors of the vegetables but the chemical fluff taste hung in the periphery, always present, tainting everything, waxing and waning unpredictably in every bite. The six inches became a curse; the Longburger was not only twice the length of a normal hamburger but twice as foul.

The Longburger was the only hamburger that caused me to feel concern for my personal wellbeing. That chemical taste told my body: “Do not eat this. This is poison.” I had to exercise my will and manually consume it. On the upside, when I had finished it, after looking back over my life, I felt as if I was getting a second chance. I went outside and called my mother and asked her about her day.

BURGER KING – see feature image above for photographs from this restaurant

Burger King runs a global fast food empire consisting of 12,000+ restaurants in 17 countries. It is known as a “shitty place to eat” that continues to thrive due to funny commercials and meme-generating ad campaigns.

The first thing I noticed about Burger King were the flat screen TVs. The menu was three flat screen TVs. There were three other flat screen TVs playing college basketball. There was one flat screen TV displaying a pile of french fries being slowly zoomed in and out on. The technology was dazzling but the actual menu was pretty limited. Mostly different sized burgers with unusual toppings like ranch dressing or bleu cheese or thick sliced bacon. Many of these terrifying mutants violated both the first and second Worthen’s Laws of Condiments[2]. I ordered a hamburger and a Sprite, settled into a booth and watched the pile of fries approach and recede.

The Burger King burger was small and misshapen. It was not the perfect, machine produced hamburger of McDonald’s or Wendy’s. This hamburger looked like a team of employees had fondled it aggressively and without purpose. The sesame seed bun was dented and chewy. On a pale altar of meat, three wayward pickles swam in a glistening blob of mustard and ketchup. Each bite was more unsatisfying than the last. It didn’t even have the salty charm of McDonald’s. It tasted like “not getting into college”.

And more so than the other restaurants, Burger King was full of obese customers, living reminders of what hamburgers could do if consumed without restraint. Each rounded jaw was tilted up at a flat screen TV, generating a perfect metaphor for America or something. A dozen smooth incubators for heart disease earnestly chewing.

[1] According to a laminated sign on the side of a Subway trashcan.

[2] Worthen’s Second Law of Condiments states that a special sauce (BBQ, Thousand Island, Ranch apparently) must be applied to the hamburger unaccompanied by other sauces.