An Assessment of Fast Food Hamburgers in the Southeastern United States, pt. 2 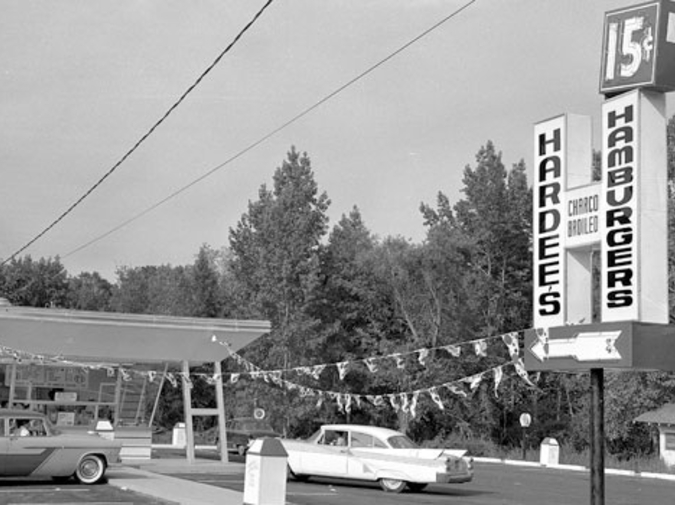 NOTE: This is the second of four installments in this series. We will be featuring two hamburger joints at a time. Read the first installment HERE.

Hardees is a major fast food chain in the southeast and Midwest, with 1,917 locations open. They are known for talking about Angus Beef and Thickburgers on TV. I was excited about Hardees because I had never been to one. I never had a friend who went to Hardees. I never even overheard a stranger claim to be going to Hardees at a later time. Hardees represented true mystery. I could explore it, like a cave deep in the Congo, and document the horrible secrets within.

The sad truth is that Hardees is very similar to McDonald’s. They offer salty, ageless meat and plastic chairs with subtle indentations meant to cradle the human butt.

I sat in a corner by the window, put the number 37 on my table and waited for my Thickburger to arrive. The restaurant was nearly empty. One old woman sat with her own Thickburger several booths down. She looked confused, as if she was considering how the trajectory of her long life had led her to this moment, this moment where she sat under the fluorescent lights of Hardees, gazing at a Thickburger with mustard on her hands.

An employee with bleached hair and acrylic nails approached me and dropped off a massive burger in a classic paper burger clamshell. The clamshell was open and the opposing compartment was filled with golden fries. She asked me if I wanted ketchup and I said that I did. I watched as she walked over to the ketchup pump and squirted ketchup into two small cups. Between squirts she would look back at me across the restaurant and make eye contact. I suppose this service was technically good but it made me feel uneasy.

The Thickburger itself was a tasty motherfucker, ugly but delicious. The patty was the same pseudo-meat conglomerate as McDonald’s patties but it was three times the size and had been inexplicably grilled on something. Cheese, onion, ketchup, mustard and mayonnaise also made an appearance, dripping off the sides in a decadent violation of the 1st law of condiments.

I chewed its char-grilled bounty and noticed that I seemed to be thinking deep thoughts. I jotted some of them down on a yellow napkin: “We are all so small compared to the sun or a galaxy” and “Does a natural cut french fry know the nature of its cut?”

As I finished my meal, I flipped the clamshell closed and saw a quote from CNN printed on the outside, under the squinting Hardees star. “Hardees has unveiled a hamburger to end all hamburgers.” I was impressed. This wasn’t some fake news source like “The Daily Hamburger.” This was CNN. There was something ultimate, even final about the Thickburger, and CNN was the only network with the journalistic integrity to comment on it.

I left my napkin musings on the table for the shift manager to ponder.

Wendy’s is the third largest burger chain in the world behind McDonald’s and Burger King. They have a reputation for making chili out of old hamburgers and pioneering the spicy chicken sandwich. Their hamburgers are also square.

My hamburger came to me swaddled in thin paper like the little baby Jesus, with its angular meat poking out into the world of man. I sat down with it at a table glistening with disinfectant. Despite it being 12:30, there was no one in the restaurant but the small cabal of teenage employees. They bantered. They flirted with each other. The loins of the young proletariat burned as they rang up orders and prepared hamburgers. They were making plans to go down to the beach after their shift. They were probably going to get into some heavy petting or at least make-out (conjecture).

The hamburger was delicious. The meat tasted slightly more real than all of the preceding patties. It reminded me of my glory years, eating hamburgers in the back of pick-up trucks, taking my own girlfriends to the beach for a cautious dry hump under the pier. The nostalgia came on delicately and lasted for the duration of the meal. I lingered for several moments just staring out the window and watching traffic.