An Assessment of Fast Food Hamburgers in the Southeastern United States, pt. 1 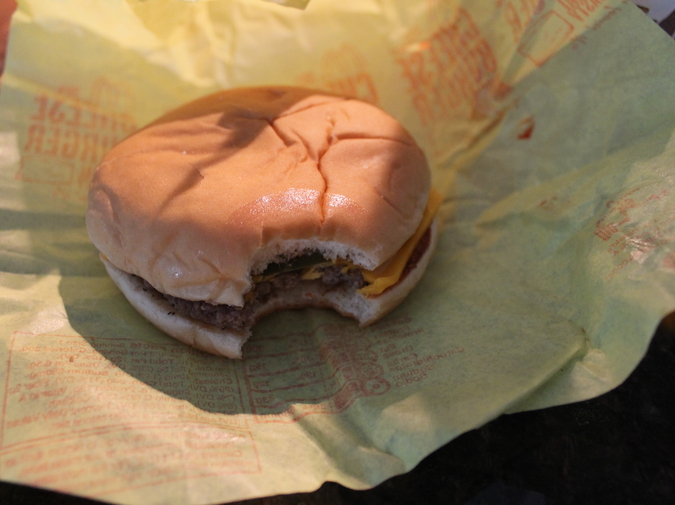 NOTE: This is the first of four installments in this series. We will be featuring two hamburger joints at a time, every other week, for the next 8 weeks. Enjoy.

McDonald’s is the ancient womb of the fast food business model. For the better half of a century it has expanded in tandem with the civilized world, currently boasting more than 33,000 restaurants. McDonald’s’ aesthetic recently changed from “red and yellow plastic/imitation wood tiling” to “Starbucks”. These transcendent new locations are called: “McCafes” and they combine a hip coffee shop vibe, actual coffee, and free wi-fi with classic McDonald’s staples like hamburgers, chicken nugs, and colorful play-tubes.

I settled down to eat my McDonald’s hamburger in a clean booth with stylish upholstery. The hamburger ran me .89 cents and contained 520 grams of sodium. Before I ate, I took notice of the other customers. These people were different than I had anticipated. They were thin, young professionals with salads and coffee. They hadn’t come for hamburgers. They came, as far as I could tell, for the atmosphere of McDonald’s.

I unwrapped my tiny hamburger. It smelled like McDonald’s, a warm salty smell, like the breath of a healthy German Shepherd. The bun was smooth, immaculate, and pliant. It held my caress like memory foam. The burger consisted of a thin strip of meat, mustard and ketchup, two tangy pickles and some chopped up shit that was probably onions (speculation). I took my first bite. I didn’t taste hamburger or meat. I tasted the wonderful flavor of salt. I experienced a sudden clarity. The McCafe was not a restaurant at all but a shrine where people of all races and creeds could go to worship sodium and check their email.

Despite these facts, my mood was extremely good. Respectable, attractive people surrounded me. They all looked so sharp and professional that I even started to consider my own career choices. I found the inner fortitude to consider night classes in computers, medicine, or business. My work ethic surged. I believed in McDonald’s. I believed in myself. I experienced pride, ambition and the bittersweet arrival of a partial erection

Unfortunately, when I arrived, there were two men with Celtic neck tattoos leaf blowing the parking lot. They made so much noise that the woman on the other end of the intercom could barely hear my order (a hamburger and an Ocean Water[1]). Also, while my window was down, their activities caused a small piece of detritus to fly into my eye. I experienced discomfort for several minutes.

After placing my order I rolled my window back up and listened to my Lady Gaga CD. The era of the drive-in was clearly over. Their outdoor area, defined by several green tables and Sonic radio, was desolate even at lunchtime. Only two other vehicles were present and we parked as far away from each other as physically possible. There were no teenagers playing hooky, no little league teams celebrating after a game, no sense of community. The age of post-war solidarity dissolved into the millennium of individual whim. I wanted to listen to my own music, in my own car, surrounded by piles of my own refuse (my actual feelings).

A man in his 40’s skated out to my window. His skating didn’t stem from light-hearted diversion but from corporate mandate; a corporate mandate intended to create the illusion of lighthearted diversion where in fact there could mathematically be none. Somewhere, on paper, this presentation was supposed to appear groovy but instead it made me moderately sad. He handed me my hamburger sack and told me that I could direct any complaints directly to him, that his name was Cameron. I accidentally looked in his eyes when I said “thank you” and the fatigue I saw there made my heart quiver involuntarily. It was a fatigue bordering on insanity, a special fatigue reserved solely for carhops.

I started with the Ocean Water. It tasted like sweetened engine coolant and refreshed me deeply. Then I unwrapped my hamburger. The Sonic Burger was robust, no doubt worth the $2.89 I paid for it. It also looked like the picture on the menu. The tomato was red. The lettuce was green. The bun was toasted. The illusion of freshness was intact. But when I took my first bite, I was disappointed to note that Sonic had violated Worthen’s 1st Law of Condiments[2]. This flagrant disregard for established principles predictably led to “flavor confusion” and undue wetness. Also, the bun had a pulpy quality, like newspaper left in the rain. But overall, the hamburger was pretty tasty.

Perhaps it was the noise of the leaf blowers, or the soulless, lingering gaze of Cameron the carhop, but as I sat chewing in my car my optimistic mood began to falter. I experienced a strange malaise. I felt aimlessness; I forgot why I was even eating a hamburger in a car. The mindless scream of the leaf-blowers enveloped me. I experienced nausea and unfocused anxiety about the future. The Sonic burger fucked with me existentially, it made me remember every dumb thing I had ever said, every failure I had ever known, every opportunity I had ever missed, every girl I had ever cheated on or made cry, every taciturn meal with my parents before the divorce. These feelings seemed to span hours but when I finally rallied with a sip of Ocean Water, only moments had passed.

[1] Sprite supplemented with the natural flavors of the blue coconut

[2] Worthen’s 1st Law of Condiments states that at most two of the primary sauces (ketchup, mustard and mayonnaise) may be applied in good faith to the same hamburger.