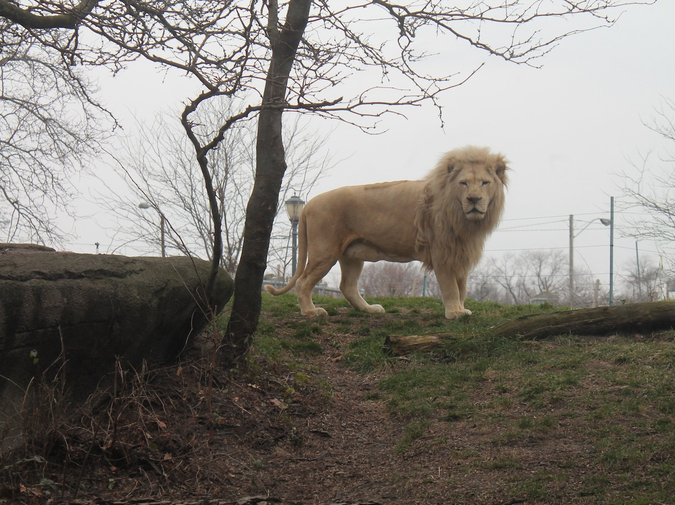 This month sees publication of our newest print issue, Hobart #14. As such, and as we have done to accompany our last few print issues, we are devoting the entire month to various "bonus materials" -- photo essays, alternate endings, drawings, extra short fictions, interviews, & more! Below, another "Animal Collection" short by Colin Winnette, to accompany "Tarantula" and "Killer Whale" in #14.

I scratched my neck until a lion’s mane appeared. I broke the skin and it poured right out. Up until then I hadn’t received much attention from women. I hadn’t received much attention from anyone really. But all of a sudden, I was a point of interest. It wasn’t something I knew how to handle. My best friend said we were in luck. Had I ever seen Teen Wolf? Things were about to start going our way. But I was still terrible at sports. In fact, I was worse than I’d ever been. I couldn’t turn very fast, couldn’t hold things like I used to. My thumbs were stiff. My fingers wanted to curl. My best friend told me to practice. If the mane didn’t come with any supernatural talent, I could always train myself, get better on my own, and that would still be impressive. More and more women said hello to me on the street. I got free coffees in cafes. A girl at a bar winked at me from across the room, and I had been pretty sure people didn’t actually do that. It didn’t feel right. I couldn’t get comfortable. I didn’t talk as much as I used to. I was less friendly. People said, It’s a nice color, did you dye it? I nodded a lot, or pretended not to notice them. I kept to myself. My palms got bigger and my fingers kept curling. They doubled over to half their size. I slouched a little so people would notice me less. I tried to cover the hair, but it was spilling out from my wrists, my thighs, my neck. I was scratching here and there, scratching all over, and it just kept coming. I stopped going out as much. I ordered in, left money in front of the door with a note that said, Be right back. When I did leave the house, women made meaningful eye contact. I hunched over so I didn’t have to think about it. It’s not that I wasn’t flattered, but it made me nervous. I didn’t know what to make of all the hair, the claws. I didn’t know what it meant, if it meant anything. My best friend stopped coming over because when he did I growled at him until he left. I wasn’t going to be exploited. I wasn’t there for his gain. I didn’t want to flirt or play sports or wear t-shirts. I went to the bank in order to cash a check, but they wouldn’t help me. They called the police, and I slunk out the back. I got even lower to the ground so I wouldn’t have to look anybody in the eye. I stared at the cement, at the dirt, at pigeons moving past. Little kids tried to touch me, but their mothers held them back. I took shits wherever I wanted, drank water from the gutters when it rained. I ate trash when it looked good. I started to feel better. In a way, I was more in control of my life than I’d ever been. And for whatever reason, I wasn’t really lonely anymore. It was liberating: ignoring phone calls and hellos, sleeping outside whenever the sun hit me right, having a tail to swing from time to time, whatever was needed to keep the flies at bay. I was even able to find a job that didn’t ask much of me, or not much more than those few things. I’m fed regularly and fed well. People keep their distance. There’s even a girl I like, and I think every day about having her. But most of the time I just pad about in circles, thinking how little good it does to guess what happens next.

Colin Winnette is the author of the novel Revelation (Mutable Sound 2011) and a collection of short stories, Animal Collection (Spork Press 2012), in which the featured stories are included. He was recently the recipient of the Sonora Review's 2012 Fiction Award. His newest book, a collection of novellas entitled A Long Line of Diggers, is forthcoming from Atticus Books in March 2013. He lives in San Francisco.