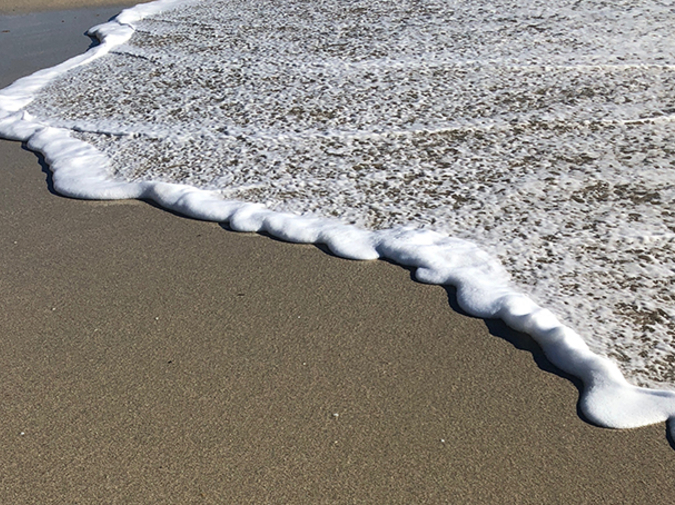 Outside, sun and palm trees, a pale blue sky; a parking lot full of Audis and Acuras, Teslas and Beamers. The constant sun, I thought. At it again.

Standing next to me was Judith, the mother of my son’s friend and, I had recently learned, one of the foremost real estate attorneys in the county whose husband owned a hedge fund company. She was pregnant, overdue with her second, and there we were, having found ourselves in line together at the Redwood Starbucks remarkably sans kids. Her hair was a mane of buoyant shiny, black curls. She had especially pale white skin, remarkably big dark eyes and a long, thin nose down which she stared. All around us, trim, fit people, massive iPhones in hands, sharply tailored clothing, and a purpose that they seemed to wear like invisible bling, confidently and indifferently.

The first time she had Luke over for a playdate at her stunning trilevel in the hills, she had confessed to me with a shake of her curls and what seemed to be multiple distractions in her eyes, “I just hate playdates. The expectation for snacks and entertainment; the small talk. I suppose I could have Maria make you some coffee. Do you think you really want it?” And I didn’t, of course not! She gave me a tour of the house, immaculately airy and white, and when we settled back in the family room upon the soft wool wraparound couch before the retro 1960’s wood-burning stove, she grabbed her iPhone on the adjacent glass-topped end table and said, “I hope you don’t mind I have to get to some of these calls,” and left me to a slick issue of Dwell while the boys played.

I was new in town, new to the preschool, and fishing for friends. When you’re poor, though, in a rich town, it’s easier imagined than done. Which is what I did—I took invigorating hikes in the hills with friendly moms while our kids attended the local co-op preschool for three hours three days a week; I had stimulating conversations with smart women over French press coffee in my 500 square foot apartment with the truly astonishing view of the neighborhood monkey tree.

In reality, I was coveting my place in line at Starbucks, treating myself to a monthly coffee out, and had just laughingly shared with Judith what I suspected initiated my labor with Luke three years ago and might prove helpful to her too—the mopping that I had, until that moment, considered to be an admirable, if slightly amusing, mark of discipline and a source of a certain degree of marginal, albeit plebian, domestic pride. My own mother, after all, had been a mopper, a truly vociferous housecleaner.

She set her leather handbag on the counter and ordered “a grande almond milk chai latte, please” into its deep, rich-smelling depths, digging around in there through what I imagined were many beautiful and exclusive items, and pulled out a wallet with a bright, brassy zipper. “But don’t make it too hot,” she eyed the barista behind the counter whose cheeks and forehead were slick, youthy domes. “Why do they make it so hot?” she brought her chin to her shoulder and gave me a close-lipped smile. And I’d be the first to admit that she had beautiful cheekbones.

It would soon be pick-up time at the boys’ preschool, and so we stood by the pick-up counter, waiting our turn, she eying her watch, asking how I was. All around us, beautiful, buzzing people. When the drinks came, she was at the counter instantly. She swept her chai latte into her palm, brought the plastic lid to her lips while half-smiling and waving “bye” to me, and headed to the door.

The ferocity of her coming to a complete stop in the middle of the café was startling, admirable, even, for its forcing the man behind her to abruptly veer to the side and better secure the fold of the newspaper under his armpit. Despite being immensely pregnant and overdue, she wore her loose, cream-colored tunic and linen slacks, her thick-soled flip-flops, her slouchy leather purse over one shoulder, as if she’d have it no other way.

She returned to the pick-up counter with the drink in her hand. “Excuse me.” She edged past others waiting, stood in front of the counter, leaned over into the space behind where two baristas were trying to keep up with the line that had instantly appeared, and smiled warmly. “I’m so sorry, but this is too hot. Is there any way you could cool it off? Just a notch?” The barista with the dome forehead, the beautiful skin, had been joined by one with pink hair, a nose ring, large breasts and several colorful tattoos up her arms. She commanded her work, buzzing between six separate shots of espresso, a milk steamer, and a small refrigerator from which she pulled several varieties of milk.

“Huh?” she looked at Judith, one hand at the espresso machine while her other reached for a paper cup.

And for a split second, the large, powerful barista, who seemed to emote a more swarthy confidence than everyone else, cups and shots of espresso and gallons of various milks and the steamer shooshing and sizzling full-power at her fingertips, looked at me.

What can I say? I am not courageous. I am weak. I am only certain in imagination. It was all I could do to keep myself from leaving my hot, rich coffee (that I loved; that I treated myself to rarely because of its cost; that I savored like liquid gold because it was accompanied by the rare occasion of me inhabiting my very own space) and running out the door; leaving that powerful woman and bee-lining it out of the espresso-smelling, Toms-wearing, cashmere-clad crowd; so many of them seemingly and entirely distraught with the annoying wait, single-handedly swiping through phones or talking on them with loud, assured voices.

It’s the constant sun, I thought again then, feeling an encroaching panic as I felt them all around me, long, slender arms; iPhones on ears; soft, sun-streaked hair falling over shoulders; lean, muscled bodies; crystal-clear eyes that showed that they ruled their reality, left nothing to the imagination—that there was absolutely nothing left to take.

It’s the sun, I told myself again. Too much sun makes people too hyper, too happy, too sure of themselves. What we need is a little rain, some dark clouds, a berating storm. An epidemic; a bewildering illness that will zip through us like fire and leave us gasping with cheeks against the ground.

When the barista said, “No problem, let me make you a new one,” I simply couldn’t believe it.

And so I blame my shock, my confusion, for the fact that as I slipped by Judith to grab my coffee on the counter, and she turned to me and said, “SO hot”—in a strange and disconcerting moment of boldness I pretended I didn’t even know her, she was no friend of mine. I rushed out into the sun and it hit me straight in the eyes.

Sommer Schafer is a senior editor of The Forge Literary Magazine. She has stories in Boulevard, Catapult, The Carolina Quarterly, Fiction, Ninth Letter, Glimmer Train, Santa Monica Review, and others. Read more about her at www.sommerschafer.com.