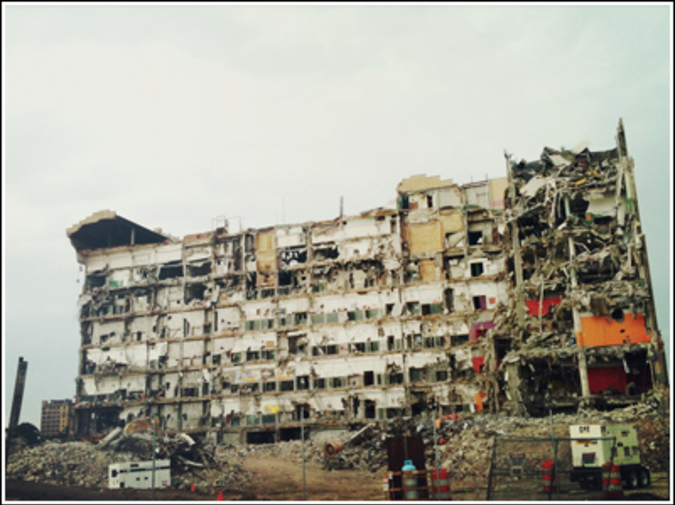 At one a.m. a man loads mannequin parts into the trunk of an orange hatchback.

“I signed up for a thing online,” he tells me. “You put your name into this big database, along with a bunch of days and times you wanna’ get prayed for, and they’ll do it. You get up to five prayers, totally free. Five dollars gets you the daily prayer package.”

He drops a mannequin child’s torso roughly the size and shape of a Christmas ham. The torso has cut his finger. He curses, sucks the cut, and says:

“Or there’s another package where you pay ten bucks a month to get prayed for constantly, no matter where in the world you are, living or dead. I got that one just to know, you know? That someone was always gonna’ be there to think about me? Does any of this answer your question?”

He drives faster and faster and the entire car is a tangle of limbs, torsos, an old pair of skis, and heads wearing clueless expressions. How can he see through all these parts? And yet the man speeds up and up and up and what little I can see of the street-lit buildings through the body parts melts into a single, varicolored blur. Through the mannequin brambles I glimpse a flash of his eyes, dark green, and his yawning mouth, a blackness broken by two semicircles of bright white teeth.

After earthquakes, car crashes are my biggest fear. After car crashes: green-eyed men. After green-eyed men: the possibility that I am wrong, and there exists in fact an angry God. After the existence of God: breathing in bits of soul through the smoke of someone else’s cigarette, especially in the case of menthols. After breathing in menthol souls: prayer.

I mean, are they praying for his health, his family, his soul, his...

“Oh.” he says, clearly disappointed. “Shit, you know I never really thought about that.”

I hear him frown. I hear him stare into his own lap. The car lists. He taps a Newport free of its pack, presses in the cigarette lighter. I roll down the window. The buildings and lights have gone. In the darkness hurtling by is a country I have never known. The country I have never known shrieks past the open window, the air of it anyway. Body parts break free from the tangle. They flow from the window into the wind.

“I don’t know,” he says, “I guess we just have different ideas of how prayer works.”

So what does he think prayer is?

“Well, it doesn’t have anything to do with language, I can tell you that. It’s outside of all this...” he wrinkles his nose in disgust, “talking.”

But where could such a massive act of prayer takes place? Warehouses, perhaps, filled with people perpetually praying up to God about him?

“Yes,” he says, “that’s right.” But something in his voice pleads.

I can’t see him through his soul or his smoke or his plastic parts. But he’s troubled, as anyone practiced in the elementary flavors of human silence could attest. This is a troubled, troubled hush broken only by the scrape of tires, and then the road starts to pitch.

Again I tell him my name is not Ezekiel and then ask him to slow down, or to stop even, whatever he’d like, really, just slower than this, but he ignores me.

“A computer program designed to pray for long strands of names? You think?”

I hear him grin.

“No, that’s actually funny. A computer praying for a person’s name. What do you do with that? You don’t put ten bucks a month on it I can tell you that much.”

He laughs for a very long time and then he takes an enormous swallow of air and uses it to laugh for another long time. Then he laughs again, and the road pitches and jerks, but it’s not the road. It’s an earthquake in a car crash with a green-eyed prayed-for Newport-smoker tossing his head impossibly back to laugh at the dome light.

Ramon Isao (ruh-MOAN e-SOW) is a screenwriter, actor, and MFA candidate at Columbia University where he taught various writing courses and served as the fiction editor of Columbia: A Journal of Art and Literature. He also co-authored the feature films Zombies of Mass Destruction (distributed by Lionsgate/After Dark) and Junk (Spring '12), in which he also co-stars. He lives in Brooklyn.