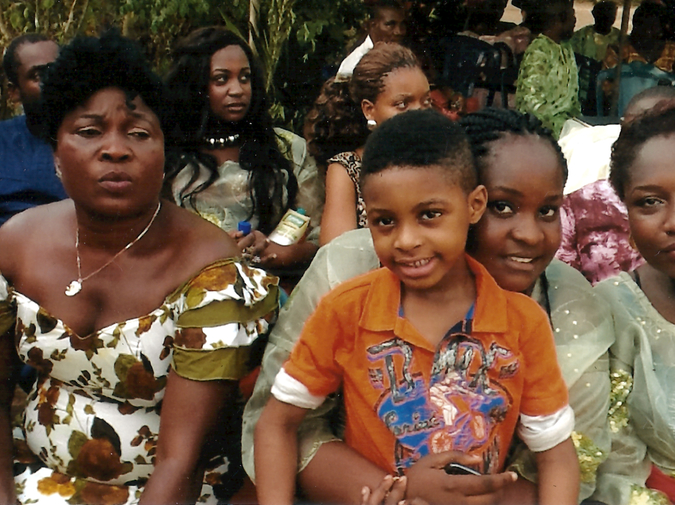 A family favorite is the one where I got jumped, gang-whipped in Morocco after some kids stole my Walkman. I was fourteen or fifteen. I’d later play it for laughs, like I was badly beaten, left for dead. In the moment though, it wasn’t too bad. After a few minutes on the ground, I sat up. It was an open, public square. I was alone. I could see the top of a Ferris wheel in the distance. The Walkman they stole didn’t have a face, and the tape was a cassette maxi-single, something b-list R&B, along the lines of BBD/Poison, but not BBD or Poison . . .

That was Morocco. Christmas break,1991. Before that, my family and I had made a couple of trips to Nigeria for the holidays. My father had grown up and went to school in Lagos, then the capital. But a true homecoming meant a long day’s drive to Owerri, a town where a few of my cousins lived, then from there to our ancestral village. We’d go in caravan, three or four cars, and the scenery was what you’d expect leaving the city. Broken, unplanned roads. Petrol lines. Standstill traffic for hours. Shirtless dudes and people doubled up on mopeds, crisscrossing everywhere. Coal black, shockingly muscular people, men and women, sweating bodies, roaming. People choking every street, every sidewalk and flyover bridge. Sitting dozens-deep, people, unemployed or insane or just idle, their feet dangling off highway ramps. Kids in packs sprinting down muddy streets. The weird, greasy fog swirling around is actually smoke, from putrid trash fires openly burning in the distance. I remember two specific things. One: walking through my father’s neighborhood in Lagos seeing a dead man lying face down in the dirt road next to a puddle. I stared as we walked past. My father said nothing, no explanation. I continued to stare as we neared the end of the street. Finally, he stirs. Slightly. Turns out he’s actually sleeping . . . Two: On the road going to Owerri, with traffic moving at a crawl. More than once I get out with my father to walk alongside the idling cars. See what’s going on. Walking over to the side of the double overpass we see that an armored truck has broken through the railing on the opposite bridge and is lying on its side on the highway below. And of course, a feeding frenzy, literally hundreds of people swarming, attacking it with sticks and bars, pieces of concrete, thirstily trying to break into what I now assume was likely an empty vault guarded by dead or dying men . . . Palm trees, heat. Barefoot women in headwraps, balancing stacks and stacks of produce and small appliances atop their heads. Loop in Fela, highlife, afrobeat. I was ten, eleven years old. This would be about 1989. Fucking Africa . . .

I remember the village. Calmer. Privacy of the bush, thick jungle, layered all around. Thatch-roofed huts, instead of tin shacks. Our sprawling family compound, circled by a high fence topped with spikes and broken glass. Dominated by the so called “Big House”, a pink, 70’s style tropical mansion, two stories, a dozen rooms. My grandfather, his English name was Benson. As the houseboys opened the gates, he came out on the balcony and fired off a shotgun, boom, one or two blasts. I wouldn’t understand until later the prodigal son element to my father’s story, having married an American woman. That initial trip had been his first time home after numerous conflicts and, I suppose, several turbulent years. It also might have been the semi-mandatory cue for the surrounding peoples to make their way over to pay respects . . . At any rate, there was obviously no carolling, no yuletide or weird, Euro-type mythology, aside from the one insanely long and meandering Anglican church service. In the roofless, Owerri mega-church that, no doubt, remains unfinished to this day. But until Sunday it was five-alarm activity in the village. Laughing and shouting, and hugging. Drinking. Warm introductions to relatives I ‘d never see again, all keenly interested, already, about who I was going to marry, whether I was ever going to speak Ibo, whether I was going to be a doctor or a lawyer. After they slaughtered the goat, I remember my Uncle Uche showing me the esophagus and lungs, blowing into it, a vaguely musical sound. Goat meat. Moi moi, and pepper soup. Google it. More than once, I remember being offered and gulping down generous servings of palm wine . . .

Or maybe I’m conflating the two or three different trips. There were the earlier ones, just me and my cousin Nneka, my cousin Junior, we’re all about the same age. Then the later situations where we were like eight or nine cousins, mob deep, a family unto ourselves. My father has two brothers and three sisters, almost all of whom had children around the same time and also emigrated to other countries. For us, diaspora kids, to all be in the village at once, among the local people, was like Superfriends. The Beatles. I was the only son of the first born son. Put that on an amulet, with beads, wear it on my neck. To give you an idea how people treated me. And I was the only one born in that fabled, mystical land of dreams called America . . . There was always a lot of adult stuff going on above our heads. From handshakes to raging, near fist-fights, drunken group arguments that went on all night. Like with everything at that age the main impression that settled in was boredom. Playing soccer helped. The village kids wore flip-flops, I felt like a jerk matching up with Nikes on, so I’d go barefoot until someone scolded me about it. But you could only run around the compound chasing a ball for so long. The days seemed endless. The small entourage of village boys following me at all times, creeped me out, was irritating after a while, so I’d end up either watching 80’s action films in my uncle’s bungalow, or huddled with my cousins observing the social intrigue from the back steps of the Big House. People from different parts of the village or neighboring towns would arrive, sometimes with gifts. Older men, big heads, would shuffle in by evening and congregate by the open meeting hut across from the house. My grandfather might ignore them, but sometimes he’d come out with his little chief’s cap on, red kufi, the braided gold tassel. In the first few days my dad might come out, briefly, but definitely, always my Uncle Amana. Nights were pitch dark, no street light, and if the generator went down, or ran out of gas then housegirls would dart around with candles. Big men in the hut. No women. Nodding, drinking, matters of worldly importance. The jungle alive with the sound of crickets. Bats overhead, grazing the treetops. In theory we were related, somehow, to everyone in the village, but the people from the outskirts were like nameless peasants. It was only after nightfall, sitting on the steps with my cousins, drinking soda, that we’d see some or most of these outer people, drawn in by the light, the vaguely festive air. And among them, what we called the yellow people, the few albinos. Adding them up, different ones I saw, over the handful of nights, there must have been more than a dozen. There was a girl with them, more than once, and she was who I’d start to look for every night. It’d be misleading to describe her as beautiful, or to say that was the way I thought about it at that age. Shockingly white, blistered face, dressed in rags. Anyway, I’ve been told to not make every thing I write be about some girl. So I’ll stick to this as a Christmas story . . . 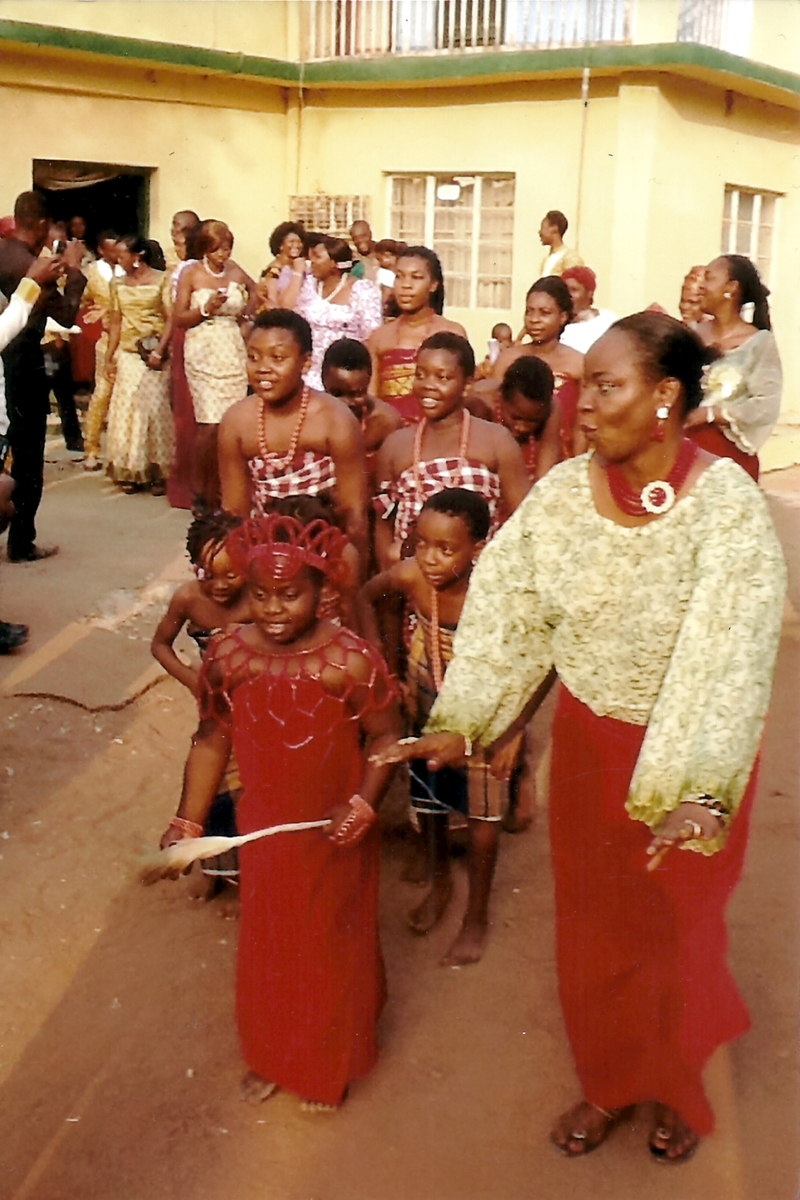 Uzodinma Okehi is the author of Over for Rockwell (SF/LD books), currently on sale for $8.95! http://www.hobartpulp.com/books/holiday-sale